The Dark Hand is eventually something I want to make into a guild, but will exist as an unofficial guild/team for now. This is the current info/ Roster. If you wish to join, you may PM me. Do not post in this thread. There is a discord for discussion of anything involving this guild/team, linked below.

“While the cat is away, the mouse will play.”

The Dark Hand is no ordinary guild. They operate under the cover of shadows, working to eliminate their foes quietly and quickly. Anybody who is a threat will be targeted by the guild and made to pay for their offenses. In short, the guild are like a group of assassins, targeting new threats as they come and eliminating them quitely.

The guild itself does not aim for the infamy or fame other guilds covet, being a very secretive group. There are whispers, however, of a group of assassins who kill indiscriminately, those whispers being of the guild. There are 3 important rules all members of the guild must follow, and the punishment for breaking them can be extremely severe.

The first and most important rule is that members of the guild must not reveal the true nature of the guild. Let people whisper, but their true goals and everything else is to remain hidden to outsiders. The second rule is that once you are a member of the guild, you may not leave the guild without a promise. Upon leaving the guild, you may not reveal any of their secrets. If you do they may place a bounty on your head, or send members after you, in order to retain their secrecy. The third rule, is that although members may seek induvidual infamy, they must NOT seek to bring infamy to the guild. The guild must remain secret, as much as the way it works.

Inaris, the master and founder of this guild, takes the guild very seriously. He is the one to carry out any punishments or lead guild missions, these are not entrusted to aces usually, unless the master cannot do it. Aces are in charge of punishing more minor offenses usually. Anybody else in the guild will not be allowed this luxury unless appointed master, or a temporary master, or ace. The aces are allowed to call meetings and set up other events for the guild, mainly. They deal with more minor things unless the guildmaster grants them permission to do something more major.

The guild itself will not turn away any clients who approach them. They would work for the magic council, or the most evil person alive. They will do any alignment of job, though all jobs are to be done in disguise, or masked in some way unless of legal alignment. There are no exceptions to this rule, you must be disguised in order to take dark or neutral missions.

There are no real morals when it comes to the guild. Members may do as they please, whether that be destroying villages and killing everybody in sight, or helping old ladies cross the street and entertaining sick kids at the hospital. What members do is entirely up to themselves, they get to choose their own path.

However, the guild only has one true goal: power. They aim to accomplish this by working for every side, and obtaining information on every side, for knowledge is power. All knowledge they compile must be reported directly to Inaris, Asura, or an ace. In turn, they will record the knowledge in a single lacrima, the location only known to the masters and aces. The goal of the guild is simple: once they have enough information on every single major guild, group, or organization, they will launch a large scale attack to completely decimate all their rivals. Taking power from the many rivals they have is the ultimate goal.

All members will be recruited by any more trusted member of the guild. This includes masters, aces, and anybody who has been in the guild a month or longer. Upon being recruited, new members will be taught how to open the door to the guild. 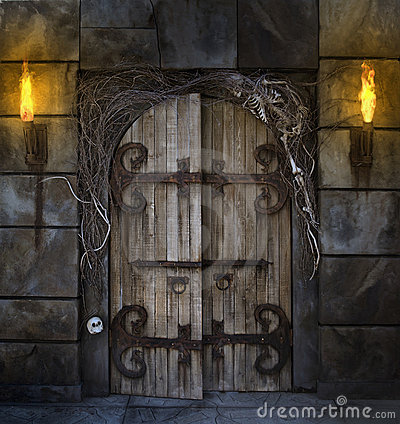 The Dark Door is the entrance to the guild, which will only open for members of the guild. The only way to open the door is declare your name, position in the guild, and intentions, before placing a drop of blood on the handprint on the door. If you are a member of the guild and no malicious intent is detected, the door will swing open, revealing the passage leading to the main hall of the guild.

The Hall of The Damned

The first thing a person sees when they walk into the main hall of the guild is a large alter. The whole hall is lit by torchlight, making it look creepy and as if there are things lurking in the dark just waiting to sink their claws into you. The alter itself is a shrine to the ones who came before, though for the most part it goes unused. Members who wish to contact Inaris or Asura may use the shrine, though an ace must give permission if one uses it to contact Asura.

The Master’s Office itself is quite spacious and comfortable. There is seating for when meetings between master and aces are held, a small recreation area up above, and a bar of sorts for the master to relax at with guild members. This is a space which normally requires no permission to enter, unless a private meeting is being held there. In general, this is the main place where guild members can be found within their guild hall.

The Hand of Death
The guildmaster position, known as the hand of the death, is in charge of the guild as a whole, as well as the guild’s interactions with Fiore as a whole.
Current: Inaris Anicetus

The Hand of The Hand

This position is awarded to somebody in the guild Inaris acknowledges to be of the same level as himself. They serve as co leader and can do anything Inaris can except disband the guild. Ultimately they report to Inaris like an ace, but hold nearly as much power as the master himself.
Current: Asura Seiken

The Unholy
Ace positions, granted only to loyal and strong members of the guild. Because of the guild’s desire for power, in most cases these will be A rank or higher. There are exceptions made for active members, however.

The Inner Circle
Anybody who has gained the trust and respect of the guildmaster, and has been in the guild more than 6 months, fits here.
Current: 0/7

Deathwalkers
These are the members who have gained notably high positions of rank H or higher.

The Tainted
For members who have reached ranks A-S. These hold some influence, but not as much as aces or deathwalkers.
Current: 0/unlimited

Reapers
Members who are C or B rank go here. They have gained a little bit of power, but are not yet in positions to really be influential in the guild.
Current: 0/unlimited

Darkstalkers
Members who are D rank go here. They have little to no influence in the guild, and must prove themselves before they are considered true members of the guild.
Current: 1/unlimited

All news/events involving the guild will go here!

As the guild grows and expands, any benefits such as weapons or jewels for the members will be put here!

All info that doesn't fit in the main post goes here!