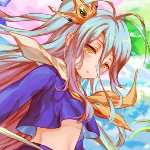 "Aja, they find me cute. I want them all to rot in hell." the guildless demigod told her exceed in her hands, as she kept a blank face and looked straight ahead. As she walked, many people on the sides of the street were saying various things such as "awww", "so cute~", and many more compliments about her appearance, which all she could do is roll her eyes at. She wanted them all to shut up, as she knew that if she was an orphan or ugly girl they would not do the same. "Meow?" Aja, her white and gray exceed said in a confusing manner, as she rubbed up on the bare stomach of Anastasia. Her body looked to be extremely delicate, and her outfit was as adorable as it was fashionable for her age. It was an indigo colored schoolgirl outfit with purple hues, along with a yellow ribbon going over the collar to add contrasting colors. In regards to her hair, it was very long and straightened at the time, while also supporting a golden crown with multi-colored jewels on the top. In one hand she carried her cat, and in the other there was a strawberry flavored snowball that had a straw poking out the top for her to drink. On her back was a sheathed katana, that of which had beautiful designs ranging up all of the sides in floral and watery patterns.

They were in Hargeon Town, a place where she heard was giving out passports. She knew that one would need to be in a registered legal guild or have the neutral insignia in order get one, but she did not care, as she would use whatever force was necessary to get one, quickly at that. As she walked toward the docks she began to sip more and more on her snowball, causing it to deplete in size as the sun beamed over her body. "The answer is 29." Aja spurted out, as Anastasia began to stroke her head and yawn. She would have preferred sleeping on a bench instead of getting a passport, but she did not feel like having to sneak onto modes of transportation that would make her sick. Therefore, she decided to go and get one on a warm Monday, and planned not to kill anyone there unless they pissed her off.

As she got to the docks, she realized that there was a long line of people waiting for their passports in an orderly manner, legal mages at that. "Gross." she said aloud, as she began to walk past those waiting in line while tuning out their moans of adoration that pertained to her appearance. She did not like legal guild members at all, in fact she wanted them to die slow and painful deaths, but she was also too lazy to wipe out hundreds of people at the current moment. As she finally made it to the stand, she witnessed that there were three people sitting there; two men and a woman. They looked to be in silk clothing and did not appear to be mages, but just people that were smart. They were in obnoxiously white clothing, and had their necks almost too exposed.

"Hello dearie, you look so adorable! I assume you are here for your passport?" the woman asked Anastasia, following in the slayer to give her a simple nod in response. "Great! Can you please show me your guild tattoo, or a neutral insignia?" she asked the young girl, as she tilted her head. She planned this all along, something that would hopefully allow her to get a passport without having to prove herself, as she was not in the mood. "Oh dear, I guess you don't have either of them... I'm afraid I can't give you a passport. You can go get an insignia at the train station, or join a legal guild around here! Lamia Scale is right around the corner." the woman said with a smile, as Anastasia met her prism eyes with hers and gave her a glare.

"No." Anastasia said aloud, as she produced three sharp blades of water in-between the fingers of her hand. She moved her eyes around back and forth, and quickly swung her hand forward, landing a single blade deep into the throats of the three legal soldiers giving the passports. "abcde?" Aja asked aloud, as Anastasia watched their eyes quickly widen as blood poured down and stained their white clothing. Suddenly, the three sitting at the passport stand fell forwards onto the table, rendering them each dead. Gasps could be heard from behind her, but she couldn't care less. She was too adorable for any of them to hurt her. She placed the exceed on her shoulder and the snowball on the table as she turned the blank passport machine toward her, taking her picture and slipping out the card with her ID. » You Shall Not Pass(port)!
» No One Gets a Free Pass
» Anastasia's Secondary Training [Solo]
» Getting the Pass [Job]
» Pass Port Please