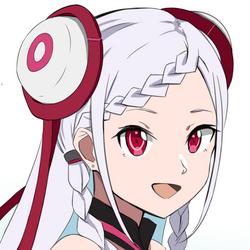 Kaori was sitting in the corner of her restaraunt named Hibiscus, a former pub that she transformed into quite the marvel. The walls of the restaurant was a large, elegant waterfall that wrapped around the entire room. Behind the waterfall, various goldfish could be seen swimming around completely unaware of the presence of humans in their home. The waterfalls emptied into a recepticle that looked like it was made of glass despite being made of a transparent type of steel, making it highly resiliant. In the walls of the recepticle was more freshwater fish that were small enough to not mind the limited space. In the recepticles where the waterfalls empties into, but not in the walls, were koi fish that children could feed if they so desired. The entire floor of the restaraunt was another story, and the only one of its kind... They were made of the same transparent steel as the walls of the waterfoundtain recepticles, and under that was sound lacrima that negated even the loudest of foot stomps. Under that was a massive aquarium with various saltwater fish. The Aquarium hosted blue ringed octopi, lion fish, small sharks, pistol shrimp, several different species of tang, eels, and a couple tasmanian giant crab and crayfish were scuttling about the various corals within. Despite there being so many predators, none of them attacked each other no matter how close they got since they were trained to know three things; when meal time was, what was on the menu, and that there was plenty to go around. The bar counter was made of the same kind of steel and showed many different sized lobster and crab in front it. The backboard was made of black steel, and behind the counter were wooden shelves to hold their various cups and glasses. The overhead shelf was made entirely of bloodwood, Kaori's favorite kind for its dark and rich color. The tables were one with the floor, and allowed the smaller fish and eels to swim up the legs and move about the table tops which amused many of the young children as they ate. A bloodwood staircase in the corner lead to rooms that all had bloodwood floors, but aquarium walls. The hallways were bloodwood to make it so no one could spy on the residents, and between each room was a blacksteel wall inside their walls for the same purpose. Sound lacrima provided privacy, and negated any chance of eaves dropping for the more... intimate residents who stayed the night. Small gaps at the top and bottoms of the steel walls allowed the hundred or so tiny fish move about between rooms. These fish were all bioluminescent salt water fish, and even a few small varieties of squid that put on a dazzling display when the lights were turned out at night. All in all, the restaraunt was a wonderous place even if the food had a less than luxurious price.

It was in this restaraunt that a man wearing what was obviously real fur and not faux was standing at the entrance to the establishment looking around like some tourist trying to find the restroom at a theme park. One of the four waiting staff on duty today, a young man who was working part time as a means of passing time and saving up cash had walked up to him and asked if he could be of assistance. The man was looking for the owner of the establishment, Kaori herself. It was no secret that Kaori owned Hibiscus, it was also no secret that Kaori was a noble in Midi, Pergrande, and Minstrel. Her status wasn't won with cheap tricks, and puppy saving; no, it was bought with blood and a lot of it. The young man told the wealthy fellow that he needed to get to a few of the customers, but he'd check to see if the owner was in. He made his way to a couple tables, refilled some drinks, and took a couple orders before making his way to Kaori herself. "The gentleman wishes to discuss business." he said to Kaori in a soft tone. "Send him over, I'll at least hear him out." she said calmly. The young man returned to the wealthy one and let him know that the owner would speak with him, news that made the fur wearing man quite pleased as it provided a glimmer a hope. The request had come only after a very long story about some tentacle monster that made an old door appear that lead to some place no one can escape, all of it sounded to Kaori like 'something, something, something, darkness' instead of a dangerous place. "I expect my payment to be here when I get back. If it's not... well, I'll leave that choice up to whatever I find behind the door." Kaori said at the end of their agreement, driving home the fact that she wasn't one to be screwed with. She had begun making her way to the door which was presumably in the port town at the bottom of some steps that were blocked off by guards. She wasn't really expecting company, but the restaurant wasn't very loud so it's possible someone was listening in.