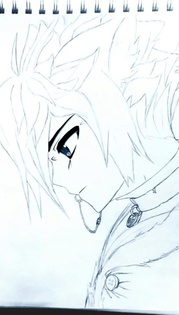 Neyvahn stood in front of the mirror and straightened his collar. There was a blood drive taking place in Rose Garden, and he figured it was a good way to become a functioning member of the guild again. He had been away for about three months, and it's weakened him. All his work since he joined Black Rose was gone. He was as weak as the mage he was before he was adopted.

However, he can't say that he hasn't changed since then.

After he fixed his tie and collar, Neyvahn grabbed the navy-blue sweater and slipped it on. Paired with his morning-blue tie, the bakeneko looked presentable and began heading towards the blood drive. They had it set in a well-kept hall open for rent not far from the Silver Moon Inn, easily within walking distance. It would only take about twenty minutes to get there.

Out the door of the Silver Moon Inn and on his way to the blood drive was Neyvahn. He took a deep breath in and the scent of german pancakes wafted into his nose. The smell was intoxicating, inviting, begging Neyvahn to come to it. And he wanted to. He had to shake his head and pinch his nose to get himself to continue walking. The blood drive was happening now, breakfast could come later.

Once Neyvahn made it to the hall, he walked through the doors and made his way to the current supervisors. They weren't anybody he previously knew. He could tell they were the supervisors because of the way they were dressed: white button-up shirt, black dress pants, and a solid-colored tie. Neyvahn waved to the closest one, a woman with a few wrinkles around here eyes.

The woman waved back, a genuine smile on her face. "Hello, you must be one of our legal mages. Am I right?" Neyvahn nodded and extended his hand out to her. She shook it with no hesitation. "Nice to meet you. Your job is basically to assist the patients in any way you can. The ones that have already been drawn from are over here in the second hall. We have food and drinks set out for them, but some will need your help. Does that sound easy enough?" Neyvahn nodded his head again. "Great! Thank you for your help."

As the lady went off to help another arriving mage, Neyvahn made his way to the second hall. Just as she said, there were tables set out filled with all kinds of food ranging from salads to hamburgers to seafood. On the ends of the table were also plates, silverware, and cups for the drinks. It was quite impressive, really. It was a good way to entice people to donate blood: Have them donate it, then come through to free food and service.

Neyvahn saw another patient come through the entrance of the second hall, a bandage around his arm. He seemed rather pale and thin. It seems he barely made the weight requirement to donate a pint of blood. Neyvahn immediately moved to help and supported the boy by wrapping his own arm under and around the patient's back.

The boy thanked him and asked to be sat at one of the tables. Neyvahn happily obliged. He could tell the boy was also very hungry, so he motioned to the food table. After giving that much blood, anyone would be hungry.

Although confused at first, the boy quickly understood and nodded his head, asking for a hamburger. Neyvahn went to the table and began filling an empty plate with a burger and some other good selections.

Once the boy had some food, he felt much better, and Neyvahn could help some other patients. Throughout the course of four hours, Neyvahn was able to make the atmosphere of the hall much more positive. The children were entertained by his magic tricks (which mainly involved objects appearing and disappearing) and all the other patients felt generally calm after they were done.

Four hours passed and the blood drive finished receiving blood from their last donors. The remaining food from the tables was cleared, and the volunteers began heading home. Before Neyvahn left however, the supervisor he talked to at the beginning waved him over.