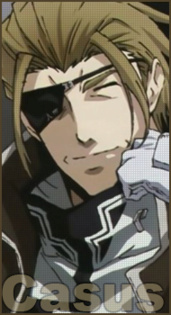 The town of Hargeon was one that just yelled 'sailor city'. People were out and about carrying large containers and crates. There was yelling just about everywhere, either about how someone was not doing their job, how great their job was or about how great their wares were. Casus couldn't help but scope out some of those 'grand' merchandise, but in the end it was all fish in barrels with the occasional fruit, vegetables or meat vendor. But at least the town seemed lively, and the people it drew for today felt a bit annoying. Arriving at the dock where the signing of documents were to take place Casus was surprised at the people that gathered for the same goal he had, and it stretched out to form a long line. Casus couldn't help but curse 'damn it' under his breath as he joined.

Large crowds never sat well with Casus, but the writing was on the wall. The government saw reason to give away free licenses to apply their trade in foreign lands. Now that had never stopped Casus from venturing into those lands in the past, but looking at his previous efforts and the efforts it would take to become a legal mage, join a guild and get this passport it seemed like a logical choice. Casus stood in the back of the line, pondering about how long it would take and cursing the annoyance of bureaucracy before he finally arrived at the counter.

The woman answering him looked almost as old as he was, and seemed to hate sitting there just as much as Casus hated standing their. In a timely fashion his age, place of birth and occupation was asked. It didn't seem to bother the woman that the place of birth wasn't on any map Casus had seen ever since arriving on this continent. Maybe it didn't matter, maybe she didn't care. One other peculiar question was why he wanted to passport, to which he could only answer: ''I'm here in order to ease the burden of illegal and rather dubious ventures of the past by becoming legal. the first and foremost priority of becoming so is getting a pass that says the government actually supports whatever the hell I'll be doing.. But no really I want to visit my granddaughter over in Bosco and this is less expensive than what this old man could otherwise afford..''. The woman gave a wry smirk, seems she actually fell for the 'dry humor' the old man was going for. She stamped his papers, and Casus took it before storming off again. The docks were full of iron annoying men and drunken sailors, and if he could help it he wasn't planning on staying a second longer than he'd have to.

Leaving town and looking back on it once more he could only hope he'd never have to return to such a palace of chaos, not even if it paid well. But of course only time would tell, and people did have a tendency of getting him into annoying situations.