Job Description:
A kindly old man in Cedar has been settin' after taking down the Thassalus, a massive, vicious fish that's worth its' weight in gold if caught. The only problem is that he's a fisherman, not a battle master. He's left a notice in the guild halls and guard stations that he's lookin' for a group of fighters and don't care if they're wizards are meat heads so long as they've got balls the size of his ship.

Starting in Cedar, you have to endure a 5 day boat ride to the Thassalus' lair. He asks you don't bring your own ship if you own one since it'll alert the beast and scare it off. As soon as you arrive, it's party time cause 'ole Thally's waiting for ya.(At the end of the mission he says he'll put a good word in with the shipmasters for you and walks off with a fat check for 5,000,000 Jewel.) 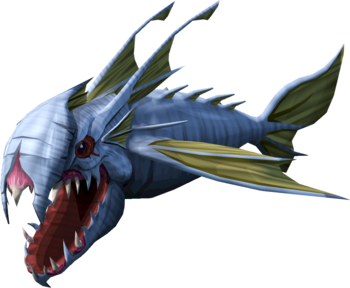 Boss: Thassalus
A monster fish, charging in at 200 feet long with an armoured skull. The Thassalus is weak to magic, and strong to physical attacks. It can dive rapidly and blast itself up under the boat to throw everyone into the water, and there's no land around for miles. It takes 30 B Rank damage or the equivalent to take down. Meanwhile, the other creatures of the sea will be trying to kill you for entering their home.

Weak: Jellyfish
There's hundreds of them in the water.

Normal: Baracuda
There's 15 of these in the water.

Strong: Shark
There's 10 of these in the water, they're great whites.

Re: Fish Are Friends, Not Food • Private, Job [Erika]

And while you are sitting indoors
waiting for the storm to pass
I will be outside dancing in the rain
❧
When was the last time she had made a paper airplane like this? It wasn't something you did as you grew older, normally it was for the children in middle school or lower rebelling against their teachers in class. Astrid hadn't been a rebellious student though. Surprising, i know. But she had seen some of the boys in her class do it a few times. Not just to annoy the teacher, but to see who could make the best airplane that traveled the furthest. Basically, the younger version of comparing... You know whats. Though Astrid had never really been one for showing off in those kinds of ways there was something calming about making the airplanes, a hint of nostalgia maybe, remembering the small classroom in Peace Village when the boys would throw them in the classroom. The elf didn't always have the best relationship with her classmates, seeing as how when she was younger she was terrible at communicating unless it was through sign language. But there was still something comforting about creasing the paper down and watching your creation take off through the air.
Today however? She would not be throwing it at any teachers, nor showing off her paper crafting skills. Simply, she was being a bit of a child. This was going to be thrown at someone, but not for the purpose of a few chuckles, though maybe if she landed this right she would earn a quiet laugh. Rather she was doing it because she wanted to.
The silvernette had recently picked up a job ad from the guild board in a state or sudden boredom, something about fishing for a monstrous beast in the ocean. Seemed fun, and she could use a bit of fun these days. All these missions about saving the world and nuclear war clogging up the board. She missed the smaller, more fun missions. She rarely ever got to go on those anymore with her wizard saint status. They always needed her in front for overseas relations and paperwork and all that stuffy politics crap she could barely even get her mind around. Fishing, while something she didn't normally do, seemed like a fun change of pace. However she would not be going alone. No. What would be the fun in that? And who else better to go with then her best friend? Erika. What, you thought it was Kai that was her best friend? Nope. It's Erika. Super best friends. Friends forever. At least that's what Astrid had thought ever since their last mission. After all she got to see parts of Erika's life that no one else had ever known. That made them pretty close, right? Plus she knew more about Astrid than even Astrid did. That made them even.

The elf hummed the melody of Frère Jacques to herself happily as she sat upon the window sill of her living room, folding the last part of the paper airplane and tracing a finger over the edges. The paper itself was the aforementioned job application. She planned to throw it into Erika's window in hopes she would find it and get what the guild master was asking her to do. Why? Because why not. It was more fun than knocking on her door and waiting to get rejected. Plus it was also to maybe annoy the woman too... Maybe just a little. A slight bit of payback for making her carry her all the way home on their last mission.
Shuffling onto the edge more the silvernette looked over the slick airplane one more time before positioning herself to look out the window. She looked across her yard, spotting one of Erika's (who just so happened to live right next to her) windows that was open wide enough for the plane to slip through. The plan was set.
Squinting one eyes in order to focus where the plane would be thrown she aimed the paper right next to her cheek, lining it up with her sight before letting go with it and watching it ride through the air... But it didn't even make it a couple of feet before it turned upside down and crashed right down into the pavement. Dammit, there was no wind in this under water city. The whole point of making it go so far was for it to carry with the wind. But there was none. A single silver eyebrow twitched in irritation. Oh well, if she couldn't do this the old way she'd just try something else. Flicking a finger towards the fallen paper plane a blue light of energy would shimmer onto it before it would all of a sudden raise into the air once more. Maybe it was cheating to use her magic to make it be able it fly on its own... But really would anyone care?
Gently the airplane lifted off the ground, doing a fancy loop and flying the rest of the way there. If successful it would slip through the window and find Erika wherever she currently was in the house, and then hit her right in the head. It wasn't Astrid's aim to hit her in the head, but magic was always unpredictable.

If Erika looked towards the source of the airplane, she would see the silvernette leaning out the window, making a heart towards her with her hands, grinning happily. If it was genuine or not, who knew. But it would seem as though she was messing with her nonetheless.
916/3,750 ● @tag ● notes
« View previous topic · View next topic »