A new member of the guild.

A new member of the guild.

I am walking across magnolia, heading to this one specific place.
The place i heard stories about them before, Fairy Tail, the greatest guild i have ever known.

I stopped in front of the door of the guild, and slowly, i pushed the door open.
Then i saw people drinking and laughing, some are dueling and some are cuddling, oh how peculiar this guild are.

I walked further into the guild slowly, as i am afraid if i am noticed by everybody, but i do want to be noticed by one person, anybody.

I looked around to see if anybody would come and greet me or something.

Sorano frowned down at the wooden pattern upon the railing as she perched there, mug of tea dangling in one hand as she rests her eyes after another long day of paperwork. In legends and stories, all they ever told of was the might of a guild master, how they would slay foe after foe and lead their guilds to victory. They kinda left out all the stuff about paperwork for just about every little action that was required to be taken. At this rate, the girl was probably gonna lose her eyesight or something. She rubbed tiredly behind her glasses, before taking the heavy rims of and hanging it around her neck on a near-invisible chain that held it up by a spider’s thread. “How does anyone have any energy at all…” Hoshi’s words were uttered in exhaustion behind her friend’s head as Sorano looked up wearily. “Once more, I think I may be regretting bringing us here.” The guild was essentially a huge pent-up bowl of hyper energy, and the two were just about the furthest you could get from that. But yet, somehow, they had made themselves a home here, developed a love of the rowdy guild known both famously and infamously as Fairy Tail.

Yawning slightly, Sorano dropped from the railing, feeling the wind from the exceed’s wings as Hoshi carried her down towards the entrance. She felt like going outside, maybe experiencing the feel of dirt on her soles for awhile before the paperwork called her back. She’d been working on building something like a secondary HQ in Tetsukazu, where they could retreat if needed. After Fairy Tail’s exile a while ago, the entire guild had learned important lessons. But for now? All she wanted was to go outside.

And, well, just her luck. As Hoshi set her down in front of the giant worn-out doors (seriously they had only just replaced it?), another figure – this one with an unfamiliar aura stepped inside. Her eyes scanned across the turquoise-haired figure’s face, taking in his appearance. Definitely had been travelling. It was such a common occasion these days that she barely pause before extending a slender hand. “Pleasure to meet you, traveler. Sorano Granon, current Guild Master of Fairy Tail at your service.” It reminded her of the days Heero had headed over the guild, how new faces were constantly streaming through the door. Guild life was booming, and she could feel that they may enter yet another relatively golden age.
_____________________________________________________________________________________

suddenly a young aged girl slightly shorter than me appeared, her dark hair sweeps and her hand reached out and she said,
“Pleasure to meet you, traveler. Sorano Granon, current Guild Master of Fairy Tail at your service.”,
i was startled at first but then i think fast on how to react, maybe i should introduce myself?
i am facing THE guild master, oh my, i was so scared id just grin.
i took a hold of myself and shook her hand and said,
"I'm Zenith, Zenith Gancelot. I am recruiting for the new member of the guild."
i don't know why but i smiled a little after saying that,
maybe its the hand-shaking .
Noheme 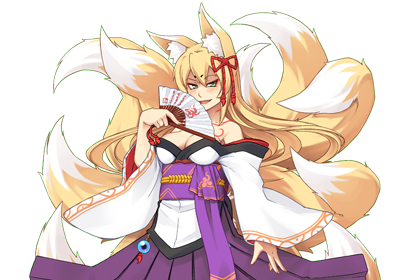 It became a norm for the newest H-ranked member of the guild to spend her time hidden in the shadows of the guild. While she had no real reason to be hiding from the fellow guild members, she felt most comfortable in the embrace of the element that she ruled over. And even from there, she was able to properly look over everyone, aid those who would seek answers to their questions or even protect the building itself if it came down to it. Though, as one would expect, the place was completely peaceful with people simply enjoying themselves, eating and drinking or maybe just relaxing. But she did catch a drift of a certain young female that was slowly heading from her office, perhaps for some fresh air. With the intentions of catching Sorano and maybe having a little chat, the nine-tailed vixen emerged from the darkness, to the outside appearing as if she simply popped out of a shadow cast by the interior decor. She moved swiftly, and with a grin, soon appearing behind the small girl, only to see the same as she did. A boy, standing in the door way. Someone who clearly wasn't from this place. His words made Eris take that hand fan of hers, opening it up and covering her smile with it as she stared this so-called Zennit down a bit.

"Oh my, a new recruit? Seems like more work for you, doesn't it? Guild Master~"

She would tease Sorano a little before sizing the boy up with her eyes once more. Judging from the magical energy he was displaying, he was clearly kinda new to the career of a mage. Perhaps this would be the very first guild for him as well? Now, that seemed exciting!