Get That Chicken! (Job, Solo)

Get That Chicken! (Job, Solo)

Job Description:
Job: Get that Chicken!
Rank: D
Player Requirements: D-rank and above.
Job Requirements: Capture the chicken without hurting it. Minimum of 5 posts of 150 words per character.
Job Location: Clover Town
Job Description: A farmer has recently had a broken chicken house and requires you to hunt that Fowl down! This Chicken however had magical growth hormones injected into him that increased its size to a 5 foot monster! Its peck will deal C rank damage so watch out! Damaging even one feather on that chicken will result in a job failure so it may be best to lure or scare the chicken back into its fence. Completing it will give one grateful farmer his livelihood back.

Once again Aliarey had found herself in the middle of some random location. After her experiences in Hargeon Town she had been taking it quite easy and had not been doing much of anything. Her neck had still been bruised from her last job, but other than that she was quite capable of work. The curse of laziness had struck her. At least the time spent lounging around gave her an opportunity to take in the scenery. Clover Town was in quite a lovely location and the soft breeze of the wind made it even more relaxing. As her consciousness zoned out she barely even realized that she had walked through the town and ended up near a farm. The voice of a frustrated man snapped her out of it.

"I can't believe it! Damn chicken house broke again! If that ain't the millionth time I've had to fix that damn thing."

"Nah. I can't ever capture that chicken. I'll just pay someone to do it like always."

Pay, huh? Aliarey had stopped her walk and listened in on the conversation between the two farmers. The sounds of easy money never escaped her ears. At least, it sounded easy enough. From what she heard all that had to be done was capture a chicken. She really wasn't interested in why he needed help in capturing a single chicken. Maybe the thing was just too fast for him. Either way, it'd be a cinch for her.

"Hey, Farmer Guy," she called out, waving her hand as she walked up to the pair of farmers. "You said you'd pay someone to capture a chicken?"

"Well lookie there, Joe. You found yourself a sucker already!"

"Bah, shut up." The farmer offering the job just shooed the other away and turned to the tall woman standing before him. "Looks like I am now. Think you can handle it?"

Aliarey looked at the man suspiciously. Was he trying to say that since she was a woman she couldn't handle capturing a chicken? Honestly. 'It's just a chicken, right?"

The farmer gave her a nod. "Yep, a chicken she is."

The farmer then led Aliarey to a wide open area, presumably where the chicken was supposed to be. How the heck was she supposed to find a small chicken in all of that space? Just as she was thinking about it the farmer's voice popped up again. "Now you just need to get ol' Shirley into that pen over there. She's a prized chicken so don't go hurting her. I won't pay you if even one feather is out of place."

"Yeah, yeah." As she was about to start her search for the chicken she heard a deep roar come from behind a large haystack. A chill went down her spine at the sound and her survival instincts were on red alert. What appeared from behind the haystack was no cute little chicken; it was a five foot chicken monstrosity! With fear in her eyes she turned back towards the farmer who was closing the fence behind her. "What the hell is that?!" She demanded as she pointed at the monster heading her way.

"That? Oh that'd be Shirley. I told you you'd be capturing my chicken for me."

"I said I'd catch a chicken not Chickzilla!" As soon as the words left her mouth the chicken monster snapped its beak down at her pointing hand, nearly taking it off if she hadn't pulled her arm back as the creature reached her. "Ahhh! You have got to be kidding me!" With no real plan Aliarey went with the most natural plan there ever was...run.

"I guess I forgot to mention Shirley is a bit territorial," the farmer shook his head as he watched the blonde run around in circles with the five foot chicken at her heels. The second famer came over to join his friend and watched the scene with confusion on his face. "Is that supposed to work?" He asked as he rested his body against the fence. "Must be some wizard trick." They both nodded in agreement.

Aliarey was used to running for long periods at a time and thankfully she was faster than the chicken, but even she couldn't stay like that forever. What the heck was she supposed to do? Her instincts were telling her to do two things; run and kill. She couldn't do either of those things if she wanted her reward! Maybe scaring it would work? Bah what would a five foot chicken beast be afraid of! Perhaps something loud would do the trick?

Without letting herself think too much about it, she decided to just wing it. She pulled her pistols from their holsters and quickly turned around mid run while making sure to quickly move to the side as the chicken went by. Her aim was on the ground near the roaming monster and with a pull of the trigger of each gun, shots were fired near its feet.

The chicken stopped and backed up as the magical projectiles landed near its feet. It roared rebelliously at first but as the shots kept coming it found itself backtracking all the way to the holding pen that was to be its home until the chicken house was fixed. Aliarey quickly closed the gate and sighed. She had to use a lot of her magic energy reloading but it seemed to have worked. The job was done.

"Whhheeeewww! Even if you didn't get Shirley into her pen I think I would of paid you just for the show." Both of the farmers had left their front row seats and approached the holding pen. The main farmer checked to make sure it was locked good and tight and then nodded his satisfaction. "Worth every bit of 250 Jewels."

Aliarey's eye twitched. "Just 250?" Her voice came out as a low tired squeak. Was that all this job was worth? It was a giant chicken! Next time it was probably best to get all the details first. Lesson learned. 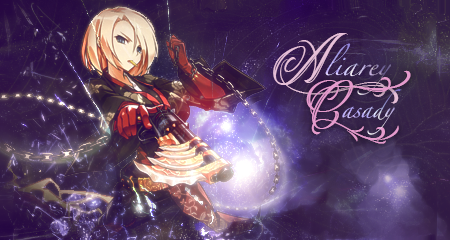