Signature Spell
Name: Abaddon's Clutch
Rank: C
Type: Support l Darkness
Duration: Instant
Cooldown: N/A
Description: The will of Abaddon is manifested through Rei's body during TO form. During her TO Full or Partial transformations, Rei is capable of calling upon Abaddon's will to force his hand into action. This occurs through the process of an enormous black bone hand appearing from behind Rei's back and grasping her. The action is instantaneous as the hand grasps her and displaces Rei into another location within the range(15meters) of the spell's original casting location. Upon teleportation, the large black hand retreats behind Rei's back and disappears until called upon again.
Strengths:

Rank Spell
Name: Echos of Abaddon
Rank: C
Type: Support l Darkness
Duration: 2 Posts
Cooldown: N/A
Description: This spell only works once someone has been plagued with any of Rei's DoTs from her TO: Abaddon. Once damage is incurred from the DoTs, the darkness which damaged them forces the HP lost out of them and into a physical echo. The echo is a mirror of Rei's own image, a doppelganger in appearance only which is used for basic melee damage equal to Rei's mage rank once per post. However, Rei may use these as decoys and even talk through them. The range(15meters) of these echos revolve around the target who has lost HP from the DoTs and the amount of echos upon any one target depends on however many DoTs the target has incurred. The more HP the target looses, is added to the echos, increasing their own HP pool(divided equally between the number of echos on the target): however the echos disappear after two posts whether the target dies or not. When the echo dies, it explodes with a 10meter radius, dealing instant AOE ranked spell damage equal to Rei's mage rank.
Strengths: 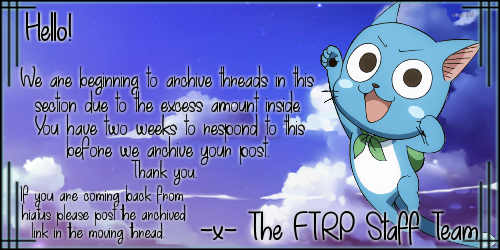