He was moving along the way leaving the place he grew up in and called home but during that unknown start he decided that he should rest because of the exhaustion. The last few weeks had been emotional for him first the build up of if he should leave home and then when he did he was kind of upset about it until something caught his attention but now that had passed and he realised that home was behind him and what laid in front of him was unknown. Due to how he was thinking he banged into a tree and stumbled a few steps back "What good are you lot if you aren't going to tell me when there are things in my way!" he pouted like an angry child for a moment before sliding down the tree pulling his knees to his chest, eyes slowly closing beneath the blindfold as he tried to get the events straight in his mind. "I'm sorry, just..." his voice was low as he spoke he leaned to the side but remained sat up for the most part as if against something solid.
Mitsuki Genji 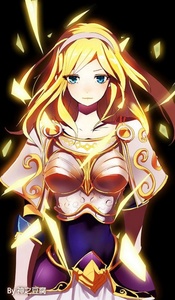 Mitsuki moved through the forest as she was finally "home". How much of a home it was was debatable as it didn't feel good at all. Yet Mitsuki had no choice but the be inside that guild. At least the people she met so far weren't as bad as she first thought, but she didn't meet so many people yet at all. Including the guild master now she thought of it. She discarded the idea going to search for them as meeting them gave Mitsuki Goosebumbs. She could imagine him being rather scary.

Just as she was thinking about it she heard something in the near distance. When she went closer she noticed a boy was banging his head on a tree. Seemed like this person was rather frustrated by something. Curiously as she was Mitsuki went to speak with that person. She had no idea what he was doing here, but it was dangerous out here. And she didn't mean just the animals or the plants.

"Hey there. Are you lost?" She asked the boy. Mitsuki knew her way around the forest, but that was only because of the secrets it held. As she neared she noticed the boy was blindfolded. She wondered why he kept that on, was he blind or something or was his hearing that good he didn't need his eyes?

Even though he had felt the vibrations he didn't pay much mind to it, they where so subtle that he thought it might be an animal, sighing he closed his eyes under his blindfold but sat up abruptly as he heard the girls voice almost like he had been startled by her shaking his head quickly "No, never lost... I always know exactly where I am." he said almost thinking that she was talking about his actual body "You lot can be quiet, you can't even tell me when I'm about to bang into a tree!" he stated in annoyed tone his toes curling into the earth breathing out his lips almost blowing a raspberry in frustration "Oh no, don't mind me feel free to talk amongst yourself not like I need to know things" he stated standing dusting off his trousers and the back of his top.

When done he stood quietly his head tilted to the left for a short time almost as if he was listening to something, though not seen he rolled his eyes underneath his blindfold "Yuui thinks your sweet, whatever that means." he said finally walking towards the girl with long golden blond hair remembering what he was told "I don't know this location, I left home not to long ago" he admitted to her with a slight smile his long white hair and the ends of his blindfold moving in the passing breeze "May I ask your name?" he asked remembering that was important.
Mitsuki Genji

'Okay... Nuts!' Was Lir's first reaction. Mitsuki couldn't help but chuckle a bit at the thought. It was true that the boy seemed to be a little strange, but it didn't seem like he was plotting something.

"My name is Mitsuki Watanabe, a pleasure to meet you. It's alright, I can bring you outside of the forest if you want. And who is this Yuui?" The blonde haired girl offered while deliberately not talking about how she knew the forest so well. There were a few dangerous creatures about, but most didn't came out at this time of the day. So it shouldn't be too much trouble. Her offer was much more because she didn't want him to accidentally stumble across the Savage Skull guildhall and they would have to kill him or worse. Which she most definitely didn't want to do.

Advent tilted his head a little to what the girl had to said to him scratching his head in confusion not realising that she couldn't see the group that travelled with him as he pointed towards a tree "Yuui is standing over there" he smiled thinking that she was just a little silly or perhaps like him she was blind and so couldn't see those in front of her, hearing her name he blinked under his blindfold "Mitsuki?" he seemed to be trying to take in the information but finding it a bit hard as seen by the expression on his face. "Nah, I like forests, they are peaceful and have so many wonderful tales to tell" he smiled once again touching the tree he had previously fell over the root for "I'm sorry about that by the way, if they told me I wouldn't have hurt you" his voice seemed like he was more concerned for the trees well being that if he had actually hurt himself.

True sins are the ones that you cannot atone for.
Golden Lacrima: Valid until December 8th 2019
Mitsuki Genji

Apparently Lir had a point here. This guy was crazy indeed, but at least he didn't seem to be that much of a bad guy. All the more reason to get his sorry ass out of this forest though. Still if anything she would love to solve this without violence as that would beat the purpose of getting him out of here. Either that or he was the best actor she'd seen in quite a while.

"Advent. That's a... cool name." In truth she thought it was as strange as he was himself, so it certainly fitted.

"What are you looking for in this forest if you don't know about it then? Surely you have heard that there are dangerous creatures wandering in here?" While that was true from a specific point of view, it's also to mask the actual dealings in this forest, but she didn't want the boy to get involved with that. Even discounting the guild there were a few nasty critters lurking about, but most would be sleeping at these hours. Since most preferred to hunt in the dark.