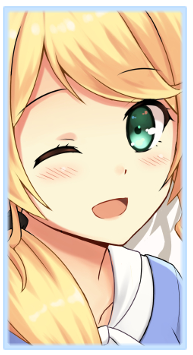 Ainsley emerged from the women's restroom with the sleeves of her blue blazer drenched and her face dripping with water.  Set like beautiful stones in her face, her eyes sparkled happily despite her soaked appearance.  There had been an accident with the faucet of the sink she had happened to use, and it had exploded all over the girl.  Thankfully, a young woman who had been some kind of wind mage was there.  She had dried off the blonde to the best of her ability and sent the female on her way, but of course the spell had not worked perfectly.

Either way, it is definitely better than nothing, that's for sure!  she decided cheerfully.  Rose Garden seemed to be busier than usual, Ainsley observed.  People bustled past on bicycles and on foot, vendors yelling out prices as buckets of foreigners whisked by hurriedly.  Of course it was a city for travelers and visitors, but there still seemed to be more strange people than usual for a day like this.  The golden haired young woman hustled in the direction that everyone seemed to be moving, lest she miss the fun.  Fun it did turn out to be!  For the Magic Council had apparently decided that it was an excellent idea to hire out mages from Fiore to the other nations of Earthland.  This meant there were more opportunities to spread the love of baking around the world, so Ainsley was A-OK with this decision.

She tried to squeeze through the crowd to reach one of the passport stations, but they all seemed to be exceptionally full.  A pout lingered on her face before the blonde made a split second decision and ran inside the nearest building and forfeited any progress she had made with getting into line.  Five minutes later, she ran out lugging a tall stool behind her.  The legs dragged against the pavement with a rough sound, and the bottoms of them had the finish scratched off by the time she made it to her intended destination.  Ainsley dropped the stool in an upright position as far into the mob as she could make it.  After she took a deep breath, the young woman climbed on and screamed at the top of her lungs.

"ATTENTION!  Everyone, could I please have your attention!"  A few eyes turned to look at the mage, and she decided that it was better than none.  "When you get your passports today, I want you to think about beyond just making money!  Think about spreading bakery to the entire world!  Think about... think about cupcakes!  We can create our own world, I say, where everyone are equals but have as much power as we want!  Believe me!" she finished abruptly before toppling off the stool and onto the ground.  At least her spectacle hadn't been for nothing at all.  The crowd parted as though she had the plague. Even if it doesn't seem to be for a good reason, the blonde thought, I have my passport now.  That was fast! she beamed widely.