Our job. Our first job as real true mages. And the thought excited the feverish Atsuro Iida. Along with his faithful partner and best friend Ueno, there was no doubt they could clean up this island in no time.

Unlike Phoenix Island, the air here in Crescent Island is cool and calm. Yet Atsuro knew there was much fortune lurking around. And with great fortune comes robbers and thieves with the same idea: Get the money. The blonde was dressed in his work attire: the longcoat, fancy pants, and his other trusted partners -- Dis and Riso, the swords.

Exposition aside, the two here here for one thing, and one thing only.

THE PURSUIT OF SOME BANK

"Alright Ueno. No plan; let's just take everything we see. If we see a thief; we take their clothes and the money they got. It says on this flyer that we'll encounter a 'Money-Shaker'. Well. You know what to do."

Punching his fist into his palm, it was time they got this started. 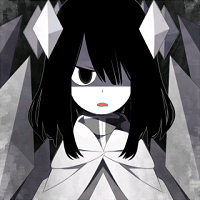 "Aw, hell yeah!" Ueno assumed her spot beside her partner, reading the flyer that he held. A simple job- find some treasure, get some money, and come back in one piece. A training exercise for the newbies that'll teach them how to gather treasure, detect threats, and fight, with a reward of 2,000 jewels, too!

"Where should we look first, though?" The girl scanned around the island for a good place to find treasure. The beach? Possible, maybe a bit cliche. The forest? Again, possible. Maybe a little more dangerous. Well.. The beach was closer, and they couldn't lose each other in the sand, so it seemed like the most logical decision.

"Hey, Atsu. Let's head to the beach." The girl beckoned to her friend as she began jogging off to the sandy beach, confident that they'd find something good there.

When the girl came to a stop on the sandy turf, she took a second to look around. Nothing much except.. A bag of jewels! The girl looked back at Atsuro and pointed at the thing, running over and attempting to open it before.. thud! The sentient bag of money jumped up and smashed into the girl's face, knocking her down. "What the hell?! Is this one of those Money Shakers? Atsu, come look at this thing!" The girl grabbed the neck of the bag and squeezed it as it squirmed helplessly around.

From afar, a group of three suspicious looking men watched the whole ordeal.

The member 'Ueno' has done the following action : Dice Rolls

"Okay! Let's test out my abilities!" Atsuro approached Ueno and the squirming bag. Though he felt a little sorry for it, a little peek in its bag wouldn't kill it, right?
Well, either way. The promise of money made the bespectacled newbie very curious. Atsuro unsheated Dis, drawing out a long and menacing scraping metal noise as he continued to advance on the now terrified Money-Shacker.

There was something about the bag that caught his eye before he struck.

Pulling at the drawstring that kept the bag together, Atsuro's eyes practically reflected the shine of jewels that were housed in the Money-Shacker.

"U-Ueno...! Check it out!" He snatched the bag out of his comrade's hands and tossed the drawstring inside, stuffing his face into the riches.
...Atsuro might've just killed the bag, actually.

But that doesn't matter, because look at all this loot! In just the first hour or so. Coming to the beach was a great idea. Atsuro shot a look at his ally and grinned, pushing the bag into her arms.

Suddenly, a shift in the wind caught his attention. Atsuro turned around and saw a dagger lodged into the sand behind him. Slowly, he shifted his head forward, and saw three hooded figures emerging from the woods. Since the beach was so close to the forest, it gave them the cover advantage, and Atsuro was too engrossed in his bag of money, he failed to see the three sneaking around.

Greediness reflected in their eyes; It seemed they wanted our Money-Shacker.

He used Cowl Tech: Illusory Cuts on the 3 bandits.

The member 'AtsuroRock' has done the following action : Dice Rolls