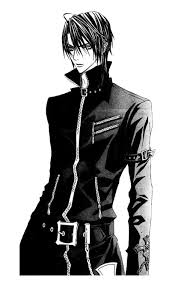 The streets where bustling with with civilians as Shinokage and Fenrir walked through them. He had had chosen a farely easy job in hunting down some lost puppies. The jewel reward was decent and he enjoyed the thrill of a hunt. Today he wore just his black long coat and black jeans with boots. His exposed torso had some scars but none that he cared too much to hide. Shino's blade slightly bounced against his thigh as they cruised around the town in search of the lost puppies. He smiles as Fenrir sniffed the ground trying to pick up a scent. It might have been cheating but they never said he couldn't bring along a canine of his own to find the others. They had started about fifteen minutes ago being told that someone from another guild had also come for the job. Shino not wanting to head back to the guild decided he would stay and help find the puppies since he had nothing better to do. They patiently cruised through the streets of Magnolia Town looking around at the various stores and stands. He didn't buy anything but made sure to look interested at the useless items before him. He would laugh as the stand owners looked up to see Fenrir sniffing around. They almost had heart attacks seeing the massive black wolf with crimson eyes.

After an hour of looking and walking around Shino decided he should probably find the other wizard and team up to find the lost dogs. He was considering this when he hears it. The faintest hint of a noise that if untrained nobody would hear. Yet he did and so did Fenrir who's ears perked up at the noise. He waited a second and there it was again unmistakably. The sound of a puppies bark. Shinokage instantly narrows his black eyes and searched the area but Fenrir was quicker he shot off in full sprint and Shino followed quickly on his tail. The Wolf had the puppies scent. The ran past some pedestrians who almost died seeing the nearly six foot tall wolf run past them. Shino didn't bother to apologize he just ran by a gloved hand on his blades hilt as he tried keeping up with Fenrir. They ran past a couple and then a girl with blue hair. He almost hit her if he had not summersaulted over her. She seemed a bit lost but he didn't have the time to stop and help. Up ahead he could see Fenrir had drawn out the puppy. It was a tiny blur of brown fur and it was fast but not as fast as Fen. The wolf cornered him in an alley way with no way out just as Shino caught up and stopped to catch his breath. He sighed as he walked past Fenrir who was panting a bit but looked quite pleased with his catch. Shino patted the wolfs head and slowly walked towards the puppy who was trembling in fear. With an extended hand he lowered himself speaking softly to the pup,"Easy there little fella I'm not here to hurt you. Don't mind Fen here he's just trying to help.". The pup looking unsure slowly scooted up to shinos gloved hand and sniffed it. The puppy was hesitant but then licked his hand. Shino grabbed the pup and petted it trying to ease its nerves. As the pup calmed down he walked out the alley way and sighed. That's one down now to find the rest.
Shipping Goddess

His first job! The purple haired man was walking through the park of Magnolia and searching for some puppies. Six dogs, the man that was asleep thought. He drowsily walked through the park and recalled the details of the job. 6 puppies, all around Magnolia. That's a pretty wide spectrum, Alexander thought, but no matter. He was being paid, and that was all that he needed. Money to live with rent and food, nothing more. As he drowsily strolled through the park the sound of something that sounded in pain, a high pitched squeal sounded off. If he wasn't as close to the edge of the park, he'd have not noticed at all! Running over to the middle of the road, the man with the closed eyes crouched down and picked up a little furrball, which shivered violently in his hand. It was wet, but he didn't know from what. It didn't rain for quite a while...

Suddenly, a giant thud crashed into Alex, causing the man to fall on his butt, but not before getting a bit of airtime. He made sure to protect the puppy before all else, and then take care of everything else second.

Whatever crashed into him was apparently chasing a puppy, as Alex heard the sound of another squeaky being. Then, the beast was being chased by someone, who Alex assumed to be the owner or caretaker of the giant beast. Knowing this was crucial to his job, Alex bolted after the trio, following them to the alleyway. Once he realized that the person was there to help and not harm, he stepped forward and spoke in the feminine voice that he had to speak in, due to his vocal cords.

Shino was paying so much attention to the puppy in his hands that he didn't notice the woman walk up until she spoke. He looked up to see a beautiful woman. She was about a couple inches shorter than him. She had beautiful short hair and amazing eyes. He almost forgot how to speak. He nodded at her question and looked down at the pup in her hands. He didn't expect her to had found one already in the vast town. Well considering this wasn't much of a job for him he wasn't really trying. He let out a breath and took a good look around before turning back to the woman in front of him.

"Yes, I would be the other person joining in. The wolf is my companion Fenrir. We where about to head out to look for you when we found this little fella."

He held up the dog for her to see. He wondered what guild she belonged to giving the fact that he didn't see a tattoo on her. She indeed was a mage. This he could feel. He looked down at the puppy that trembled in his hand when in barked. He didn't want to hurt the it but if it didn't stop trembling he'd have to kick it away. He shook his head at the thought and extended a gloved hand to the woman.

"Pleasure to meet you miss my name is Shinokage.",he smiles at her and awaits her answer.
Shipping Goddess

Alex accepted the handshake, and put his other hand with the pup inside it down towards the ground, being sure not to drop it. It was, of course, the objective of the mission to gather them all up. Unharmed. Plus, if he were to drop the pup and the pup ran off, that'd be a whole new problem that they'd have to deal with. However, considering that wouldn't be the case regardless, as Alex made sure to remember not let the pup go. On the subject of conversation, this Shinokage person called Alex a "miss," which he wasn't today. Today he was Alexander, not Alexis. Therefore, he had to correct him lest he continue to speak to him in the improper manner.

"Pleasure is all mine, Shinokage. My name is Alex, and it's short for-"

As he was about to say the full name, he heard the super fast footsteps of a puppy, followed by barking. Following it was an angry fish seller with a giant fish in his hands. An odd sight nonetheless, but convinient.

"I'll tell you later, for now we make sure that pup doesn't get whacked by a fish.. I wonder what it did to deserve this. But jeez, now that I think about it, Deus Ex Machina has been on our side. Super large city, yet all pups thus far have been in the same vicinity."