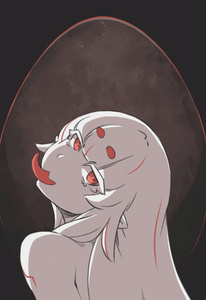 Ada would only smile more as she felt the head patting once more upon her head, the gentle sensation made her entire being shiver with delight as her tails scales began whistling gently from the pleasurable sensation. And as soon as the male left and Noheme told her about the happiness that she helped bring to them, she could only coo gently and see the older gentleman come back out with a bag, stating how grateful the family was. "Chi'lung fut-mei." She said to the man, a way of saying thank you in her native tongue which was not the clicking sounds, it was more of pronouncing the written language her people held, and took the bag before turning to Noheme. "Were to Noheme?" She simply inquired as Ada was ready to move on, what Noheme said before about her wanting to explore was true, Ada was curious of this world and what mysteries it held, even if she wasn't allowed to before.

"Does Noheme have a family, like them?" She asked, not sure if she every asked her comrade about this, wanting to know more about Noheme, even if the goddess was hesitant to tell her anything, all Ada gave was a smile to her. Using her tail to stand up with, reaching the gentle beings eye level and handed her the bag and slipping her hand into it, pulling out a single item which caught her attention. "Umm... what is it?" The confused tone came her mouth as she examined the small object, wrapping her tongue around it to taste it before pulling away to find no flavor to it, using her talons to scratch at it, leaving small claw marks all over it. Ada was unsure of what was given to her and Noheme, but whatever it was; it was shiny and attracting her eyes as she held it up to the sky, wanting to see it sparkle more than before. "Bright like glowing orb in sky." If Ada was happy, then that was really all that mattered. After all, if not for her, Noheme would have never taken a job like this. It was for her sake, and as far as the goddess could tell, it was a success. Not to mention how darn adorable the alien was whenever she was praised and spoiled like this. The girl might not have looked human, but that did not remove anything at all from her charm. In fact, her ivory white appearance was very alluring to the vixen. Though of course, she would not let her primal senses take over, something like that would be very inappropriate.

"Where to? Wherever the wind will take us, I suppose. As for a family... you could say I have a sister, but we've not seen each other in a long time. No other family members outside of that I'm afraid."

A somewhat sorrowful smile ran across her face, but she did not stop for a moment. Since they were done here, they could just start walking away. Ada, however, pulled one of the jewels out of the sack and started wondering what it even was. Ah, that was right... she never explained the currency in this world. In fact, it was unclear if the alien even understood what currency was.

"Make sure to keep those safe. You can exchange them for just about anything in this world. I'll make sure to show you as we go around, worry not~"

And just like that, they would leave the place and head off into the unknown. It was but a start to yet another journey filled with the unknown. And perhaps that was the most beautiful thing about it all. After all, what else could one enjoy in the life if not a little bit of mystery and adventure along with their friends? To the goddess, anything less than that seemed simply far too boring.