Zeno and Tito, being the energetic pair they were, ran all through town, looking for cheap restaurants where they could enjoy a nice meal, why you ask? Because these pair of idiots were obsessed with food, it was one the most important things in their lives other than fighting. While they scanned throughout the beautiful town of Magnolia, where the sun shone so bright, if you looked up, your eyes would be covered in light, they had found a luxurious scent, that could lure anyone towards it. Without a second of hesitation, Zeno ran off towards the scent, with his pal flying closely beside him. As he got closer and closer to the scent, he suddenly bumped into someone, causing the person they bumped to fall on the ground, "Ahhhh! We're sorry!" Zeno and Tito kept saying while bowing continuously until she lifted her head to show one of the most beautiful faces to be seen throughout this world. 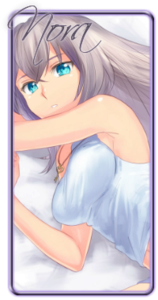 The silver-haired teen had been walking down the street of Magnolia Town in the same direction in which Zeno was running, steadily and calmly making her way to a nearby store to purchase a bag or two of candy. Nora could just envision the sweet taste of her favorite hard candy on her tongue and it made her bust into a giant smile before Nora was suddenly and unceremoniously knocked to the ground. Nora took the hand of Zeno and pulled herself back up to her own two feet. The woman is a slightly-tanned teenager with long, but well-groomed white hair with a pale blue, purple, and pink tint and large, passive green eyes. She is rather slim and about average height for a seventeen year old, and looks like a beautiful young woman. She wears a black uniform of framed red, with a white dress shirt underneath. She knew this person was special as her heart inhabited a weird flutter. "Oh, no problems. I was a bit forgetful of my surroundings there so it's as much my fault. Are you okay?"
_____________________________________________________________________________________

Zeno scratched the back of his head as his face became more red than a rose, "A-Am I okay?....I should be saying that to you." Zeno began with a stutter but ended it with a more calm tone than usual, it was like this girl had done something, his heart was beating at a maximum heart rate and he couldn't do anything to stop it, his palms were sweaty and he felt too nauseous to move, W-What's going on, is this some kind of magic that she is casting on me? Zeno was very confused and his body wouldn't stop functioning weirdly at that moment. "Zeno? Are you okay?" Tito asked curiously as Zeno's face was flushed with redness, until Tito managed to slap him out of it, causing all of those strange effects to wear off. "T-Thank you, Tito!" Zeno bowed down to Tito in happiness making a comedic scene, Zeno was thanking him for getting rid of those weird feelings, though confused, Tito acted like he was a king and that Zeno bowing towards him was a normal thing.

A gentle and warm smile formed on the lips of Nora as she brought herself back up to her feet, not much of a scratch on her to be seen. Noticing the crimson blush on the face of Zeno as he started acting strangely, Nora gave a slight giggle and responded in a soft dulcet tone. "No no, I'm fine thank you for asking.", she said as she observed him bowing to the small exceed as if it was a common occurrence. She didn't seem to mind or think of it as weird - or at least it didn't seem that way.