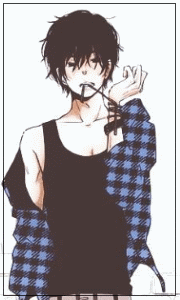 2 hours. 2 whole hours had he been standing in this bloody line, waiting in agony to get his stupid passport. He wasn’t even planning on going outside of Fiore, but just wanted to get his hands on one in case his guild sent him out of Fiore for whatever reason. With only 3 hours of sleep, Alistaire had entered the line at roughly 7 AM. He didn’t really know why he decided this was a good idea, but he was suffering from a heavy lack of sleep so making decisions wasn’t exactly an easy task. Alistaire probably would’ve had an easier time if everyone had just behaved, been quiet and kind. Sadly, there always have to be some idiots here and there that seem to not even own a brain.

Roughly 10 minutes in the line, Alistaire had already been forced to listen to the cries of twin babies, both of which screeched like animals. The requip mage was convinced that these.. things were definitely not human, since the pitch of their screams were simply impossible for a human being to produce. It was truly a deafening and severely annoying experience, but Alistaire managed to keep himself calm.

After what felt like an eternity, the babies finally shut their mouth, only to be replaced by some over confident piece of pure idiocy. Some 6’5” grandpa had decided to cut the line and was now being yelled at by two furious sisters. The annoying duo threw the most creative swear words towards the old man, overflowing the man with insults that mostly attacked his scent, age and looks. The old man had just stood there, back turned towards the annoying couple, completely ignoring the girls who were trying to get revenge on him for cutting in line. Alistaire was tempted to blow all three of them to pieces with Lil’ Beast, but that would definitely cause a bigger fuss. Luckily, the old man eventually let the girls in front of him again, which caused the younger girls to finally shut their mouths.

This isn’t where it ended, though, as there were several occurrences of crying children, people cutting in line and people getting mad at each other. Alistaire couldn’t handle this much noise this early in the morning, but he had no choice. No way was he going to quit the line now, as he was already halfway there. He would just have to suck it up until he got his passport. After that he could go after the idiots that had ruined his morning, and peacefully work them into the ground with his brass knuckles and shotgun.

“Next!” the strict voice of a woman called out, her eyes set on the black haired mage. Finally, finally had he made it. 2 hours of total horror had been surpassed, and he was now being awarded by a passport he most likely would barely use. Still, he was finally being released. “Please tell me your name, age and guild if you're affiliated with one.” “Alistaire Hochheim, 25 years old, member of Golden Phoenix.” Alistaire replied to the woman, his eyes aimed at the desk in front of him where his passport was currently being made. “Where’s your tattoo? “ The woman asked, causing Alistaire to take off the blouse he was wearing over his tank top, showing the light red tattoo on his right arm before putting the blouse back on. “Alright, just look into the camera to your left, and then we’re done.” Offering a quick nod towards the woman, Alistaire turned towards the camera and forced a slightly smile onto his face. He was still clearly tired, but the smile at least made him look a little less lifeless. “Perfect, here’s your passport.” The woman slid the small passport forward, and Alistaire quickly picked it up. Without even checking the passport for any possible mistakes, Alistaire just got the heck out of there as soon as he could. He wanted to sleep.