Flame of the Phoenix [Official "Base"]

Flame of the Phoenix [Official "Base"]

Flame of the Phoenix 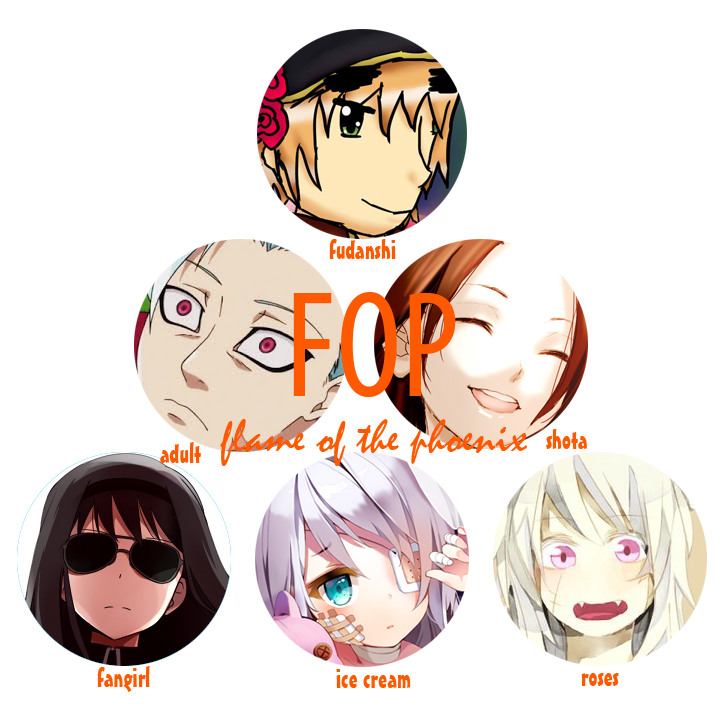 Welcome to the base of the team Flame of the Phoenix! This is a place where our members and honorary members can post random messed up stuff and store items and jewel for other FOP members to take! This is nothing truly official, simply a fun little thing for us to do when bored! All official transactions shall be made over the trading hub.
Team Rules

- All team members must have a Skype account
- All team members inactive for one month without notifying the rest of the team will be removed (There is an exception for longtime members)
- All official members must be in Fairy Tail
- All honorary members must have been in the FOP Skype chat for a month
- The addition of new members must be determined by the majority of the members
Lore
FOP started out as a small team in Fairy Tail made up of Ivy, Gamon, Hana, and Julius, a group of clueless C and D ranks just wanting to boost their exp. Never would any of them have thought that what was once a formal and innocent relationship would become something far more powerfully perverted and messed up.

As time went on, Gamon found himself a girlfriend, bringing Corliss into the team. By now, FOP had a rich and flourishing connection through the powerful abilities of Skype and the chatbox, and Corliss was welcomed with open arms. From this point on, things only got better.

With the arrival of Mura via Ivy, the Skype chat, already filled to the brim with Vocaloid spam and yaoi fanboying, a new level of pervertedness came to life. FOP became a place for fudanshi, fujoshi, otaku, and perverts alike to gather and fangirl/boy, a magical world where hair tastes like ice cream and frying pans are always on the loose, inviting in Salrynn and Terith. And that brings us to the FOP at present, simply a messed up bunch of weirdos you don't want any connections to.

sorano granon | solid script | aura manipulation | no longer human | bank | ftrp deviantart
what the hell's going on, can someone tell me please? why i'm switching faster than the channels on tv?
Mura Kensho

Re: Flame of the Phoenix [Official "Base"]