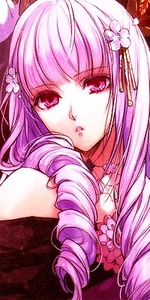 She stepped foot into the bar setting a emotionless gaze to the crowd. She was a eyesore in the crowd with long flowing Lilac hair which has to curly hanging before her, her glowing pink eyes and pillowly lips which slightly shine from gloss. She chose to travel in a more traditional Attire wearing a long Black purple Kimono reveal her bare shoulders showing off the frail skin. She shortly shut her eyes and opened them inhaling and exhaling to calm herself. The atmosphere made her nervous and feel timid but showing it was the last she would do. Keeping her Facial expression like that of a doll she made her way to the bar. Her movement was gracful and elegant almost mistaking it of her dancing by the crowded Tables and other small obsticals she had to pass before getting to the bar. At the bar her hands laid on the metalbar stabilising her strength to life her body onto the chair. She gradually let a gentle smile appear on her face while she talked to the bartender with a gentle voice which was almost hypnotising. "I would like a Greentea please..." The Bartender nodded while disapearing in the back to the kitchen preparing her drink.
_____________________________________________________________________________________
Never underestimate the Dangers of Beautiful Flowers

Vlad was rather bored; having the day off, rather having nothing planned for the day, he simply sauntered around town. While he would usually use this time to further his case, the cause which he shared with Eris, he decided today he would simply look at what had changed in the short time he had aligned himself with her. Sure, not much could have changed in this short period, but that did not mean there was no change. That was an idea which simply made him laugh. With the amount of chaos he had caused, there were surely some side effects.

Her head slowly turned to the direction to the new guest in the bar. Her eyes slightly closed while she focused on several points of the new guest. It was the usual his attire , Posture , certain movement and gestures. It was one of those habits the young lady never really thought to take away. The Waiter came back with her Tea and she nodded slightly. While he prepared the drink for the new guest she slightly sighed.
She felt the stare of some guest piercing into her while they studied her attire. To admit she came from a Wealthy home and inherited also their good looks. For some it would be a pity not to stare. One of her Fragile Hands gripped the cup which was handleless more suiting for Asian teas. By lifting it she supported the tea with her other Hand laying it on the Bottom. Miyu Closed her Eyes while enjoying the first sip of the Tea. Laying it back down she heard a question that was on her from the bartender. "Wish to drink Something else like a Wine or such?" She declined with a settle smile. "No thank you I act rather off when Alcohol touches my tounge... I do not wish to being such havic in this quiet place"
_____________________________________________________________________________________
Never underestimate the Dangers of Beautiful Flowers