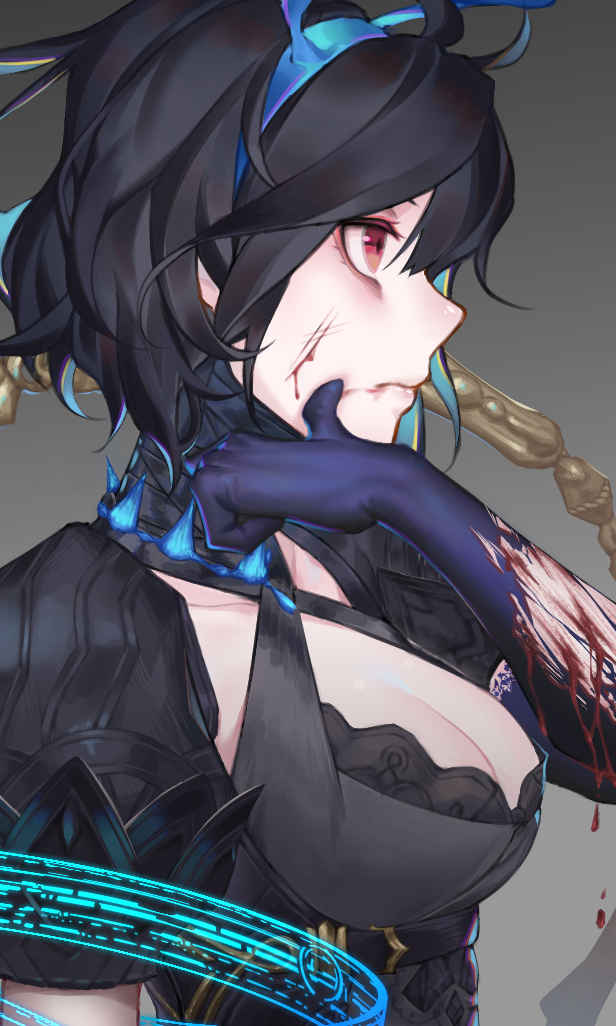 CURSED WITH HORRIFYING POWER
for the sake of my goddess

A nasty murderer was spotted in Hargeon Town known simply as "Jacob Goodnight".  Whether this was his actual name or not remained a mystery.  Blackthorne was in his alternate outfit, meant more for mobility than protection.  Blackthorne turned on his new iLac and searched with his thumb for an image of the target; Jacob Goodnight.  Upon finding his image, Blackthorne commited his appearance to memory; finding it difficult to not due to his outlandish appearance and abundance of weight.  Turning his phone off for the remainder of the job, he started to walk upon the docks during the middle of the night.

The man was cloaked with a mask on, walking towards the lower docks.  He walked until he found himself on one of the docks, staring out into the ocean.  The trap has been set.  Certainly, it would pay more to bring him back alive, but that isn't the way Blackthorne does things.  If he isn't willing to put him into the ground, then he would try to convert Jacob to the Cult of Sin.  However, the likelihood of him taking the offer to join the cult would be slim to none.

"Jacob.  Come out, come out, wherever you are," Blackthorne stated to himself as he watched the waves of the ocean pulls in before receding out into the ocean.  Blackthorne was taunting Jacob Goodnight.  "Unless you are only good enough to target the weak, coward," he stated.  Teapot calling the kettle black.  It had been a while since Blackthorne had to fight someone of his equal to a battle.  The only thing that he had over Jacob, however, was his ability to control parasites where-as Jacob wasn't stated that he had control over any kind of magic; period.

The sound of clacking could be heard behind Blackthorne; footsteps upon the wooden pier.  The sound of clanging could then be heard as Jacob slapped his blades together as if to sharpen them upon one-another.  "I thought you wouldn't come, Jacob Goodnight," Blackthorne said as he turned around to see the target.  He put his eyes upon his overweight topic and chuckled a bit to himself.

"What the hell's so funny, huh?" the man said as he slouched over, swinging his arms from side-to-side as if they were dead-weight.  The chuckle turned into laughter as Blackthorne tilted his head to the side.  "I expected you to be imposing.  I had high hopes for you," Blackthorne taunted once more.  He already knew about Jacob's appearance, but the casual taunt is still fun.

Jacob looked over the masked man and let out a howl.  "Coming from the short-shit with no weapon!  That's rich!" Jacob shouted out in laughter.  Blackthorne put a single hand out with his palm facing upwards before making a flick motion towards him.  Unknown to Jacob, a small tick landed on his clothing, slowly working it's way to exposed flesh and attaching itself upon him.  It wiggled it's way down to jacob's crotch before settling there.

"Making a motion at me?  Well then," he said before slapping his chef's knife and meat cleaver together and ran towards Blackthorne.  "I'll chop you up into little pieces and serve you up!  Stir-fried!" Jacob said in a maniacal manner.

Blackthorne moved his body to avoid a couple of the strikes of his blades.  He was fast!  He held out his left hand once again with the palm up and gathered a bunch of white worms upon his palm.  While doing this, he avoided another slash from Jacob only to get stabbed in the gut with one of his knives.  Blood poured out from his mask before a chuckle came up.  Blackthorne looked up at the taller man and slammed his hand full of worms directly into his face.  The worms burrowed into his face, causing a series of black rings to appear as the worms made their way into his flesh and taking root in the form of circles.

Shouting out in pain, Jacob Goodnight pulled the knife out of Blackthorne's gut, forcing him to put a hand over his gut to stop the blood from flowing.  Shouting out in absolute pain, the target dropped his weapons and started to claw at his face as the tape-worms changed shapes to become a spiked creature instead of smooth tapeworms.  This caused immense pain in the target.

"What is this!  Is this magic?  Why can't you just throw a fireball or something?!  What kind of bullshit is this!?" Jacob Goodnight said as he dropped to both of his knees, continuing to claw at his face.  Blood started to pour out of his face in the wake of the clawing.  Moving his hand behind his back, he pulled out his mace and wiggled it, letting chains fall between the mace head and the shaft.  The chains multipled into 3 and a loud scream sound came from the weapon.

"Before I kill you, Jacob Goodnight, I will give you an ultimatum.  If you join the Cult of Sin, we can offer you strength and power.  You can kill with a purpose instead of doing it for the joy of it," Blackthorne said in offering.  Jacob clawed out some of the worms before he shouted out "Go fuck yourself!"  The tick he threw before exploded, causing destruction and immense pain in Jacob's groind.  Blackthorne then swung his flail, smashing three heavy metallic mace-heads directly into the the man's face, splattering brain-matter and skull fragments all over the place.  After the mace smashes the man's head in, the chain pulled itself back into the mace and he returned it under his cloak.