Gambling with fate and despair 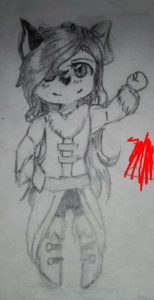 Gambling with fate and despair

The moon would be high in the air over the forest, casting its silver rays onto the pink sea that lay below it, the light wind causing blossom to gently flow from the trees as they swayed and softly rustled away, the sound of animals calling out in the cool night air.

Lanta walks into the forest, after the lengthy bit of travelling he had done to get to it. He had heard of the beauty of this region and very much wanted to experience it himself, along with the opportunity for thought, it was also said to be filled with many types of animals. Some dangerous some passive, so appealed to the thrill seeker within him. He would be deep in the forest now, though had taken mental note of his progress, as he comes to a stop by a large tree, leaning against the trunk as he hums softly to himself. Enjoying the atmosphere this place gave off. "My kind of place." he says to himself, taking out his deck of cards, shuffling through them as he thought about recent developments, his inclusion into a guild, the ball of energy that whisked him there and the strange green haired kid who he had befriended, it certainly seemed like an odd guild. But odd was good, as it kept boredom away very efficiently.
_____________________________________________________________________________________
Characters:
The charming gambler: Lanta Rosa
Magic- Luck of the draw
« View previous topic · View next topic »