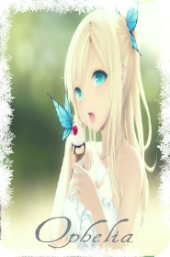 Job Description:
Job Title: Delivery Boy/Girl
Rank: D Rank
Player Requirements: Solo Only, Any Rank
Job Requirements: 500 Words Minimum
Job Location: Magnolia
Job Description: - Oh Dear! It seems the mailman's magic mail truck has lost all power, and he's only got another twenty or so houses to deliver mail to! He'll ask you to get the letters distributed, but he'll warn you he has very little money to give you for it.

Ophelia was so excited for her first job without any hesitations, she run around magnolia like a maniac ready to start her day. "Get ready Magnolia!," She yelled which caught the attention of the people living though she did not care since its her first job and her feelings is bound to that job as it is obvious that she resided all of her introverted personality to just ride in with this adrenaline rush. Her introverted personality suddenly returned when she saw the mailman trying to fix his truck. With a little conversation to inform the mailman that she was send here for the job and meanwhile, the mailman grab his letters and gave it to Ophelia.

She walked to her destined location while she thinks of why did she take this cheap job that was posted on the board. Flashbacks then happen.

"Hmm what is a good job to get today?" She asked herself. "Oh an easy one, what?! it takes two mages to get this job?! How annoying, I wonder if zodiacs count as mage, Hmm... Nevermind I don't like this job anyway." She turned her head into her right and saw something that caught her attention. "A D rank job and a solo one! Though I won't get to use my magic on this job" She suddenly turn excited as she realized its the perfect job for her its safe, easy though its reward is really cheap.

Her mind suddenly focused on delivering the letters to the neighborhood she's nearby already. "Ok this is it." time by time, she delivered almost all of the letters to every person it was sent unto.
"Almost done!" A dog jumped upon her face as it steals the letter out of her hand. "You little -" She tried to catch the dog though she failed trying to. "Grr don't make me use this!" She grabbed the charm of the pig. "Now you'll never get away! Open Realm! Charm of The Pig, Uri! Go track that dog!" Uri sat down saying "I'm too tired...""Come on Uri we need to get that dog!""Fine..."

Ophelia followed Uri as she sniffs her way to find the dog. "There it is! I've done my job" Uri un-summons herself leaving Ophelia by herself. "Now your -" a person calls his dog as it grabs the letter from its mouth. "Sorry to cause trouble but I think this letter is mine," "Sorry I think I scared your dog but I like to thank him from finishing my job." "It's a she..." He argues "Oh..." An awkward feeling surrounds them and after a minute the man nods and thanks Ophelia and after that they went on a separate paths as Ophelia finds the mailman and told him she finished the job.

"The dog of that guy is really a pain but thankfully this day is over" She said it to herself. "Someday I'll get use to this magic, well I really hope so..." Ophelia walked away from Magnolia and heads towards a different place in Fiore.
« View previous topic · View next topic »