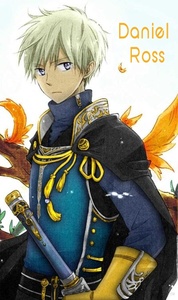 Daniel walked through the gates of the village entrance, and as he walked, he noticed people staring. He kept his hood up, and as he walked, the wind blew his cape around. He saw an injured person laying down on the street, with a healer trying to heal him, so over walked Daniel. He nudged the healer out of the way, pulled out his Medical Scanner, scanned the man, and used another medical tool to close the slice wound. Then he gave the man a medicine, and walked away silently. 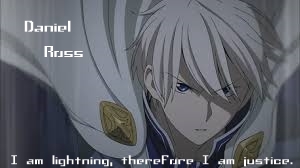 Daniel wasn't the only one that appeared to stick out within the pub and inn. A young looking boy squatted on the seat next to him, his black hood pulled over his dirty blond hair. A mischievous smile on his complexion, and his hazel eyes shooting glances at everything, not keeping his gaze on anything more then a few moments. Within his hand he held a drink, which didn't really look like he should be drinking, cause he looked under the legal drinking age. Which, of course, was wrong. He was probably older then everybody in the building, being a yokai, he lived a lot longer then humans. Itazura, was about one hundred years old, more or less. Which was very old for a human, but he wasn't all that old for his species. Rather complex thing to grasp, I know.
The kamaitachi sipped his drink, and looked over at the man who sat beside him. Setting the glass down on the bar counter he greeted the man "Well hello" he said with a slight giggle afterwards, sort of making himself sound drunk. Which was believable, but he was jsut pretending. Considering he couldn't really get drunk, and he was never sure why. So he always just blamed his high metabolism and moved on.

The kamaitachi kept a smile on his face, and acted as if he didn't notice the powder being dropped into his alcoholic drink from the corner of his hazel eyes. This situation just got more interesting, he originally came over to this man because he stood out from the crowd. Now he appeared to not want to be bothered, that he went to drugging people to do so. Now this, this just made him want to stay and do just that. He didn't care about the morality of that, he wasn't much for morals himself. Plus this man would just be helping a poor drunk out normally, might delay the liver failure for a little while. Made himself giggle slightly, continuing to make himself seem drunk. Of which I said, he can't be drunk, but not stopping him from acting like he was. It might let him get away with more things also, so why the heck not. Though of course, as I've already told you, he isn't a normal person. He isn't even a human, he is a weasel with powers that allow him to change into a human. A yokai, a itachi or kamaitachi.
"I dunno" he said giggly, which was true. He had time and space powers now, but that doesn't automatically make him want to know what time it was. Nor did it help him know was time it was. "So who ya?" he said, not even speaking a proper sentence to the man.

Oh how delightful, he loved getting people irritated at him. Sometimes it made them angry and do stupid things, he loved watching people make themselves look like an idiot. "Please to meet'cha Ross-Kun" he said with a smile and a slight giggle afterwards. Automatically adding a suffix afterwards, one that a person would usually give a younger male, in usually a familiar manner. Though Ross was most likely younger then the yokai, considering his age, being over one hundred. But in no way were they close, considering they just met, and the man didn't really seem like he wanted quality time with little ol' Itazura here. Didn't even really want to talk to him, a lot of people probably relate to the man. The kamaitachi was often annoying to everybody. Grabbing his cup to take a sip, he laughed, muttering 'oops don't wanna drink that', under his breath. So instead he just tossed the cup behind him, why? I don't know, he was uncivilized like that. He continued on like he didn't do anything weird, answering the man's questions. "Nah I'm not from 'round here, I just like traveling. It's sort of my thing, that I do" the itachi said with a little giggle.