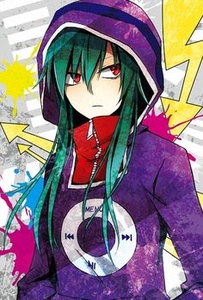 Job Stuff:
Job: For a good cause
Rank: D
Player Requirements: D-rank and above.
Job Requirements: Minimum of 5 posts of 150 words per character. Must use magic creatively to help raise money for a charity.
Job Location: Hargeon
Job Description: A charity (of your choice) is having trouble collecting money for their own cause and needs a mage to be able to attract people to their cause. They hope that a basic mage using magic will attract attention and will in turn give them more charitable donators. Please do your best to be creative with your magics and through RP give the people of Hargeon a small show to remember.
Reward: Nothing, but gratitude.

Maya shuffled from side to side nervously as she stood a good distance away from the donation stand. When Moto had approached her asking to be partners on a job, she had gladly accepted; having partners on jobs tended to take the load off if her experience with Shen was any indication. Plus, this was her first time going on a mission with a guildmate, which made her super excited. But she should have asked about the contents of said mission before agreeing.

Now, she was expected to perform in order to bring in people for the donation stand. She was sure Moto would have no problem with it; she Requipped instruments, for heaven's sakes. The girl would have no issues drawing a crowd with her music (and the way she dressed certainly didn't hurt either). Maya, on the other hand, had massive stage fright issues and wasn't even sure about what she could do to draw a crowd. But at this point, all she could do was mill about and wait for Moto to arrive.

OOC STUFF
Gold Rush Lineage choices for the thread
Passive: Increase your own jewel reward by 100%
Active: The user's luck will become at its peak (as though you needed any more...) and will now have great things overall happen to them. This ranges from getting a simple kiss from that one special person, to having your opponent stumble, causing them to, even if narrowly, miss the direction they were sending their spell at.
Motoaka En'arr

Moto was happily whistling as she walked to where she was supposed to meet Maya. The two were undertaking a job to help a charity draw a crowd of potential donors, and she was excited because that meant showing off her musical talents. The girl pushed a strand of hair out of her eyes that had come loose from her twintails, before approaching Maya. "You ready? You're gonna have to come up with something good to top what I have planned." Teased Moto, knowing full well she wasn't that great.

The girl wasted no time, requiping her guitar so she could start the show. She also requiped her microphone, ready to get this party started. All she had to do was think of a song to play. She was already drawing a crowd, just from the simple act of requiping her instruments. She thought for a moment before deciding on a song, one that was nice and simple, and sweet as well. Motoaka took a moment to take a deep breath, and the began to play. As she played she seemed to glow with joy, something that would attract even more people. Her joy was infectious, spreading throughout the crowd that slowly gathered.

Maya watched as Moto walked past her, teasing her slightly about performing. She knew the twintailed girl was only messing with her, but it still came off as somewhat obnoxious to Maya; even if the results were set in stone, pointing it out still made Maya's blood boil a bit. She followed off after the musician, setting up next to the girl as she began playing.

As Moto began playing and a crowd began gathering, however, Maya's feelings began to change. Moto really was a talented musician; being the music fan that she was, Maya found herself really getting into the song. A crowd was gathering as well; other people were recognizing Moto's skills as well. It was enough to make Maya feel even less confident than she had before; she probably had no chance of keeping up with the girl's performance prowess.

She was so deep in her feelings that she didn't realize her magic was acting up. The Lacrimas embedded in her lit up, shining more and more brightly. She was shining so brightly, in fact, that she started to draw some attention from the crowd that Moto had gathered. Whereas Moto was creating an audio show, Maya was creating a visual spectacle without even being aware of it.
Motoaka En'arr

Moto noticed Maya attracting people unconsciously and smiled, happy that she had managed to do that without even thinking. Motoaka finished up her song as she watched Maya, and then decided to add to the visual display. She got ready, and began singing the lyrics that would set her sound waves on fire, which she would the shoot into the air for a firey effect.

Maya watched nervously as Moto turned her voice and guitar into fireworks, launching fire and sparks into the air. What a showoff, she thought somewhat bitterly. Here I am not contributing, not sure how to contribute to this, and she's just- wait, what? She had looked down and realized how brightly she was glowing. Suddenly, it made sense why people had been staring at her; they hadn't been judging her, she was just part of the show.

But there was an issue. She was glowing too brightly; if things continued, The Lacrimas would blow off their excess right in front of the crowd. She had to either dampen it or redirect it, and right now redirecting certainly sounded easier. Just like she had on the beach and with the security guard in the past couple of weeks, she focused all of her power into an orb in her hands; unlike the other times, where the Lacrimas had been working with her, this orb felt wild, untamed. She'd have to act fast. As quickly as she could, she hurled the orb into the air, trying to get it away from the others. It flew into the air and burst into a large multicolored shine for a few moments. There were a few oohs and aahs from the crowd as they watched the spectacle. Maya just stood there, panting slightly as the spots slowly started fading; the crowd had no idea of what had just happened, and she'd rather keep it that way.
Motoaka En'arr

Motoaka smiled as the crowd gushed over the spectacle Maya was making. The other girl was creating a show, perhaps unintentionally, but she had some potential to turn this into an amazing performance. She hoped Maya had some other tricks up her sleeve, because Motoaka was running out of tricks to use.

Maya watched as Moto set off another spectacle, this time by bouncing sound waves back at herself and shielding herself. She had a very clear advantage here, just like Maya thought. The question was, how long would she be able to keep it up? Throwing around spells like this had to be at least somewhat tiring, especially for novices like them...

Suddenly, Maya remembered something interesting. Maybe she still had more tricks up her sleeve after all, but she'd have to act fast. The girl ducked into the smoke towards Moto while focusing energy into her hands. She got into position behind Moto and placed her hands an inch or so above the girl's back, focusing her energy to restore her energy just like she had with Shen. Not only would it restore Moto's waning mana, it would also cause her to glow slightly, creating a fantastic glimmering effect through the smoke.
« View previous topic · View next topic »