„We’ve recently uncovered na ancient artifact resting deep under the water’s surface. According to legends and our data so far, it should be capable of enchanting one’s body with magical properties, making anyone capable of breathing underwater. Recovery of this artifact is absolutely essential for our research! Unfortunately, it also seems to make any non-human creature aggressive. Which is why we need a mage to dive in that crystal-clear water and beat up some fish! Oh, and don’t worry about the air. We’ve prepared several air-lacrimas that will allow you to do your job... for a while. The artifact looks like a crystal ball, shining with a briliant, red light. Now, chop chop, get to it already!“

-Geoss, the main researcher
Consume the air lacrimas, creating a small bubble of air around your head that allows you to breath underwater for a limited time. Make haste and recover the artifact before you run out of air! But be warned, the underwater life will get in your way because of the artifact’s aura. You also cannot talk underwater, even with the air bubble, which makes communicating a bit more difficult.
Note for fire mages: Your magic will be 75% less efficient once you’re submerged. 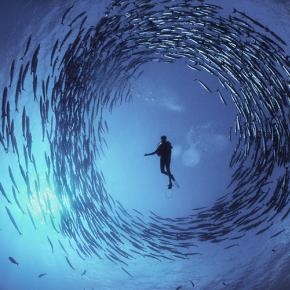 A big group of 20 or more completely normal fishes. They aren’t very threatening, but they are pretty annoying. They’ll try to nibble on you and if you’re not careful, they can actually deal D-rank damage to you. But it should be easy enough to get rid of them by flailing around a whole bunch or using a large-scale spell of any rank. 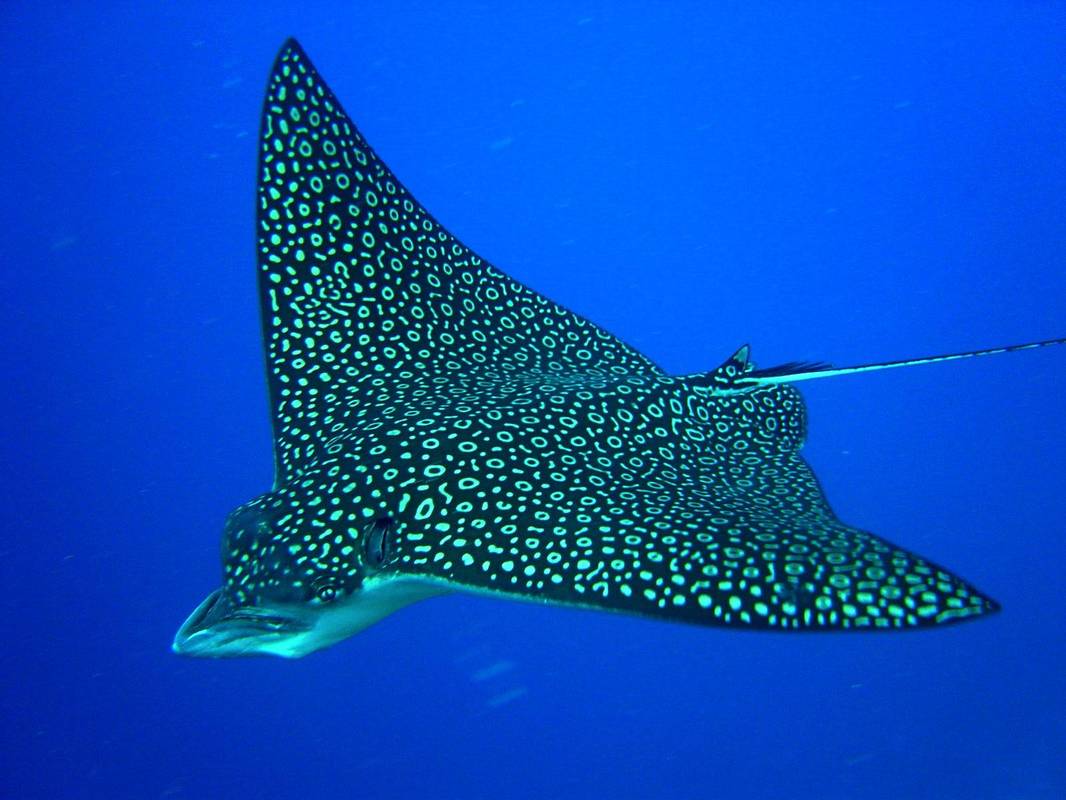 Normally a completely harmless creatures. But the artifact’s aura turned them rabid and now they‘re attacking everything in sight! They will try to ram you, causing C-rank damage and can withstand two C-rank spells before they loose interest and leave.

Dangerous and big! And thanks to the artifact’s aura, they will attack even if they don’t smell any blood. They move fast and their bites deal C-rank damage and make you bleed, removing additional D-rank worth of HP the next two turns. It takes four C-rank spells to make them realize that they’re not at the top of a food chain and leave.

You finally made it to the artifact! But this big fella is sitting right on top of it and refuses to move, which means that you’ll have to use force. It has ten tentacles that will try to attack and restrain you, dealing B-rank damage. It will also spew out some ink at the beginning of the battle, making it harder for anyone to see. It takes 10 C-rank spells to get him away from the artifact, grab it as soon as you can and swim to the surface!

JUST FOCUS ON THAT GOAL

He stood atop the cliff, hands planted in pockets as he stared out at the roiling surface below. “Seriously, Kioku? Out of all the jobs available in the whole entirety of the Archive… This is all you could come up with?” The boy’s gaze slid across the waves, a sick feeling in his stomach. “Hey, Kioku… The job is on the island right? Not anywhere near the ocean, I hope.” When no answer came from the AI who floated silently above his shoulder, Itsuki knew immediately what the answer would be. A slow groan escaped those pale lips, sure signs that the boy was nowhere in his best condition. And naturally, he wasn’t. You see, Itsuki Granon wasn’t just some average grumpy teen complaining at a hologram floating above his shoulder – he was an average grumpy cyborg teen complaining at a hologram floating above his shoulder.

“Granon, I am sure that things will go smoothly. You had requested that I choose a job that was a bit riskier than your past ones, do you not recall? And thus, I picked out this one, a good choice to expand your range or skills and to test how durable your inner system is under the intensified pressure of the water.” In a muted flash of violet light, the formerly pixie-like figure burst out into the form of a full-grown woman, clad in a smart white business suit with smooth long hair that cascaded down her hair. Turning her coldly calculating gaze to the boy who had programmed everything that made her, she transmitted a stream of information about the updates that she and the Project KAGAMI had applied to his system. The boy sighed, brushing away the chain of information. “Yeah yeah, whatever, Kioku. But you do know I have a fear of the ocean and salt water in general… right? Many of my exterior add-ons are made of metal, so they could rust, and then my joints would get all stiff, and I might even lose something…”

He trailed off, as the remaining figure standing there on that clifftop turned her dark, solemn gaze to face his own. In a flare, both their eyes burst into green light as the child-shaped robot reprimanded him in her own way, the electric connection between them – engineer and creation even thicker than that between the hologram and the teen. With a sigh, Itsuki shrugged, turning to the hologram. “I suppose we ought to get started then, am I right?” The violet-haired woman nodded, her own eyes turning a brilliant shade of green as well. It was a trademark of Itsuki’s work. Although his attitude and personality was rather unpleasant, one had to admit that his skill as a robotic engineer was incredible, his fingers having skill to rival a master’s. The ran the lasers up and down Itsuki’s body, checking that all the filtering systems for water was in place. Then, she handed him an air lacrima. “This was provided by the clients.” He nodded in response, taking the orb. Although he was partially robotic, he was still human in most of his needs. Unlike Kioku and Aya, he had to breathe – he had to sleep, eat, and all those things. To add those basic needs with his needs as a cyborg to charge up his system, maintain the delicate wires and circuits as well as both AI’s systems, it was horribly frustrating the amount of work he had to do to keep the three “alive”, if you could call it that.
588o/o 3300
?

Re: Are robots waterproof? [Job/Solo]

JUST FOCUS ON THAT GOAL

Itsuki sank into the ocean, bubbles slowly rising about his head encased within the giant bubble. It was the strangest of sensations, being able to breathe with your head underwater. He floated there, suspended for a few moments as the surroundings were taken in through faintly glowing green eyes. Having activated the extra lens that were embedded within his eye sockets, the cyborg could get a better sense of his surroundings. Curious for a moment, Itsuki opened up a screen of Archive, wondering how well his magic functioned underwater. The screens, surprisingly cut through the waves, barely impacted by the rippling, the text and encoding was crisp and fairly easy to read. Huh. It seemed the teen knew less about his magic than he had ever expected. Turning to the flickering hologram that was currently shrinking down to its pixie size, he sent in a string of code to command Kioku to check how the systems were all doing. After a few moments, during which he could sense the processes pulsing gently within the back of his mind, where he was connected via his magic to the AI. Turning back, Kioku sent straight into the screen before him a report on how the waterproof additions were holding up. A sigh would be quickly breathed out – everything was in order. “Thank you, Kioku,” he would say lightly, surprised once more at how his words came out with barely a rasp of a whisper – no verbal communication permitted, apparently. Did it have to do with the pressure, perhaps?

With this thought drifting in his mind, the cyborg would nod at the rest of his companions, continuing downwards to find this mysterious artifact. Slowly and cautiously kicking through the fluid, Itsuki would suddenly feel the pressure of kicking from besides him. His mop of brown hair swung about, green eyes now flaring at full power into the depths of the ocean. What had that been? Could it be a sea creature? Remembering the job request, Itsuki knew that some sea animals might be aggressive, trying to attack him and keep them from reaching the artifact. It was an odd bit of information indeed, and the cyborg couldn’t help but wonder how such a thing had come to be. Still – it was a job, and most certainly not his place to question the clients. However, if there were to be an enemy? That was his business for sure. Immediately, he had several screens and a holographic keyboard up, fingers poised to enter in a correct code in even the slightest event of danger. He had yet to grow completely accustomed to fighting with Archive, so it was a slightly different experience for him.

Suddenly, a flat shape hurtled out from underneath the sand of the sea floor to flap at the group of synthetics, its uncharacteristically rapid movement showing how obviously messed up it was right now. Immediately, the cyborg would react by entering a chain of code into the machine, pulling out an attack file. A slash of energy burst out from the new window, cutting down the length of the ray’s wing. Take that! A slow grin of self-satisfaction would begin to spread over his facial expressions as Itsuki prepared for a follow-up attack. As expected, the ray didn’t give up easily, and came back for more. Well? Itsuki sure had more! S burst of electricity slipped out from his fingers causing the water around them to crackle. Another ray appeared, seemingly disturbed by the shock. Well, it was okay, This electric shock spell was plenty good at deflecting many enemies, wasn’t it?
1189o/o 3300
?

Re: Are robots waterproof? [Job/Solo]