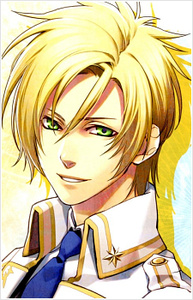 After arriving at the building where Brand's first job was taking place. He looked around and saw a bunch of people in white coats preparing for blood drive that was about to happen. He approached them quietly and before he could even say a word they handed him a white coat. "You will need to take off your jacket sir and put this on." Nodding in agreement Brand slipped off his suit jacket. Smiling a bit while he put on the coat he thought about Sabertooth the guild he had just joined. This would be  the first job he did for a guild and man was he excited. Even though this was just a do good job he was feeling great. There was no better way to start of his life as a mage then to get on the Magic Council's good side. It was Brand's dream to be one of the most well know mages of his time and if this is how it was going to start then he was going to start strong. After realizing he was day dreaming a bit and people had started to donate blood it was his turn to start working. He was to escort the patients to the after care room and bring them food.


Most of the patients where young adult looking to do good and do what they can to help the world. This had put a smile on his face seeing a bunch of young people like himself doing what they could to help. During this time he started day dreaming and a client had blacked out. He dove and caught the young lady at the last second. The room started applauding him as he helped her to her seat. After doing a little bow for the room he fetched her some food. Later that day there was a young child with his mother who would not let Brand go until he showed the child his magic. Letting out a couple sparks of electricity go in the palm of his hand making sure they where very controlled he laughed as the child smiled.

After what seemed like a hundred people where done and escorted to their seats there was an older lady who was struggling to stand up at all after giving blood and the doctors said it was normal. Brand picked her up like a princess and carried her to seat in the other room. After about a million thank yous and retrieving her food it was almost the end of the day for the food drive. Relived that the day was almost over he checked up on the doctors and they gave him a little snack of his own. Putting on his jacket quickly and rushing out the door to his next destination. This would be the first of many jobs for Brand, next he was headed to Magnolia Town to do his second job. He knew it would be the beginning to his adventures in Sabertooth.