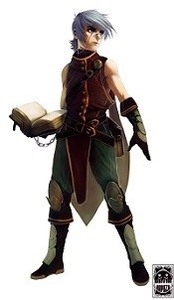 Job Info:
Job Title: iLac
Rank: D Rank
Player Requirements: Any Rank
Job Requirements: 500 words per player
Job Location: Neutral Grounds
Job Description: A brand new device called the iLac has come out and the manufacturer is giving them away to anyone who visits the factory in Neutral Ground. Keep in mind, as soon as you step foot on Neutral Ground territory, all your magic (Primary, Secondary, Weapons, Armour, Pets, Unique Abilities, Passive Effects) is instantly shut down. But that's no problem because all you're doing is picking up your brand new iLac.

Takemi was new to his guild, and to exploring the land of Fiore itself. He did notice that his fellow guild members were in possession of a peculiar item. It was an item he had never seen before, but it seemed that almost everyone was using it most of the time. Takemi made some inquiries about the device and learn a couple of useful things about, specially how to acquire one. One of the most important things was where to acquire it. They directed him to the Neutral Grounds, a place he had also never traveled to before.

"Alright, this should be a very good experience for me."  - he said smiling as he made stepped through the gate of the city.

He stood there for a few seconds, amazed at the buildings and the scenery that stood before him. Tall buildings governed the skyline, people walked in all directions busy with their daily life. Different people, different smells and sounds filled up Takemi's senses as he took it all in. After a couple of minutes of watching life happen in this busy city he set out to find what he came for.

The advice he had received from the guild members was that the factory was a bit hard to explain its location. They told Takemi that it would be better that he asked one of the locals that lived int he city. With that in mind, he approached a small store on the side of the busy main street. He headed inside and noticed that this particular store sold all kinds of clothes, none of them quite like his. He wasn't surprised, because his was tailored specifically for him and it's very suited for his magic. That didn't stop him from admiring all the different that were in stock in said store.

"Can I help you, young man?" - a soft voice said behind him. Takemi hadn't noticed the store owner approach behind him, so he gave a start before answering.

"Oh! Sorry, I was just admiring your stock fair merchant." - he said to the store owner, who was an old lady. Takemi could see wisdom behind those eyes and they scanned him up and down.

"Why thank you, young man." - she said after looking at his clothes one more time. "Those are particularly interesting ones as well."

The old woman raised an eyebrow at him and was silent for a moment before responding, "Ask your question." - she finally said.

"I'm looking for the factory that makes the iLac. I was told it was located in this city. Would it be okay if you told me where it it located?" - he asked the old woman. His eyes never left the woman's face even after he asked.

The woman only managed a sigh. "Yes... fine." - she said a bit defeated. "Everyone is looking for those things nowadays."

She then managed to take a piece of paper from the counter nearby and drew a map for Takemi. She handed it to him but not before giving him what sounded like a warning, "You shouldn't let your life be driven by those things. I'm telling you... those things will be the end of us." And with that she went away to the back of the store from where she had come.

Takemi looked at the map, smiled and proceeded to head out the store and in the direction of that the old woman drew for him. The factory wasn't anything special but there was a long line outside of it. He stood in line for a couple of hours, the sun was setting when he managed to finally obtain the iLac. He put it inside his satchel and proceeded to the exit of the town. There's going to be time to play with it once I get back to the guild, he thought as he exited the Neutral Grounds but he knew this wasn't going to be the last he would visit such a city.