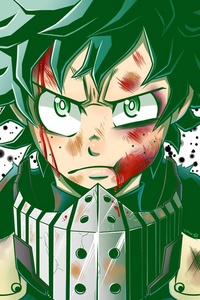 Megálos wiped a bead of sweat from his brow as the shinning sun leered above him still after hours of being on the island. The grill sizzled as he piled yet another pile of meet on the piping hot grill. The sizzle of the meat sounded loud in his ears and the smoky juicy aroma of meat tickled his nose joining with the smell of the rest of the meat and food he cooked. He'd looked toward the three huge extremely long feast tables he'd stacked the feast on. At this point he had enough food to feed half of Crocus. The soft warm sand shifted under his bare feet as he moved about. There was a weightlessness to his steps as he danced about humming a nursery rhyme he'd learned as a child. He had changed the bandages that always wound round his torso twice today. He decided to wear his favorite apron loincloth. It said "Kiss the Cook" on the front in bold black letters against a pink background and there was a cherry red heart beneath those words. His guild mark on his right pectoral muscle shined in the sun as if to proudly display itself. He enjoyed his time at Golden Phoenix it was truly something to cherish. He'd set up shop in this big grove on Crescent Island it was surrounded by palm trees except for the walkway he'd come through and the sand here felt much nicer then most he'd felt. He was probably wearing less today then ever. Well actually other then his bandages the only thing he actually wore was his loin cloth apron.


Megá didn't just have his barbecued meat he also bad fruits bread and vegetables and Prince Fótia his Phoenix comrade was bringing the ton of sweets he'd made yesterday pile by pile. Earlier he'd given the Phoenix two tasks.  Deliver the sweets and to hand out the fliers he'd made last night. They were an invitation. On them it said:


Please come to Crescent Island for an open sparring event. There will be a cookout to feed all participants before any sparring begins. You're welcome to come enjoy the food even if you have no attention of participating in the sparring. Directions to the place are on the back of this flier.

Megá sighed happily as he placed the last pile of meat on the grill. He felt the gentle tropic breeze rustle him playfully. It asked him to play and he promised he'd play another time. The birds chirped happily around him talking about who had caught what fish and who had just finished their nest. Just then he heard a familiar voice in his head as Prince Fótia announced he'd returned with the sweets. Pleased he went to go set up the sweets. It really was peaceful around here all the nature around chattered happily everything sounded like a zen sedated peace. He was really happy. Megá finished up the last of the meat as he looked at the position of the sun. Everyone should be arriving soon. Shade was intrigued by this. A cookout and sparring event? Even he didn't participate it would be a good way to get information on his fellow mages. He walked up to where Mega had set up and looked around. "It seems im the first to arrive. Well then." He said simply. The tall young man sighed and sat down, waiting for some others to arrive so he could learn some things about his fellow mages. His longish Raven hair was stirred by a gentle breeze as he closed his pale blue eyes. He hoped that some other people would get there soon. He wanted to spar, and he wanted knowledge about the other mages. He waited patiently, without thinking of much besides the sparring, and the knowledge.

A crashing sound occurrd as a white wyvrrn, with Lilian riding, flew down. Right after landing, Lilian then quickly ducked for cover behind Marshmallow, the snow white wyvern that was her partner. Her beet red face signified her dying embarrasment and fear of the others looking at her, and she quickly told Marshmallow to greet the others.

Marshmallow gave a screech, shaking the beach to say hello to the others, but obviously they wouldn't get Marshmallow's screech's meaning, so Lilian reached a hand up and waved, yelling to the other two there.

Lilian's arm ducked down beside her body again, covering her legs to make herself entirely curled up in a ball. Why was she acting so afraid? It was because of her state of dress. Her fear kicked in because she was wearing a swimsuit, her fear of exposing excess skin to other people, be it her entirely in the nude... Or by her wearing a two-piece bathing suit. Why was she wearing such a thing despite her fear? Well, ask her brother that!

Two days ago she got this flier, and showed it to her mum, whom showed it to Lilian's brother Gerome. This was convient timing, as he recently won a bet against his sister, allowing him to have control over Lilian for a full day. He cashed it in, saying he gets to choose what Lilian wore to the BBQ and that she MUST go in what he chose. Not only did he find her a bikini in efficient time to torture her, he tried to play it off like he wasn't! Saying. "You're going to the number one vacation spot! You've gotta bring a bathing suit!" Not only this: but he didn't even pack Lilian a change of clothes. At least the color went with her hair.

Megálos welcomed the newcomer cheerfully. He put together one of the more nutritious plates that would fit with the more serious training all the time types because this man oozed it. He thought it was pretty funny these types they reminded him of a certain someone someone and he loved striking them into conversations which was hard to do sometimes but usually worth the effort.  He placed the plate in the mans hands and with his usual super sunshine attitude started to strike up a conversation. "How's it going there friend! My name is Megálos Aderfós! Thank you very much for coming to my cookout I hope you enjoy the food."

As he heard the Wyvern's greeting followed by the young woman's greetings he turned to them and returned the greeting. "Hello my scaly friend," He spoke directly to Marshmallow making it obvious he had understood the Wyvern before turning to the woman and replying to her greeting. "Hello buddy no need to be nervous I don't bite....much." With a laugh he would then turn to the Wyvern and asked, "You seem a little less shy...why don't you introduce the two of you for her. She seems to have gotten a little red." With a teasing smile Megalos sat beside shade giving him a warm welcoming smile and a raised eyebrow.

Lilian's response to Megalos' greeting, Lilian ducked beneath Marshmallow, concealing herself fully. Her face was scarlet, and she balled up to the point of being a child. She didn't even notice the fact that he was speaking to her wyvern... Somehow... Overcome simply by 5e sheer amount of embarrasment she had.

Marshmallow, on the other hand, gave out another screech.

Hello there... You can understand me? Only Lily can!

It would roughly translate to Megalos.

Whatever, I'm Marshmallow. My rider's name is Lilian. She is very shy about her body being exposed, and I think she lost a bet or something? I don't know the specifics.

To anyone who couldn't understand the wyvern, it would sound like a large series of screeches that was meaningless. Lilian, now catching on to the fact that her partner was actually speaking to someone, stood up, and got wrapped in her wyvern's wing, covering everything from her shoulder below.

"You can understand Marshmallow? How is that possible?"

Megalos nodded to the young woman cheerfully. "I can understand him just fine! I can speak to all animals, plants and forces of nature." He would point over to a group of palm tree's a small distance away. "Those three tree's over there are gossiping about to each other about the people on the Island. Oh...that one just commented on how brave you are to sport that bikini...wait...are you wearing a bikini? Cool then you should be able to enjoy this weather even better! Pretty smart idea...maybe I should've worn some trunks instead of this tiny loincloth apron?" Megalos shrugged as if he couldn't change it now so who cares.