She was still without a new lunchbox, that was something that irked her beyond belief,, she had lent that weasel her meal and he didn’t even buy her a new box! Well she’d make him pay up eventually, for now she was worried with what she was going to do today, her bare feet scraping the floor of the space in front of the job board, walking towards it and starting to go over it. Suddenly, she was blushing for a few seconds, shaking off the memories of that man she scanned to see Rose Garden was holding another Blood Drive. The last time they had held one? She’d still been human, incredibly weak and unable to give any blood herself, despite asking to, clearly an undernourished girl covered in burn marks was not prime to give blood. This time her body was healed, they’d likely let her get away with it! However the wind mage had no desire to go to some place filled with blood all on her, after awakening her demon, she had come to lust after blood to a degree that was nearly dangerous! Yet somehow she managed to hold herself back, just barely, in the presence of someone else from Black Rose, her pack and family. She would need to find a new victim, er friend, to take along with her on this job, plus she didn’t want to be the main mage taking it this time, so she could put the lead mage as the other member.

Habaki got caught up in her sight line, it didn’t matter what he was doing, or how far across the room he was, the feline was the first one she laid eyes on. Honestly, Jiyu was kind of fond of cats, despite clearly being canine, her mind often flashing to one panther in particular. Yet it was strange, how she held no hostility towards a species her kind normally chased and terrorized. Of course? One could say that the Ace of Hearts terrorized every single member of the guild, despite her massive pile of fears! Jiyu was cunning and rash at the same time, slowly she had returned to being outgoing, and after falling out with one of her friends outside the guild, she was even more callous than normal. “Habaki~” her velvet voice sung out in an enchanting melody, attempting to ensnare him from the get go, thought it was an aspect of her game that was out of her control. “You haven’t done your first job yet, have you?” she kept her eyes on things pretty well, despite often vanishing to take on dangerous foes! Kazehime believed she had yet to spot this kitty-cat head out to deal with anything of a significant value, or bring any income into the guild. Since he was laying on his ass on his own? The woman figured she might as well show him how these things were done. “I have a job here.” she held the paper up between two fingers, dangling it before him so it could be read. “It’s an easy one, what do you say, want to go on your first job with me?” she pushed the paper forward, offering it to him, as if handing the task over to him with her as backup. Which granted, was exactly what she was doing. “Doesn’t even involve magic, come on~” her voice faded off into her pale pink smirk, her kitsune trailing shortly behind her, racing down the stairs to stand with Jiyu and look up at her admiringly.
_____________________________________________________________________________________ 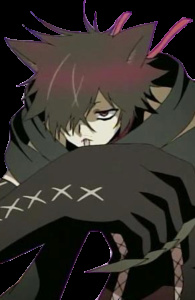 
Habika was jumping around throughout the streets in his cat form. The bell attached to red ribbon jingling with every movement as he explored the foreign area. He thought about the first night here, he had certainly met some interesting people at the time. The black tabby gave a yawn as he continued his way throughout the town. That night went well he would think, Jiyu, Itazura and Kiru seemed interesting enough. The yokai gave what seemed like a chuckle as he considered the little quirks each of them had showed. He honestly couldn't figure out which of the three were more amusing; Jiyu had the ability to pull sweets out of nowhere and he found her to have a nice trait of being sarcastic. Itazura so far seemed almost the opposite of Jiyu, with the whole making food disappear and seemed rather silly. Kiru was a normal human and Habika's limited interaction with those of her species constituted as an impressive enough trait. After almost being stepped on for the 9th time he stopped for a moment and shifted to his more human like appearance. He got a few stares from the humans who were around him but they continued their way after a moment.

Habika stretched out his arms and was going to make his way towards wherever aimless walking would take him. At least until his ears twitched at the sound of his name that came from someone he recognized. He turned to view the one who had said his name. The three bells he normally had attached to his clothing jingled with the movement. He saw Miss Jiyu standing in front of him missing any sort of shirt. He looked at her curiously as she began talking about some sort of job. He had heard of guilds doing jobs for monetary values, but seeing as this was the first time he was in a guild getting some assistance would surely be appreciated. He inspected the piece of paper that Miss Jiyu had given him and after a quick read it didn't seem to difficult of a job."I would enjoy your help." He said as he looked back up with his the seemingly never disappearing smile. He noticed the fox had also come along with her, but he was still unsure how he thought of it. "I don't know my way around the city yet..." He took a quick pause. "So I believe it would be best for you to lead." He finished looking at the one who had offered.
_____________________________________________________________________________________
Cat's Profile
Habika's Claws and Bells
Magic
Jiyu Kazehime

Jiyu really should learn to stop bothering people who were innocently going about their own business, but that was something she really did not have the capacity to do, besides it lead to so many interesting things. If life was not entertaining, than it wasn’t worth living! So she took steps to make sure no day played out exactly the same as the prior one, even if most of her days were filled with work, taking jobs and conquering them for the sake of her climb to greatness. However lately her behavior had seemed maybe slightly more obnoxious and forceful than normal.When she first came to Black Rose the girl had been a mostly passive yet stubborn girl. Once she was kidnapped and rescued the female had been insanely meek and aggressive. Finally her demon blood awakened and she changed once more, but this change was more drastic, still ongoing at point.  Kazehime really would just keep going whatever she wanted in the end.

Her elfin ears twitched sharply as he spoke listening keenly to his words, smirk plastered onto her pale pink lips. Everything he did? Played into exactly what she wanted out of this encounter, and that was just perfect, Jiyu immensely enjoyed getting her own way easily. “And my help you’ll have~” she let her smoke shape into a smile as her hips swayed, feet carrying her back for a few dancing steps, setting the job beside him. Even if it would be more interesting to shove it in his shirt herself? She couldn’t touch him, it was impossible for her to get that close to a man she didn’t know at all, and she was not going to push herself. “It’s best to not try to remember the streets but walk the whole thing until you have it memorized.” of course this was easier on the female because she could sense the magnetic fields of the earth and use them to navigate! So getting lost was a rare occurrence for her, even if she didn’t know where she was the female knew what home felt like and could find it by walking towards that tickle.


Habika had to wonder if this was a normal occurrence for guild members to just walk up to others and ask to go on a job; If it was unique to Jiyu however he didn't know a way to check. He was of course still relatively new to the whole being in a guild thing. He had been on his own for longer than what he could care to remember. The yokai rather preferred to be on his own but being with others had a certain appeal he couldn't explain. He supposed he might find out while coming along with Jiyu. "It seems so much easier to just jump between the builds though." The tall cat man chuckled as he watched the shorter guild mate make some sort of gesture. Habika had noticed that others liked to make varied gestures with their hands, but the cat man had not been able to decipher these. Habika shrugged to himself and followed Jiyu to wherever the job was.

Habika was slightly disoriented by all the turns Jiyu and he had made to get to their destination. On the way he saw more stores than what he had originally noticed during his earlier scouting. He specifically saw a fascinating shop that had huge letters that spelled out 'FISH SHOP'. "I must return here after." The cat said with determination as he broke his gaze when he realized Jiyu had left him behind. None of the other shops he saw were as interesting after he saw the one he now claimed as his favorite; There was however an odd looking building, it was rather large and was painted a nice white color; Near the roof was a big red plus sign that gave Habika the impression it was a hospital. He watched Jiyu enter the building and he followed along. The interior looked as clean as the outside but there was much more decorations compared to the outside; Ribbons that said 'Rose Garden Blood Drive' which were accompanied by a colorful array of balloons that each had their own red plus. The room itself was flat, it would've looked barren if it weren't for the decorations, there were two doorways one of which was labeled with blood drive, and between those doors was a young nurse who had been sending people through either of the two doors.