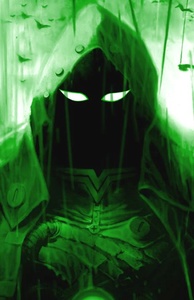 It has been a long and painful road. One that forced a man to take up weapons and don a frightening facade. But today, he finally comes to terms with the things that have caused his despair. She was gone... he had to accept that, and it was after five long years that he could finally bring himself to say that.

The man growled at Norva. "Hey buddy! No cuttin', asshole!"

Norva just tilted his head, the mask hiding the confusion on his face. "Excuse me?" he asked politely. Norva had not tried to cut in any way, shape, or form... what was this guy saying?

"Don't act all arrogant, you piece of shit!" he spat, completely disregarding the fact that his children were there right next to him. They turned to see the exchange happening, immediately fearing the worst.

Norva's head barely moved when the punch connected, doing barely any damage to him, but now he had probable cause for defense. Norva barely whispered three words. "Quippon, War Shot." His right hand flashed green for a split second, a jet black revolver appearing in it when the flash died. Norva lifted the gun and pressed the barrel against the man's head, his finger on the trigger. "If you do not wish your family to witness your death, then you will stand down."

The man froze in place, the look on his wife's face suddenly turning horrified. No one moved, even a few people ahead of the exchange were looking back. The man's eyes went wide, a fearful look in them. His fists were no longer clenched, and he took a step back towards his family. "I-I'm... sorry..." he whimpered, backing away along with his family. The revolver flashed green before disappearing from Norva's hand. He began walking through the parting crowd, but turned back to the family.

Once Norva finally got to the front, he went through the process of obtaining a passport. They recorded his information, all of which was fake, and took his picture. However, Norva did not want his true face to be known. Doing so would compromise his position as a hit-man. With a little help from back alley artists, who happily took his payment of jewels, he was able to don the appearance of a man in his early twenties with white skin and blue eyes. The disguise experts also gave him a simple rundown of the process so that he could replicate it for later use without their help. Fortunately, their efforts were paying off. His picture was taken, his info recorded, and his passport created. Norva took the passport and walked away, ready to begin his international search, beginning with Desierto.

_oOo_
Present Time
Norva walked off of the boat, onto solid ground. That was it... for five years he had looked for her in every corner of the globe, suffered horrible defeats, relished in bittersweet triumphs, and wondered over neutral questions. He had come up short. Norva allowed his feet to plant onto the ground, his body still wavering back and forth. He couldn't find her... Was she dead?