A Taste of Red [Job | Private]

A Taste of Red [Job | Private]

Job Title: Wine Testing
Rank: D Rank
Player Requirements: Any Rank
Job Requirements: 500 words per player, +200 words per player beyond the first
Job Location: Rose Garden
Job Description: The owner of a high class restaurant in Rose Garden has finally finished a batch of his home made wine. However, before he serves it to customers, he wants someone to taste it and tell him if it's the best in the world or not.

The pinkette strode down the street of Rose Garden, it had been a long day and though her wrap was around her arm, her mentality had not been so iron fisted for the morning causing for a small mishap to occur. Sari, the lust demon that resided in her arm next to Yari had taken over her mind. It was slightly aggravating as the celestial mage now strode with a presence of a super model and she made her assets well known. However, she was strong enough to hold the demon back enough so that Sari would be able to chose her choice of her clothing cause god knows how bad that would have been.

The street was jam packed of people and Sari could feel the eyes of the surrounding people on her, sure she was modestly dressed, but her stride said other wise about her personality. A smirk had been gracing the lips of the woman and she would lick them every so now and then and feel the temperature of the male surrounding her rise. It was a thrill to see that she could have such an impact on the people around her.

Today she was off to a wine tasting, which is one of the many reasons that she was wanting to control the body of the pinkette for the day as she had a better feeling for the alcohol and she would be able to give and honest and true answer, after all she waster 100 years old. She had experience. However she was not the only person that would be arriving at the restaurant she knew that there would be one other person. Question would be, who were they? 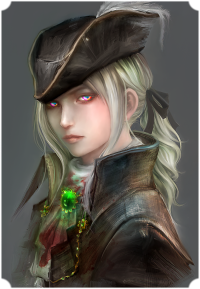 Captivating. Gliding within a breeze held gentle like whispers, vanilla-strings danced in radiance beneath the sphere; spirals clung to white, surroundings blue and it's wake, heaven's life and fear's touch, the sun shined—A figure with quite the ‘curves’, ‘aura’ and smile walked. Marching, worn-many gray ribbons laced limbs called the arms and legs, intertwining in a meeting to the fingers and toes.. Soft-painted face, a silver-crown visor used like a mask concealed the eyes.. Attired, in a dark dress and a shawl flowing behind, the long braid of vanilla trailed... This female, she seemed so beautiful,  despite the worn ribbons.. But so concealed.. So hidden—Light-kissed by the sun, the flesh along her face held in a paint called ivory. Revealing by the shadows and shade she walked, sprinkle upon soft flesh of cheeks kissed by the stars’ blessing, flesh left uncovered offered off an abnormal dance; billions of glitters held radiance—Stardust skin, skin that sparkled, dazzled and shined like stars within the sky, offering a 'glow' off this female.

Aioai, the lost Perishkin and a creature, held hidden within a human-physical appearance, like a Celestial spirit often confused for a Celestial mage due to the platinum key around her neck, held with one side black as if corrupting slowly, she found herself traveling to a place influenced by magic—A place called ‘Rose garden’. Cupped in a wrapped hand, a note folded into a letter held an invitation for her to aid someone in a wine test—Not just some wine, but a wine with magical essence, a strong and most important piece of Aioai’s diet and such making her the a ‘perfect’ choice for this test, even though, noone truly knew of her diet. A set of orbs held two, a color undefined refused to see the world beyond her, a place she felt.. It was so charismatic. Voices held merged together, crowds that occupied buildings and their streets, along with stares that felt like daggers as many found themselves lightly moved as they greeted the spirit, a spirit that desired not to speak and had already found herself out of place.

Blossomed over lush soft-pink lips, a curl held in the appearance of pleasure; she appeared happy. A facade held to a false form as everyone would see, not just a smile, but more—Packed places made her feel uneasy, the wild life that co-existed with the crowd made it not so bad.. She could feel it, she didn’t feel completely out of her element. Trailing along the sidewalk, the girl that did not desire to see, or maybe couldn’t see knew her surroundings. Appearing before the restaurant, she made her way in, offering the note to the first person whom questioned her—Not that it was a problem, but couldn’t have those tricksters getting a free taste when not invited.. That’s how people get ahead, not everything was fair.

Deep wooden frame, spotless glass and golden knobs, the entrance door held vines with roses, a sight that was pretty.. A sight that she could see without the usage of her eyes—As a man pulled the door open for her, she walked in.. A winery with rosy-decor giving off the romantic and enchanted feeling—A corner, no more like a bar with a sea of tables made of glass and held with gold, matching the chairs that had a crimson cushions. On a nearby table, not too far from the bar, there was an oval-shaped table with a folded paper for the invited, it appeared it was only her and seemingly someone else—It was so empty, but it didn’t take away the beauty, to her, it only added.

Taking her seat within the center of this room, under the chandelier as she waited for this other participant—One that would soon find themselves in the presence of a spirit held like a myth, one that did not know of it’s true nature and it’s tie to the key around their neck. Occasionally, her head turned left and right as she looked around,as if she was trying to 'spot' the other, or maybe, they were in a different area and had missed eachother
Health: 000 • Mana: you • Words: 675 • Theme: Link • Aioai: Link • Picture: Link
made by Wolf of GS
Alivya Tarrin

Sari walked through the front door of the restaurant where she would be wine tasting. There in the middle of the room under a crystal chandelier was another person. She was adorned with white hair and horns on either side of her head. She was elegant. Ooo, how she wished that she could have had that body instead of the one that she used now. But, then again if she were in that other body she would have been more suspected. It was exactly the body that she would wish to be in.

A sigh escaped the lips of the pink haired girl before she walked forwards to the table before looking at the woman who sat across from her. There was a slight spark between them, not that of a good one either. Hey eyes narrowed before she pulled the seat out so that she could sit down.

Her eyes never leaving the face of the person across from her the young woman took a seat. They were both here, the tasting could commence.

As if someone had been watching a young waiter ran out of the shadows and placed two glasses on the table before pouring a little bit of wine in each glass. Raising a single brow the Sari picked up the glass and lifted it to her lips taking a sip of it before closing her eyes for the first time and running he red liquid over her tongue and tasting it. It was slightly bitter as a red wine would bit, it there was an under laying sweet taste. It would be good for those who would want it with a steak.

She placed the glass back on the table, not waiting for the person across from her the waiter appeared again and offered her a refresher before pouring her another glass, this time of white.

Lifting it to her lips the woman sniffed it first. There was something wrong with this wine. It smelled sour. Pink eyes narrowing Sari stood from her seat and threw the glass with the white wine onto the floor. The clash of glass hitting the concrete had whispers coming from around her.

Snorting the girl swiftly kicked up the neck of the wine glass with her foot and swung it around, nailing it into the neck of the person that had been coming at her from behind. She ripped it out and allowed for the body to fall to the ground. This was no normal restaurant. She knew, from the moment that she had tasted the red wine. It was traced with blood. The sweet iron after taste, there was nothing like it, if a person didn’t know what it was previously they would have found it addicting and drank the entire bottle. But she had been around for hundreds of year she knew better.

She was not bound to be fooled.

Her body emanating a red glow and her eyes flashing a dark red and black the girl disappeared into the shadows with the assistance of her spirit.

This wine tasting was not so, it was spilling red.

» The Finest Taste [Private]
» The Taste of Blood [Private, Quinton & Eris]
» A Date Gone Wrong [Nessaj|Job - The Sweet Taste of Jealousy|Private]
» How's That Taste?
» Taste of Their Own Medicine