Luna vs The King (Job/Moekidu and Muu)

Luna vs The King (Job/Moekidu and Muu)

A gigantic shipment of Lacrima that was supposed to reach Era days ago has been stolen by an organization calling themselves. "The Cartel", your client was one of the victims of this assault and describes them as brutal warriors, with both skill and determination. They do not quit, and will chase you if you flee. They will let you live, if you give them what they want. Otherwise, they are completely ruthless. They beset them on their journey through a nearby area, and retreated into the Desert upon accomplishing their goal. You set out from whichever town you accept this mission from and head there immediately. They wear white turbans that cover their head and mouths completely, are draped in all black desert robes, with white boots; which are quite dusty no doubt. The Cartel's HQ is built inside of the old ruins of a once great city; you can spot the ruins of the ancient city from a mile off, and see the white and black turban outfits of the Cartel from a distance. Although they may spot you as well at this distance. 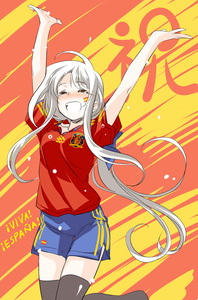 Re: Luna vs The King (Job/Moekidu and Muu)

Justicia Lorelei
Last of the Knights of Lorelei
Their meeting happened so fast, it was uncertain whether fate brought them together or not, but one thing’s for sure that they all had the same quest. Apparently the job was distributed to three guilds and for some twist of fate; they managed to meet at the client at the exact same time. Justicia of course didn’t use her real name but preferred to be called Moe on this mission, she didn’t even told her partners about her guild and claimed that she was a freelance who wanted to do a Big mage’s job. If anything, she’d just go with the flow and see what course of actions her two job partners will take. Regardless of what guild they come from, Justicia didn’t seem to care as long as she’s gonna have her brand of fun.

She did expected to do this mission alone just for the fun of it, she never gotten that chance, she was hoping to be a bit independent. Well now, there’s no harm in coming into a team, and as they say, the more the merrier. She strolled along with the two mages with her hands behind her back; she would sometimes try to skip, just to see how prints of her footsteps would be made on the sandy dunes.  “Sounds good to me” she replied, in fact she was excited to experience what it was like to fight with a limiter for the very first time. She’d simply stay in one place in particular; ready to move as soon as Luna and Muu would engage.

However she got distracted.

A little scorpion just crawled out of the sands beside her, Justicia gazed at how beautiful the scorpion looks, it was fascinating to see a scorpion come out from the sands for the first time. “Cool!”

Pray that the plan Luna had in mind won’t be jeopardized by a single arachnid.

Template made by Edel
Muu

Re: Luna vs The King (Job/Moekidu and Muu)

IC:  Muu doesn’t like the fact that he’s taken up a Job, especially with people that’s not part of his Guild, but he was really bored at that point, which also meant that he’d get to get into some action, but also means that he’ll be getting some money, which is always good because he was broke as hell.  But, what’s setting him off is the fact that’s working people that’s NOT part of his Guild…..  As the woman talks, he’s assuming she’s the “leader” of this Job, he somewhat pays attention, as the things that’s going on in his mind right now would be how he could dispose of their bodies, should it ever come time to it, which meant he’d take the full amount of the Jewel that the Job offers, while also making sure it wouldn’t be traced back to him.  He hears the last part of her statement, which was that he would have her flank, then hears the other woman saying that it sounded good to hear, which he just merely nods his head to them.