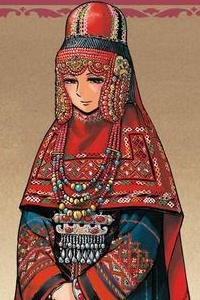 Basima had a love-hate relationship with the concept of love itself. If given the right touches, love can be a very free and therefore perverse thing. On the other hand, it can also be quite imprisoning for a person and therefore a source of delight for the woman. Sitting before her was an example of the latter. Avery Trichet was a skinny and sickly man who apparently had the curse of being a hopeless romantic (from what she could tell from the letter he'd sent anyway). He had invited the dark mage to his overwhelmingly humble cottage at the edge of cedar on a sad and rainy day, which perfectly summed up how the poor lad seemed to be doing. For ten minutes, Basima sat as patiently as she could in a comfortable little chair as she watched the man-child cling to a photo of a young and buxom girl with tears in his eyes.

"I enjoy the view of your cottage, young man, but it's not enough to keep me here. Explain yourself." The impatient tone of voice hardly matched her warm smile.

"It's-" He sniffled a little more, curling up in his chair as he could barely talk straight in his emotional state. "My brother... he's a bastard who steals everything from me; my inheritance, my right to be knight, and now my woman!" He held the photo of the woman up for Basima to see once again but apparently did not impress her much.

"A thief, huh? Sounds like he's due for some prison time..." Basima mumbled to herself but the emotionally-wrecked Avery apparently didn't notice.

"They've been dating for months now and I think he's finally going to propose to her. Damn him!" The distressed guy pulled out an envelope from his moth-ate jacket with his shaky hands. "I got a plan though! It kills me inside to do it but I wrote this letter here to salvage my love life. Listen closely... You're going to stop that bastard from reaching that angel for their date tonight. Then, and this is the key, you have to deliver this letter to her and tell her it's from him. The rest should handle itself."

Basima did not bat an eye. She thought the plan too simple to achieve the results that Avery desired. She felt compelled to take assist regardless. "Where can I find them?"

Avery got up form his seat to hand the woman the envelope and a bag full of what Basima presumed to be Jewels. "My brother, Matthew, will be meeting Vicky at a lone oak tree north of here. Matthew should be heading up there from the south if he's just getting off his job."

Basima arose from her seat and grabbed what was handed to her. She did stay to chit-chat or enjoy a cup of tea but only uttered the chilling words, "I will make sure this Matthew does not see your dream girl but know this: you will never see your brother again." She did not bother to look back at his reaction. Avery was too imprisoned by his own infatuation to care anyway.

When Basima left the little cottage, Jail Bird appeared from some nearby trees and landed on the woman's left shoulder. A light drizzle rained down on the two but it was weak enough that it bothered neither, with Basima protected by her own thick robes and Jail Bird by its tough feathers.

As she walked down the southern path into the forest, Basima whispered to her loyal vulture. "Our target is a man coming this way along this road. Find him." Jail bird reacted without doubt and flew off the woman's shoulders in search of its prey. Basima was left to wander down the road as she waited, humming to herself a little prisoner song she picked up until she heard the caw of her bird. Though the bird could not speak Basima, she could at least interpret the wildness of his eyes as meaning Matthew was on his way.

Basima ducked into the trees on the side of the dirt road. Her robes tore a little at some of the low wet branches she passed by, but she felt certain the trees themselves would adequately protect her presence as she waited for Matthew Trichet. When the man finally neared Basima, the light drizzle protected the woman from exposing herself as she chuckled at the sight. Avery's brother was far more fit and handsome than himself, and it was ridiculously easy to tell why this Vicky woman would prefer him. Still, brawns did little against magic. Basima raised her hands through wet branches and bushes. With one step forward, Matthew bumped his nose against the glowing wall of his new prison. Trapped on all sides by a magical cube, the man could only look around in an alarmed confusion.

The robed Dark Mage stepped out from the forest with Jail Bird on her shoulder. Both looked very hungry.

"You are Matthew, yes?" Basima pressed her face against the wall of the magical cube and watched as the man nodded with a quick gulp. He obviously felt a great threat. "Oh yes... You are going to make a great prisoner." A creepy smile formed on her face, still pressed against the cube splendor, as she pulled out a couple of chains and shackles from her large robes.

Twenty minutes passed before Basima found herself watching the lone oak tree north of Avery's cottage from behind the bushes of the forest.. It was still raining while poor Vicky stood beneath the tree with a little umbrella. She seemed so crushed that her man had not yet arrived. "Jail Bird..." Basima held up the envelope with the letter for the vulture to take from her. "Take this to the young girl."

Jail Bird snatched the envelope with his beak and flew off the woman's shoulder. Basima did not bother to watch the result for she had fulfilled her end of the bargain with that. Whether it would work remained Avery's problem. Jail Bird felt the same apparently; he flew past the woman and dropped the envelope at her feet before returning to the forest to catch up with his master. Neither Basima nor the bird cared for the wailing cries they heard.

Two nights later, at Basima's little shack, the woman undid the hatch to the secret compartment that led to the little chamber below her home. She gracelessly descended the wooden ladder and was met with the cawing of Jail Bird sitting atop a wooden post. She greeted the bird with a slight head nod and looked around at her mediocre prison which consisted of two cells carved into the stone wall. The single candle on the wall light both well enough to reveal one completely empty and the other occupied by Matthew Trichet. The man wore a measly sack-and-cloth uniform with cuffs around his ankles and wrists.

Basima held up a tiny piece of bread impaled on an iron stick and warned the man, "It's feeding time, prisoner #1."
« View previous topic · View next topic »