Job Details:
Job: Play Pretend!
Rank: Rank D
Player Requirements: 2 members only, D-Rank or higher, min of 150 word per post, min of 5 posts per player.
Requirements: Only male wizards can take this quest.
Location: Clover Town
Description: Serenity and Hope are local girls from Clover Town who's parents are coming to see them this weekend. The problem is they have been lying to them saying that they both had boyfriends who were mages as they were too ashamed to tell them that they were still single. Instead of telling the truth they've decided to hire wizards to pretend like they are their boyfriends.
Prize: 750 jewels each.

With the success of their last job Gil had invited Kai to accompany him on another job. To claw their way to the top, to make allies with the unsuspecting, they had no choice but to start from the bottom. Which is why the two would be on a rather odd job to say the least. Pretending to be two girl's boyfriends for their parents. It would have been a trivial job if not for the two girls and their parents whom were of some importance. Just like the last job, the parents knew people in not just within the Magic Council but also within Fiore's castle.

"Remember we're here to build contacts and create an impression. So do try to act like a gentleman."
Gil sent one last crimson glare towards Kai before knocking upon the door to the two girl's home, the two Tartarus mages had arrived just before the parents were due. All they had to get through was an afternoon lunch, and make an impression. 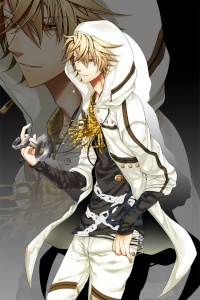 Fine fine. Lets just do this job already. Kai would tell Gil before they would then be greeted by the two girls inside of the house. They seemed rather sweet, such innocent little scared smiles. Who did they expect to arrive? Probably the parents if the Dream Mage had to guess. Hello there, my name is Vincent Haru. And I believe you are the ones that have looked for mages to help you with your situation, correct? Kai formally asked them before he placed his hand outwards to one of them, gently holding her palm before giving the back of the hand a giant kiss. The game of flirting would help him, it used to be so fun. Now it actually had some use. His would place his head back up before he'd release the hand. So may we enter your house? We have much to talk about. The Blonde would explain, waiting for a reply. He personally wondered how Gil thought of this new version of him.
_____________________________________________________________________________________
Main

Serenity and Hope looked just as naive as their request had made them out to be. "Perfect." The two were plain in appearance, to most they might have even been considered cute, but to Gil it was plain. Kai was quick to make a change in personality once the girl's had arrived, not just his personality changed but so did his name. "I'm Gillian Nightray." He introduced with a smile that made most women swoon. Gil was handsome enough in appearance alone that he'd have little need to flirt with the girl, her name was Hope he believed. Besides it made the two males contrast nicely, a fun flirt, and a reserved handsome male. Once the two girls let the men inside, they were greeted with a homey atmosphere. The girls chattered idly, Gil saying a few pleasantries here and there, both of the females were blissfully unaware of just what sort of mages they had invited into their home. They had just sat down in the living room when there was a sharp knocking upon the door.

The mother had greeted both the males warmly, if not jokingly. On the other hand the father had arrived armed with a shot gun. "A bit of an overreaction..." Not that Gil was overly concerned by his weapon or presence. He knew how to deal with over protective fathers. Standing up for his seat upon the couch, Gil listened to Kai's introduction. If it was any other parent it might do, but considering this one was overbearing he would require a bit more grace. He pushed past Kai, "Excuse me." He murmured, taking the matter into his own hands, "I am Gillian Nightray." He offered his hand to the Father, who hesitantly took it, and gave the male a firm handshake. It was then that Father realized he had to look up to meet Gil's crimson gaze. Not to mention the mother also finally took in both of the mages appearances,

Kai's irritation did not go unnoticed by Gil. "At least I managed to get him to set down his weapon." The shot gun in question had been left by the door after Gil shook the father's hand, apparently that had managed to ease his mind somewhat. Though the two were not quite out of the woods yet as they sat at the table for the lunch that their two fake girlfriends had prepared. Having been raised to be a King, Gil's manners were second to none, though the food that was prepared couldn't say the same. To most it was probably a decent meal but to Gil it was bland, but he swallowed it down with all the grace that he could muster. It was here as they all ate their meal, the mother kindly chattering with the two girls, that questions began to surface.

These questions were easy to answer. There was only one simple task that the dream mage had to do. It was lie, lie, and lie some more. Lie as much as he felt, because there was nothing to really lose if he did get caught, which most likely would not happen. But that last question was definitely not going to be answered correctly. They will have to try harder than that. I use light manipulation magic. The first lie. Sure, he had light magic, but he had dark magic too. Dream magic, where twilight becomes and actual thing. Legal mage, I assume you are asking? And I personally am from Fairy Tail. He would explain. The conversation would continue until it was eventually time to go. Well, that was a blessing, he wanted out anyways. If he were a wooden puppet, his nose would be so huge by this point.
_____________________________________________________________________________________
Main

Twisting the truth
That was what Gil Vessalius excelled at, whereas Kai lied or only spoke half truths, Gil merely twisted his. That and he was excellent at avoiding the hard to answer questions. "I can summon beasts." That much was true about Gil, his magic was not a dark natured one that required him to lie about it. He made a small snorting sound at Kai's blatant lie about Fairy Tail. His small snort did not go unnoticed by the parents but Gil was quick to make amends for it, "Fairy Tail is quite the rambunctious guild these days, wasn't there talk about a wanted mage in its ranks?" Gil raised a golden brow in question, and it was at this that the father went off, heatedly explaining his dislike for the sudden change in alignment that Fairy Tail had undergone.

"And you? Do you come from Fairy Tail as well?"

The idea was an almost laughable one

"Hardly, I'm the guild master of my own guild."
Gil ran a hand through his blonde mane, his pretend girlfriend that sat next to him seemed to light up as well as the others at the table. A guild master, even of a small guild, was still a guild master. Before they could inquire as to what guild in specific Gil distracted them with well practiced ease, like a politician, "It's a rather small, and foreign so it wouldn't me much to you. I have high hopes for it, I wish to make it a great guild one day, greater than the now darkened Fairy Tail... Honestly, such a murderous guild with only foul intentions, it's quite a shame." Gil sighed, "If only the council or even the capital would do something about it. I hear that Magnolia is quite the large city, the poor citizens must be in such fear. If only I myself had the funding and power, I'd do something about such a thing. Though there has been some talk among the smaller guilds like mine of simply moving elsewhere. Fiore has become such a risky place with these so called legal guilds, they seem more sinister than the supposed dark guilds don't you think?" Twist the truth, evading the truth, Gil was a master at it, and all the while he was getting closer and closer to what he wanted. While, simultaneously poking fun at Kai for having picked such a guild... Still, the parents were impressed by the two, fooled by the mages acting, and Gil's small seeds had been planted.