Deep in rose garden in a very high end restaurant was a certain green haired dragon slayer a few of his guild mates, he had sent out an invatation to his sister to see what she had been up to since he had last saw her. He admited to himself that they had departed on less then pleasant terms but Sol knew that with her being in Infinity Hydra it gave him a unknowing mole in that guild that he could exploit for his own guilds dark purposes.”I do wonder if she will take the invite if not then I’ll have to take some food back to mistress Famine” he mumbled as he took a sip of his whiskey and ate the appatizer he had ordered as he waited. 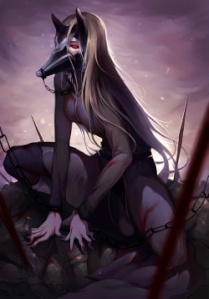 A black envelope sealed with a Basilisk Fang guild mark was sent to her door. The past months she had been working as a bartender at the guild to make some extra cash. Now she lived with a rich single father with his six year old daughter in a huge estate in the village. She was hired as a nanny to keep his daughter safe and sooner or later became a close family friend. It had been a while since she had seen the likes of her older brother. The long lived hatred towards that man. How many lives has he taken this time?

Well... she wasn't much different killing people for food. She turned out to be a ghowl, a cousin of the ghoul that can eat more human foods. A curse as laid upon her by the opposing rival of Concord and Chrom, Seiri. She wore a dog mask to hide her true intentions only showing her brown hair and her red and black eyes. Walking into the restaurent with Tristan, the person she worked for as a nanny, she found her brother by smell.

"Its been a while...brother" she said. Tristan pulled out a chair allowing her to sit as she took the nice gesture.
Sol

The slayer watched as his sister appeared along with a man he had knowledge of and sat down, he knew it was Leeann from her scent and he took another drink of his alcohol before they spoke to him.”that it has and I still don’t sense any magic from you but should I really be surprised” he said his tone almost joking at the end as the waiters brought some food for both Lee and her friend.”I’m guessing your still working for Ardere in Infinity Hydra?” he asked before his gaze turned to Tristan.

The idea of her boss being a bed warmer really ticked her off. It set off an alarm as she gave a glare setting off heavy magical aura, but Tristan set a hand on her shoulder to calm her down. "Not worth it" he said. They were close and acted a lot like a couple, but weren't.

"Why did you want to meet me here?" she would give a small hiss. Obviously, she didn't favor the fact about his alignment at all. She could sense Concord unsettled by the aura. Underneath the table, Tristan held LeeAnn's hand to keep her under control. "My private life is an open book for you anyways" she replied.
Sol

So saw his sisters glare and felt her aura but it didn’t phase him at all as he suddenly grinned at both of them revealing not human teeth but razor sharp fangs. When he was asked why he wanted to meet them here he shrugged as he took a bite of his food before he answered.”what I cannot have lunch with my little sister  you wound me” he said holding his chest mockingly before he snickered.”you can eat the food you have me word as a slayer that its safe to eat” he added. When she jabbed at him about knowing her personal life Sol yanwed a bit.

She went silent. All she had heard was nothing good at all to her ears. It wounded her even more than someone she was related to did all of this. Corrupted by fate, they both were on different ends of the spectrum. "I think we all know the answer to that, brother" she said. LeeAnn reassured that she knew what things he has done. Tristan ordered wine and LeeAnn taken the hardest liquor they had knowing she was not effected by alcohol as a ghowl.

"What...food is this? I can only eat certain foods" she would say. As he showed her razor sharp fangs, she was not phased seeing worse form other creatures and eating their dead bodies was worse. It was worse being a human. Thats all she could eat was human flesh. Tristan provided that once as it left a mark on his shoulder for that.
Sol

“well all I know is that from your scent your not human I guess that you finally realized that Humanity is a sad joke just like I told ya though there is two in my book that are different” he said remembering his first master and the object of his affections and loyalty Famine.”honestly I’m getting really sick of the council and those meddling fairies they are such a pain in mine and my mistresses Side” he grumbled slightly as he finished his appetizer. The thought of the Thunder dragon in Fairy Tail always left a sour taste in his mouth and he hated it immensely.