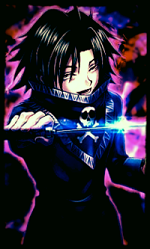 Feitan walked through the quiet town called Clover town and looked around very unimpressed. It was far too quiet, and it seemed way too peaceful for him. He had no desire to stick around in this forsaken hell hole, but he didn’t have much of a choice in the matter being that he was here in order to do a job. Some farmer had the crazy idea to actually make a magically enhanced chicken, or something equally stupid, but if that wasn’t the shining moment of his idiocy then it was the fact that he actually let this thing escape. Feitan didn’t know what this particular man was thinking or why he would bother doing such a thing as this, but that wasn’t really his business. He was to report to said farmer and have him give him the mission officially.

It didn’t take him all that long before he arrived at the location in hand. The farmer was waiting for him, but he was staring at something very far away, at least he appeared to be doing so. The reasoning behind this was because he was shading his eyes with one hand as if that would actually help him see better, but Feitan didn’t care. Instead he was simply annoyed and moved up to the man “Alright. I’m here to hunt your chicken. So where did it run off too?”

The man pointed along the path he was looking down. It was dirt path that led out into the forest and he looked to Feitan “He’s out thatta way. Now you scare him back here, and I can make sure that he won’t get away again. Just scare him into my fence.” Feitan glanced at the man huffing loudly as he shook his head “No, I think not. I shall get your chicken, and I shall not harm him, but the means are mine, and mine alone to consider. If you don’t like that, well that’s a shame. Now then excuse me and I shall return with your damned bird.”

He moved far enough away to not be a threat to anything around him, and it was the perfect spot for him to work this spell. He put his hand over his heart and bowed “All is for my lord.” He suddenly lifts his hand back and inhales deeply letting loose a long loud howl that reaches up into the sky, and he becomes bathed in moonlight. He was left standing as the Wolf Demon King known as Fenrir. With a bit of flexing of his neck, back, and arms he was quick to set all of his bones and muscles into their proper places. Now he had to inhale deeply in order to get his next feat ready. When his stomach, and lungs were as full as they could be with air he lifted his head back and let loose a terrible howl that ripped through the sleepy day of Clover Town. With a terrible cracking sound, he suddenly shot up with such force he trembled and now he was fully ready to go on.

He stood now as a nine-meter-tall wolf man and he was perfectly ready for things to continue on past this point. He wouldn’t allow himself to be slower than a chicken, and he would not allow the stupid fowl to get away, so this form would have to be his best bet. His great 9-meter form had an amazing stride, and it was most likely to get things along without much hindrance. No matter how fast that thing thought it was there was absolutely no way that it could out run something that could take more than five times its stride with half as many steps. His hands were giant, and he was completely capable of catching the chicken within them safely.
This form was powerful, and very dangerous, but he was familiar with its abilities and so he knew that this would be a cake walk. He dropped to all fours and began to rush forward towards the smell of chicken using his great nose. It did not take him long to find the scent of the chicken and he was soon chasing the stupid fowl down, and with his speed it was a very quick pursuit. He cupped both of his mighty paws together and slapped them over the bird holding it down to the ground. In so doing he trapped it inside of his paws and scooped it up holding it in his closed paws moving back to the old man’s farm. This was a simple job, and he couldn’t believe that there was anything like this as an actual job. Still, he moved and set the chicken down in the fence-line making sure it was secure before he looked to the farmer shrinking down to his normal self.