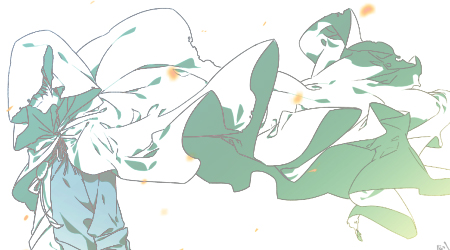 SOME HORIZONS ARE JUST CLOSER, DON'T YOU THINK?
When he did finally plan to become a legally homeless traveler as opposed to whatever he was before, it seemed that everyone thought so too, and what Terith expected to be a quiet and sophisticated office down by the lane had turned out to be a chaotic rush hour with a roller coaster line of people who, to his jest, were pushing their pennies to earn themselves some pretty passports, to escape those types of mundane lives that normal people would have in Fiore.

"I think it's unnecessary, nya...." a lazy voice murmured, the sound purred into the back of his head as he wove through the crowds that bundled up in hoards, "What's the difference between being a legal vagabond and an illegal vagabond? Either way, you're still homeless-nya~"

The warmth that made a nest of his skull stirred a little as he took a step, ruffling his hair as its movements softened. Any kind of formality he prepared himself for was ungracefully thrown out the back door by the static that clung to his head as stray blonde strands curled outwards in indefinite patterns, forcing him to fashion a mop of bed hair with more circumstance over the little spoonfuls of pomp he had in himself.

Terith withdrew the bundle of cat from his head and it screeched in disappointment, showing off a pair of crescent eyes that went against a stale blue stare. "If ever I don't find any leads in Fiore, there might be something else I could learn from in those other places." he whispered, hushed as much as he could so no stares would judge him for his conversation with a cat. The bakaneko wiggled its way out of its master's gentle grip and landed soundlessly on the floor below, though Terith expected more of a bouncing sound and he was somehow disappointed.

Its tailed flicked to and fro as it wobbled on its stubbly little legs, stretching a bit between steps. "I guess I'll help you since you're my master now, nya~" it tilted its head to one side and gave its confused owner an ambiguous smile, seemingly delighted at his unawareness.

"Just don't say I didn't warn you, nya~" it said, a small popping sound catching everyone's attention as the little cat that was sitting on his head a few minutes ago switched places with a large round puffy thing with ears and a tale, easily trumping the height that he sported with grimace.

"Come one, come all, free kitty rides for the little ones!"

The swordsman curved a lip at the magnitude of children drawn so easily to fluffy white thing as if it was born to generate so much static despite having a near composition to that of a rubber ball. Their parents worked in futile to promise them a later when their turn was over, but the bakaneko had charm and it certainly appeared more effective than anything else as little hands tugged at its fur with the determination that could best his own willingness to stand in a long line, just to hold his own passport with pride.

Though he diverted his attention towards the shortening line of parents, his mind was still rattled about by the turn of events that lead him up to this moment. To this day, he establishes Nikuko's presence in his life as a mystery and something he wasn't asking for, clearly, just by looking at how much contradicting that little thing did to him was enough for Terith to believe that it wasn't sent to guard his life at all, but to merely add more spite to the muddled hell he was dealing with right then.

The woman at the front desk clicked her tongue twice before he snapped out of his reverie, her stare was intense despite the glasses. She hands him a paper with a formal exchange of directions and he took to the bidding with a nod, his handwriting flowing over the small boxes awkwardly. The times with his sword being the only thing he's ever held so tightly have spared him nothing in terms of his handwriting, now messy like chicken scrawl, but he didn't dig further into that.

The process flashed on by like lightning as his fingers glossed over the special passport, Torian Pace neatly stapled into the front page, in a mere matter of minutes. He was at the door when he realized that a voice was no longer bothering him. Terith honestly weighed out his options with diligence, considering leaving the yokai an option, but he opted to act with dignity and marched himself into the herd of children.

"Rides over kids, go get your passports."

"AWWWWW!" the kids whined, several of them already being pulled at the arm by their moms and dads.

The two wouldn't look into this situation for the next few days, of course, knowing that there was no blue moon when Terith had to drag his bakaneko out of its shenanigans. It was only until he asked Niku-kun what it asked in return for the rides, and somehow it made him see an entirely different side to its bizarre purpose and personality.

It was a greedy little bastard and it earned itself the nickname Nikuman because of it.