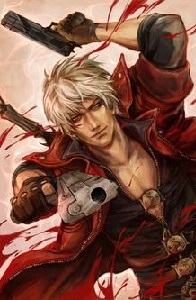 After having taken quite the beating due to his two previous jobs, Vargas decided that it would be wiser to let his body recuperate from the injuries he had sustained than to plunge into another fight, as much fun as it could be. As he liked to say, rest today, have fun tomorrow. That could also be applied to his Fridays... but oh, well. This time, he had picked quite an easy job; easy if you were into dealing with a crying children with a snot falling from his nose because his beloved pet is gone and there was nothing the owner could do about it.

Well, it was not that hard for him, given that he did not care about the situation. It looked like he'd need to make the girl stop crying. While he wouldn't get anything out of the job and he wasn't one to do things for altruism, it may play out nicely, and he'd earn himself some customers for his business. It was much better to receive job requests directly than to look for them in cities, where he had to compete with all the other mages. Yep, the iLac had been a blessing.

Walking towards the appointed house, he knocked to the door, which was opened by a not so young girl, perhaps a twelve or thirteen year old one, which surprised Vargas. He didn't recall children that old having any care for goldfish as pets, but whatever.

-M-Mom said that someone was going to come see me today... I'm sorry, but I don't think I'll be able to talk to you...

-What's wrong, girl? -he asked her, albeit he already knew the answer.

-I...I... I don't know where my goldfish is. His name was Mizu, a rather small, but really lively fish. My father gave it to me when I was five...

Well, well. So it had some feelings attached to it. Oh, well.
-Look, I've never been good at being soft with my words, so let me sugar coat it as much as I can. Sometimes, things you like and love go away.

The girl's face contorted in an expression of sorrow and realization, and the tears began to flow. -"Whohoa, that was quick. Didn't even have to say the word "died"." -he thought.

However, before she'd break out in sobs, Vargas leaned closer and put his index finger on her lips.

-Hey, you didn't let me finish. Look... I know it's hard. I've come from far away, and I don't know how well my family is faring right now. Listen to me. It's these things that make you stronger. You will suffer throughout life, but you can never let rough times take you down. Plus, I bet Mizu wouldn't have liked you sulking around all day, right? -the male asked, to which she nodded and agreed.

-Okay, now that's what I wanted to hear. That also means that my job here is done. Take care, alright? And remember what I told you, because I hate getting all serious and philosophical and won't do it again! -he stated, waving with his left hand as he left. Well, that had been fast. But of course, asking for even pocket money for such a pointless task would not be fitting.