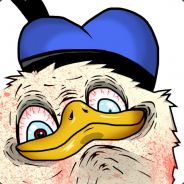 Giant animals seemed to be the theme of the week, ganch thought as he floated along the dirt road in search of the illusive giant chicken. He sure hoped that this thing was less, lethal than the goldfish he'd fought yesterday. or did he.... The amount of fun he'd had fighting that thing was immesurable, and even tough he ended up having his leg half gnawed of, it he still floated away from that place with pride and joy. Finally he was getting back on the right track again, no more kiddy jobs, no more mail delivery, no more vine tasting. Alltough that is what he'd told himself every day up to this one.


But something inside of him, really made him think that this time, was the one. That both other people and himself would start recognizing him as more than just a choreboy. Of course he had to start out lightly with some chicken hunting, but he assured himself that he would be sniping dragons in mere weeks.


He was probably a bit too optimistic, but hey it was atleast better than the day before.
Duckley

He passed around yet another corner as he kept on with his glorious march.... or float. To his dismay there was no chicken to be found there either. It really baffled him how hard it was to find this thing. What with it being a giant chicken and all that. When the giant goldfish showed up people started running immediately and that this wasn't even on land and now he didn't see any commotion at all??? Was there none or was it just in a different part of town??? He accepted the latter as he rocketed up into the sky, to get a better view of any potential chickens running around.

Yet again he didn't see anything.. No giant chickens, no running people, not even any kids needing baby sitting. Maybe it had escaped town?? he thought to himself, if that thing was anywhere above ground in this area, there was no way that he couldn't have seen it at this point. And he wasn't going to go around checking houses...
Duckley

With complete disregard for the last sentence he went completely against his own thoughts as he checked houses... Or house to be more exact. He'd figured that if anyone knew where the chicken would go, it was the farmer himself. The fact that he hadn't checked that place the first was pretty stupid now when he thought about it, any way it was it was probably too late by now. If the chicken had still been on the farm then how could anyone have put out the job listing without it escaping immediately. No, thinking that the chicken was still there was wishful at best but it was still worth a try, since as much as he wanted this job he still didn't want it enough to go cross country searching for a giant chicken he thought right before he lowered himself down to floating at ground level. Almost there...

He had arrived at the farm, and he could immediately see what the farmer had meant by broken chicken house, it was so broken that he would even hesitate to call it a chicken house, or broken for that matter. At what point does something get disasemmbled so badly that you can't even call it broken anymore?? Like at what point can you stop calling that pile of planks and nails a ''broken chicken house'' He kept pondering about lifes most important questions as he waited for someone to respond to his, door knocking.

But no one did... Ganch scratched his head and looked around the farm, maybe he just wasn't home. Farmers have lives outside of their work too right?? Maybe he should just leave the poster as a note so that this guy wouldn't think that someone was still doing his Job. Ganch sighed at the fact that he had to give up so early and slid the job paper in under the door. But halfway trough, he didn't have to push anymore....

Something on the other side had snatched it.
Duckley

Ganch looked up at the door in confusion. What did the farmer not want his help or something??? Had he realised that the chicken was gone and that there was no way to retrive it and just went into all out depression mode. Any way it was, Ganch wasn't going to mess with this giant chicken business anymore, the guy had his note back and the chicken was....... Ganch stopped and looked back at the door as he heard a thunderous, clucking sound coming from inside. ''Uhh hello??'' he asked carefully just to make sure that it wasn't the farmer practicing his chicken impression, if he was then it was hella good, Cause whatever was behind the door let out a loud caw before it busted the door down and trampled Ganch completely. Leaving him on the ground bleeding from where the massive chicken talons had impaled him.

He urked out of pain before he sat himself up, He smiled a big wiiide smile at the escaping chicken, Seems like he would be having dinner tonight after all. With a tailwind start, he sent himself soaring trough the air, at top speeds. He resisted the temptation of verdant orb blasting the bird right back into the farm because of the fact that the chicken had to be returned, Unharmed. Now while his orb spell didn't do any damage itself, being launched ten metres up into the air did. No ganch had another solution. As he kept flying he casted wind bullet, creating a small fast moving green glowing ball of wind. That he launched. Not at the chicken but infront of it, where he went on to make it spin around in circles. The chicken stared widebeaked at the phenomena before going to the logical conclusion that the green shit was edible. With a snap of it's beak it tried to peck the bullet of air, but ganch steered it to the side, and the chicken, hungry for some wind bugs, followed suit. Running at top speed after the small spell.

And after a while of exhasuting mana draining tailgating ganch had finaly steered the chicken back to where it belonged. And when the farmer arrived he was met with the sight of a broken door, and a captured chicken. he didn't know to be thankful or mad, but either way, Ganch walked out of there with a pouch full of jewels
« View previous topic · View next topic »