Demonic Rampage of the Savage Beast 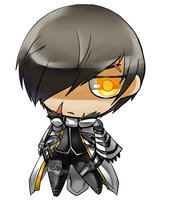 Demonic Rampage of the Savage Beast

Daemon grasped the alley wall next to as his blood began to boil violently as a blood red moon shined brightly in the night sky bath Clover town in a radiant crimson light. Daemon had originally traveled to Clover town to gather his monthly supply of pocky and acquire any new information from the guild master hall; yet unbeknownst to everyone except for the young guild master in question the seal that allowed him to tap into his demonic powers safely was rapidly fading away causing both physical and mental damage to the young mage.

As the last bastions of the seal gave way his demonic blood rapidly rose the surface causing Daemon to exude a cloud of miasma from his mouth causing the ground around him to melt into a congealed slop. Daemon's body under went sever altercations as his already sharpened nails grew to be the length of stilettos ( I mean the knife not the shoe , his eyes changed from yellow to a piercing sapphire while his hair grew long and shifted to a thick sheen of obsidian black the skin over his stomach and lower rib cage peeled away reveling how hollow he physically was as a demon. The only thing that remained of his internal organs in this form was his heart which while visible was still protected by his chest cavity.