A Spring for the Ages! (Servina/Closed)

A Spring for the Ages! (Servina/Closed)

"Even Knights need a night to themselves, and a dress to suit it."
The dark skies of the night had quickly taken their grasp over the top of the town of Hosenka. One would think with how quick it got dark that either they slept through the day, or it simply changed from the blink of an eye. No matter how it happened, the lights set up all around the town had lit up the streets like an amusement park, pushing away the darkness with it's artificial sight. No matter the way it seemed, there was much more fun in the dark than in the light; more secrets, sneaky actions, and so on and so forth. With it, a strange little red head had come about walking through these dark streets. Her lack of care for those whom looked over her appearance had been quite obvious, but she was used to it because of the outfits she CHOSE to wear. A red colored bunny girl outfit, one slightly darker than that of her own hair color, a black hairband with bunny ears protruding and sitting atop her head, moving and picking up sounds like they were real, and a wiggling puff ball of a tail that sat just above her rear end. Normally, these wouldn't really be real, moving things especially when they were attached to clothing and hair accessories as decor. In Sasha's case, she was able to naturally animate these as if they were real, so long as they were on her body. With no exception to the type of animal like things, they could be made to appear as though they were real, and she loved it all the same that way.

There was a purpose that such a person like Sasha had come to Hosenka, much like any other tourist would come for; The Hotsprings. This specific farm girl had heard of these from merchants who ported in and did business with her farm, but really had never had a chance to do anything about it... Until now. Well, it was more of a fun thing than it was business, despite her outfits suggestive motives. Once known to some and very easy to be told to why she would wear something like that of all things, her answer was nothing more than "why not?" And "for fun!". Which even to this day has not changed from the time she started to wear them, and more so to enjoy incorporating them into her magic even so. Now arriving at her destination, the red head would approach the counter, heels clocking along the floor to the place and leaning on the counter, smiling. "One room please~ Gimme a double room, and the next partner come in needing for one can come on in." An unusual request, but her request was taken and noted as well. With a nod and a room key, the Bunny Knight would cruise on into her room and jump onto a bed, back first and sigh happily, enjoying the peace and relaxation before she'd head to the springs.
_____________________________________________________________________________________ 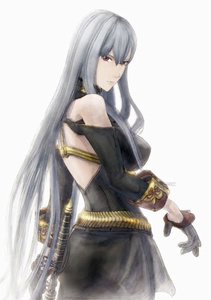 Re: A Spring for the Ages! (Servina/Closed)

Servina had arrived in Hosenka just as the sun set over the horizon. She stood in awe as she witnessed the town come to life, in the matter of a few minutes the entire town was light up with dazzling color full lights. She strolled around town stopping at a few shops to look around then after about an hour she realized she still needed a place to stay. She came across what looked like a meditation temple. There was a sign notifying her that this was an inn of some kind.

She gentle pushed the large doors open as the door creaked open the light flooded out the door way and onto the street. For the first time everyone could clearly see the long black dress she was wearing. She attempted to try to fix the bow between her breasts to make it look centered. She approached the counter and very quietly asked "How much is a room ... just a single one please."

The receptionist struggled to hear what Servina said and paused for a minute thinking about it then answered "Some one is willing to pay for your room if you don't mind rooming with someone."

Servina to her surprise had a chance to spend nothing on her weekend vacation. She thought about it for a minute mulling over the possibility of something terrible happening. "Yes that would be nice." She said a lot louder then how she started the conversation.

"Your room is the last room on the right." The receptionist had respond before Servina had swiftly skipped down the hallway with her little bad flowing in tow. She knocked softly on the door. Not sure what to expect she waited for a response.
« View previous topic · View next topic »