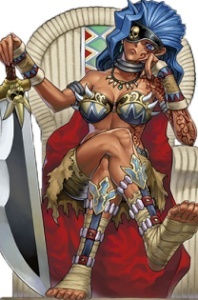 Mission Details:
Job Name: The Mares
Job Rank: D
Job Requirements: 1 D rank mage or higher. 3 Mages Max. 20 Posts, 200 Words. (This job can only be completed once by any character.)
Type of job: Series
Job Location: Any Cursed Land Location
Job Description: A man approached you (And any friends who might've been with you) and told you he had heard of your skills and your renown. He then told you about some very rare animals that he wanted for himself. These animals were Horses that would actually eat the flesh of man. They were prizes that he wanted to have, and did at one time possess, but they had been stolen from him by a viscous barbarian. Now the thief has made off with the Horses into the Cursed Lands. The man is too weak to go in after his pets, but he has no problem paying a hefty sum for anyone who can return his beloved mares to him unharmed. You must find the horses and bring them back to the man. He also warns that if their muzzles aren't kept shut that they will try to attack you, so be sure to keep their mouths closed.
Enemies:
Weak: Groom x3: The grooms are the servants of the barbarian who stole the horses. it is their job to keep the horses healthy, fed, groomed, and ready to be shown off. They are not about to let go of their charges easily, but they are not very well trained soldiers, and certainly don't know how to defend themselves very well. They will most likely come at you with pitch forks, Horse-shoe hammers, or whatever other weapons they might find lying about the stable. They will fall with 1 hit of C rank damage.

Normal: Guard x3: The guards that patrol have spotted you and are now trying to stop you. Unlike the grooms these are actual trained soldiers and they know how to use their weapons. They will attack the weakest mages first, in order to gang up on the stronger mages later. If you fail to beat the three guards in 6 posts they will call for help and 3 more guards will come rushing to the battle. Each guard carries a shield, and an edged weapon of some kind. Each Guard takes 3 hits of C rank damage (6 D rank damage) in order to be stopped, and taken out.

Strong: Mares: Only one mare will put up a fight for each strong monster rolled (there are three Mares in total). The mares don't like people, well correction they love people as dinner. They will try to bite, kick, and eat you. It's teeth are amazingly sharp and will take chunks of flesh right off of someone if they are able to sink them into someone. Of course the key to this mission is in bringing these mares to your client unharmed. So to subdue them you need to some how stop their movement, and keep their mouths shut tight. (How you do this is up to you. Once you have their mouths closed and tied they will stop fighting until the next time a strong monster is rolled. Do not let them take any damage)

Boss: Barbarian: This is the thief of the mares. He has heard you are trying to make off with his prize and he has a few things to say about that. He uses Blast Magic to attack you. His offensive abilities are Blast Punch, and Blast Wave. Blast punch is as it's name sounds. He forms a fist and thrusts it at his opponent forcing an intangible blast of magic to fly towards said target slamming against them for C rank damage. He will use this ability every other post. Blast Wave is where he slams both of his fists into the ground sending a shock wave of magic through the air in a 25 meter radius. His only defensive move will happen when he drops to 50% health. It is called Blast Pulse. The Barbarian stands there and uses his magical aura as a weapon creating a quick pulse to block any attack magical or physical that is D Rank. If it happens to be C rank it will only do D rank damage and anything higher will still get to him regardless. It takes 15 D rank hits to beat the Barbarian.

Reward: 5K jewels (Or nothing if a single mare is harmed), and Access to the C rank job "The Cattle"

Zhu moved slowly through the cursed lands with her blade at the ready she wasn’t foolish enough to think that she could actually walk through the cursed lands without a care. She would have to be careful, and she wondered not for the first time why she had agreed to this insanity. Really however, she had no choice in the matter. The man had sought her out, had almost hunted her for her ability, and the renown she had. He told her of his plight about his precious horrific horses that were stolen from him, and he wanted them back. He was willing to pay for her to retrieve the horses, and this had been enough. Zhu was without a home any longer, she was guildless without a home and without protection. She couldn’t pass up the opportunity to gain more money that would keep her with a home. So she had taken the job and here she was traveling through the cursed lands without such a simple thought. The Lycan woods of the Cursed Lands and it was horrible to see such things of this land. She didn’t want to be here, but true enough she was going to get to her destination and get this job done. The job in question was not one that was all that hard to accomplish in and of itself, but it would take some skill.

She had been given a very specific set of directions of where this barbarian and other such were hiding out. This information would be quite useful in her endeavor, and she was grateful that her employer seemed to know where she needed to go. It did ring a bit strange to her, but she was not about to look a gift horse in the mouth by any means whatsoever. She moved through the forest the best she could follow the trail that she had been given in a rather crudely drawn map, but despite the crudeness of the map in question it was fairly accurate, and she was able to follow it with ease. The overall trip took her several hours to finish and get done, but she soon came upon some kind of actual base. It was some kind of mansion, or building that served to house people, and a barn with a stable. She stayed in the tree line in order to keep herself hidden as she scoped out the defenses that she would have to get over in order to retrieve the horses that she was here hunting. To her surprise there was only a few guards wandering around the barn, but she could also see something akin to servants she suspected these might be the grooms that were meant to take care of the horses. They would be no real threat to her, and she moved around through the trees trying to get around behind the barn she would’ve liked this job to go off without a hitch, but there was really no way of knowing what was going to happen.

Re: The Mares (Private Mission)

Zhu decided that since there wasn’t anyone who was worth any actual Voin points she didn’t need to waste her time on them and as such she went with the stealth approach. It was just no use in order to draw her family blade and stain it with the blood of those who weren’t worth any points. She moved around to the front of the barn and moved towards one of the guards from behind. As he turned to face her however, she grabbed his head and slammed it into the barn wall with all the force she could muster. This cracked the wooden wall of the barn, and it also alerted the other guard to her presence. This guard was able to give out a small startled cry, but was quickly silenced as he met the same fate as his partner. It was with great force that he was also smashed into the barn and put into a deep form of unconsciousness.

With these two guards taken down Zhu nodded her head and walked into the barn. Inside of the barn were half a dozen horses and they were all wearing a very strange muzzle right now, but Zhu knew from her employer that these horses were flesh eating and so she could understand the desire for these thieves to keep them from sinking their teeth into them. It would be a terrible thing if one of these servants was too careless and was snapped up by the mares only to be ruthlessly and brutally devoured. Still, she moved through the stables and made sure that everything was in its proper order and indeed they were. The mares were well taken care of, well fed it seems, at least if the smell was any indication. Not to mention the fact that there was the stench of old blood, and perhaps rot. In any event it was not like there was fresh blood meaning that no bodies had been butchered for today, and as such these mares were likely to be hungry.

That would not due simply because it would be a rather annoying state of affairs being that Zhu still had to drag these damned monster mares through the Lycan Woods in order to get them back to her employer. It would not do, it would not do in the least, but there was nothing that could be done about it in the slightest. She would not feed living people to the mares, and there would be no course to go about and do anything that would end the life of such things as these useless guards. She was about to enter into one of the stalls where the first mare was, but that was right when one of the so called page’s decided to interfere with such an act. Truly it was unfortunate for every party involved being that this man would likely alert the rest of the damned savages. He was about to make a sound and a movement that would be towards the door. It was not going to end well for this man sorrowfully indeed.