To Earthland... And Beyond! [Job/Solo]

To Earthland... And Beyond! [Job/Solo]

Serena cracked her neck as she read the terms of getting a passport, just in case she needed to get the heck out of the country. She thought to herself what a useful way to put it, she just has to declare herself as an independent mage and she could get herself a passport to any other country in the world. She put the ad away and started her way towards Rose Garden, she thought that Hargeon she would stand out way more. On her back she carried nothing but the clothes she is usually seen it.

Once arriving in the town of Rose Garden, she noticed that it was a rather particular bright day that she would need to grab a pair of sunglasses if she were going to go through the lines to get a passport. Before arriving to the lines she grabbed a pair without paying from a busy street vendor. He hadn't noticed and particularly Serena didn't care if she was caught, all that would happen after that would be she would threaten him and leave anyways.

Heck even if she had threatened him the only draw backs would be she would just have to go to Hargeon to get a passport instead of the Rose Garden. Serena slipped the shades on over her face and relaxed a little bit knowing that her eyes wouldn't be burning for the rest of the day. She made her way towards the large line leading to the facility that would basically hand out a passport to anyone and their mother. It was a good thing that she were a patient woman, or else this line itself would kill her and cause her to lose her temper as she has seen some people already run off in a tantrum from the line.

She stood there silently as the line slowly got shorter and shorter. She was actually starting to fall asleep that the line was that long and slow. She didn't know if waiting for the dang passports were more tiring versus her entire trip to Rose Garden. The line itself stretched for at least a mile, not including the fact that it looped back around to the beginning to where it started. She chucked to herself and started whistling a soft tune to herself as she waited, it wasn't much but it would keep her entertained for at least another 20 minutes. Heck it might also annoy people out of the line if she were lucky enough.

After an hour of waiting she had finally reached the front of the line and waited a good fifteen minutes to see someone. They apparently didn't even care if anyone got a passport, by the looks of their clothing they were loaded with cash. Serena paid no mind to that however as she just quickly ordered a new passport and filled out a few forms of paperwork, where she waited another ten or so minutes until she was finally handed her ticket out of this country and into another one.
Ninetails Derpfox 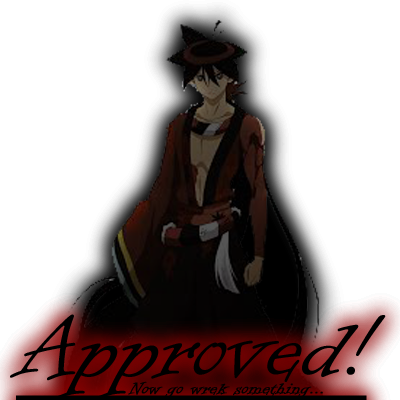