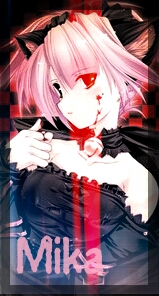 It was a warm summer evening. There was a light breeze blowing the trees slightly in the wind. Honestly it was a night you just want to lay on the grass, relax, and go to sleep. Yet, there was one wizard who wasn't doing that. She was on a quite important quest right now, nearly arriving to her destination.

Apparently, there had been a new dungeon that had mysteriously shown up near these old ancient ruins. It was far off the beaten path which made wizards have to walk a fair distance to get to the location. But, that walk was almost over for Aura as she crested a hill, overlooking some ruined buildings and a dilapidated entrance to the mountain. That seemed to the entrance she was looking for. Moss covered the area and it look like it had existed there for hundreds of years. Yet...the magic was nearly palpable in the area, like the place had just appeared out of thin air...
Aura

Player Requirements: Job can only be performed once, ever. Must contact Mika Zonde for permission to do quest. Can bring in 2 wizard max. At least 1 D rank to attempt. No per post limit, no minium posts, at least 2500 words. Must roll 5 times. Boss appears after all other enemies are defeated or snuck past. Rolling boss during the 5 rolls means 2 strongs.

Job Requirements: Make it through the dungeon, defeat or sneak by the enemies and boss, take the necklace and leave.

Job Description: One day while in some town, a man ran past you at incredible speeds. Looking towards him to see what happened you realize you have a letter in your hand. Being compelled to open it, you do so. The letter describes that a new dungeon has appeared over by the mystical ancient ruins. Rumors have it a powerful magic item sits in the end of it. Please clear the dungeon and acquire the item before it falls into someone’s hands who doesn’t deserve it. I will know once you complete this and send additional rewards.

Wandering skeleton x3 :
This skeleton seems to have been resurrected from the nearly tangible magic energy in the air. It is quite weak and only needs 2 D rank damages to drop it. It seems to carry a sword and deal D rank damage back. Warning, they come in groups.

Trap field x5:
You found a section of the cave that is trapped with pits, spear shooters, poison darts, and even a boulder drop. You have to sneak by these without tripping them off. Roll 5 normal die per person. Every die that hits 3 or less does ½ D rank damage to person. If the player is skilled in dodging or disabling traps you may attempt to disable the traps or sneak by.

Fellow Adventurer:
Oh someone else found this dungeon as well. There seems to be a man moving through the dungeon, armed to the teeth in plate mail armor, and a sword. He hasn’t noticed you, so you may be able to sneak around. If he notices you, he will charge you with a broadsword that deals C rank damage. He take 9 D rank hits to go down. Though, since he is human head attacks deal extra damage, and can even one shot him.

Daemon:
What is that? It is a tall demonic looking being. It rests at an easy 7 foot tall. It is standing right in front of the altar where a necklace sits, looking down at it. It seems like you are going to have to kill this beast. Its thick demonic skin makes it take 15 D rank hits to go down. It deals 1.5C rank damage by ripping into you with its claws. Headshots do not affect this thing, but get creative. Severing limbs always works.

Reward: D Rank EXP 1000 jewels. And a mystical necklace that is blood red and has a magical dark red aura around it. What could this be?
Necklace: https://www.fairytail-rp.com/t20618-necklace-of-bloodlock#234503

Why anyone in their right mind tried to venture into a newly-appeared dungeon in the middle of long forlorn set of crumbling ruins was beyond her, and yet Ageha now stood before the moss-covered entrance, intently staring at the darkness stretching far beyond the crevice. While the local vegetation seemed about the same age as the ruins surrounding it, the magic resonating from within did not. It was vivid, wild, and most of all, new. Not as worn-off and decaying as the rest of the magic resonating throughout these ancient remnants, yet it did feel far more menacing than anything she'd ever felt. As if it wasn't meant to be within the vicinity of these ancient ruins... Not meant to be in this world altogether. She shook her head and focused back to the task at hand; moving through the dungeon as quickly as possible, get whatever piece of jewellery there was at the end and high tail it out of here.

If it hadn't been for that weird man clamping to her and begging her to go to the Ancient Ruins, she wouldn't have come here in the first place. But the man, however crazy and mad he might've seemed, had plead for help before running off. And no matter how little his request meant, it now was her duty to find out what exactly had given the man such a fright. The letter he'd tucked into her hands as he ran past had been overwhelming, probably due to the man almost toppling her over when doing so. Although she'd first thought of ripping the letter apart, curiosity had won and she'd opened it to read. Once the content became clear to her she'd immediately tailed the man, asking him to explain the request in detail. If it weren't for her horrible sense of direction, she wouldn't have bothered pursuing the man, but since Ageha had no idea where to find these Ancient Ruins, she had had no other choice but to do so anyway. And thus the steel mage now found herself pondering before the cave's crevice, still unsure about whether it really was such a good idea after all. The magic inside this dungeon send shivers down her spine... yet, her thirst for adventure seemed stronger still. Without lighting a torch, Ageha ventured inside, leaving the world of light and living behind her.

Upon entering the dungeon, there would be light seeming coming from the walls. Though, upon closer inspection it seemed to be luminescent moss that grew from the magic that hanged in the air. The walls were bricked up, but cracked lightly, like a good ol' dungeon. Bones were scattered here and there but nothing really seemed out of the ordinary. Well, unless you count for the fact that place appeared out of nowhere.

There seemed to be only one wide path, no way to get really lost and so far...it seemed really easy. What possibly could be waiting in the depths forward? In front of her would be a staircase, and it is quite long, leading down towards the core of the planet. What comes after this point of no return?
Aura

The cave stretched far before her and, much to Ageha's surprise, was far wider and higher than the crevice had suggested. A mere jest perhaps, but the young woman was quite certain this cave was made by human hands. Not that the term 'cave' was in order for this seemingly endless hallway of stone. Although minimal, she could feel with every step that the path she followed slanted, and most-likely would lead her further down to an underground maze. As soon as the last rays of natural sunlight faded, the cave lit up again, by a gathered oddity of luminescent fungi and mosses. They had the chance to grow luxuriant and free, having taken refuge in whatever other crack the ceiling had to offer and thus becoming a guiding light upon her journey.

Time passed by slowly, with no other noise than the echoing of her footsteps, the dripping of a scarce water drop finding its way down a naturally-formed stalactite. It was odd to see that these things still managed to form themselves within what she thought to be a by man made hallway. So odd even that it made they young Rune Knight wonder whether said thought was actually true or not. After all, it was not her intention of finding out what mysteries this one-sided rather boring hallway had to offer. What laid at the end of this tunnel, that was what she needed to find out, and if she had to believe what the man had told her, protect at all costs. The monotonous dripping and stepping was interrupted after walking for half an hour more; all of the sudden before disappearing again, a noise had echoed. Not from behind her, but from somewhere before her. Intrigued yet anxious, the Divine Steel mage gently made her way towards the noise, careful to make as little noise as possible.
_____________________________________________________________________________________

As the wizard approached the noise, there would be a step down into a rather wide room, it was deathly dark, and she was unable to see towards the middle of it. Further on she could see the light of the passageway on. Treading lightly forward would reveal something rather...gruesome. If the mage travelled forward, she would see a small horde of skeletons. Just a few rather standard boney abominations. They all wielded swords, unidentifiable to their type.

That wasn't the gruesome part, it was what they were doing that was rather horrific. They had seemed to have cornered and unfortunate soul and well. I'll spare some of the details but, the human wasn't alive anymore, and the body was hard to make it from all the ripping and tearings from the beasts. They haven't noticed her.
« View previous topic · View next topic »