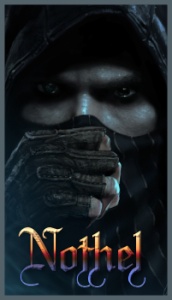 Nothel walks down the streets of Clover Town, a highly annoyed. He just went to a job, but when he got there the person didn't need his help anymore. He just went all the way from the guild hall to here for no reason. Shaking his head, he continues down the street towards the nearest train station to leave...until well..something happens. He was wearing his normal cloak and armor underneath, sword at his side. His face was particuarlly mean today, prone to lashing out at anyone except one specific person. But she wasn't going to see him today. Groaning he stops walking, looking around the town.

Hibiscussting wasn’t entirely sure what she was doing. She’d seen other guild members do this and the pattern that seemed to be reoccurring was that they gave these rectangular leaves to people who smelled of magic. The she-cat was new to her guild, and while she had no idea what they were doing or why they were doing it for, she wanted to be helpful. This was her new start and she wanted to make a good impression on the guild. Even if being around all these gigantic humans was a little bit scary. She had to be useful and hand out these weird leaf things.

So when Nothel passed by she picked up one of the pamphlets and rushed over to him, pawing at his leg for his attention. “Hello there.” She meowed in cat tongue, completely incomprehensible to him. “Would you like this leaf today?”

Nothel was having a....bad day, until well, this happened. A cat, out of nowhere, ran up to him, mewing. At first he looks down at it, angry, it visible on his face. Suddenly, his annoyance would disappear as he kneels down beside the cat, taking the pamphlet, "What is this, kitty?" he smiles, reading it. It was something about joining Blue Pegasus....Nothel was already in a guild, but he has to admit that the cat was trying really hard to well, help. "Blue Pegasus...are you promoting them? Aww...that is cute.." he grins, patting the kitty on the head lightly.

“Soooo… Do you eat it or something?” She hadn’t seen anyone eat it yet, but from what she had seen these humans could eat both meat and plants. So could she technically, having had a medicine cat once upon a time. But those herbs were only for medicinal purposes. Meat was far more preferred and actually sustaining. She sighed a little. “What am I kidding? You can’t understand me.”

Nothel grins, watching the cat walk back. Frowning lightly as it goes to get more pamphlets. It was literally getting the papers and handing them out. That was quite amazing, like it knew what was being said and such. That was pretty interesting to Nothel... Looking around himself, he wonders if he should help the cat. He ponders this for a while, before walking towards the stack, "Here, " he muses towards the animal, "I'll help you." He takes some pamphlets looking them over. At first it make look like he is stealing them, but he isn't. He soon starts to hand them out to various people he sees that emit a magical aura.

Honestly him stealing the pamphlets wasn’t Hibi’s natural assumption. She had little concept of ownership beyond land, food, and perhaps the vegetation that grew on it. she had thought for a moment that Nothel was going to take all of the pamphlets, but in Hibi’s mind that was of little consequence. Her new clan was giving them out, so clearly they couldn’t be that valuable. At this point the she-cat was pretty sure they weren’t edible. She’d tried. It hadn’t really worked.

Even if she was a creature that could easily eat leaves she doubted they would be edible. No one was eating them. The job of handing out the leaves was becoming a lot quicker now that he was helping. Which was good she supposed, though she wasn’t sure this was a question of speed.