That is rude to ask!

Midnight is a large, well-built young man with a slightly tan skin tone, green-blue eyes, and short brown hair, he also has a silver arcane tattoo tracing down both his forearms that are typically covered by his robes that are long sleeved. His guild tattoo can be seen on the back of his neck, just below the hair line and is a solid midnight blue.

He is often seen wearing blue robes that have white trimmings with a comfortable white undershirt, white loose trousers tied at the ankles by white bandages and black closed-toed sandals with various clothing amenities from time to time. He is also seen carrying a staff that he uses to walking and fighting. 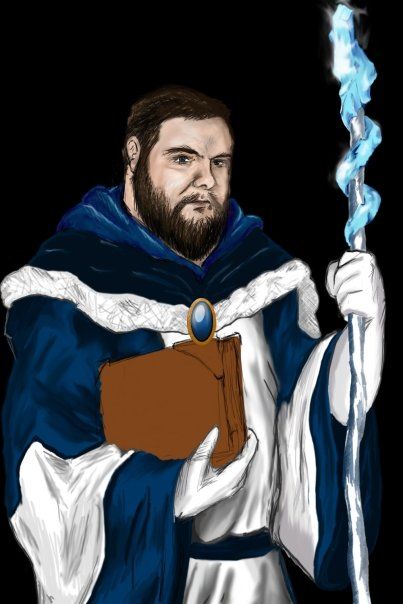 "Life is like a river. I ride the current of life and swim when I need to."

A motto Midnight frequently says; a motto he lives by. Jolly, kind, protective, truthful and a daydreamer are all words one could use to describe Midnight. This is who is he now but he always wasn't like this.

In his younger years, Midnight was known as "The Unknown”. He never really talked about who he was, who his family was or what he could do for that matter. Being somewhat of an idealist, an adventurer and a risk taker he was always wanting to push himself to the extreme when he could. He was raised in family of wizards and was kept in the basement where he was toyed with by his older brothers for not having magic. He did the best he could to keep himself entertained with the space and living conditions he was provided. Because of this he tends to shrug things off with ease and keeps going without a care in the world. In his teens he made new friends and he learned to protect his comrades, rather ruffians. His hole life and friends had shaped him into quite the demon, not caring for rules and regulations he didn’t agree with. Doing what he pleased and pushing his body and mind to the furthest limits he could at times while still maintaining a sense of humanity.

It wasn't until Midnight learned magic in his lower twenties that his life, personality and lifestyle changed. Now, he is a loving and caring person who treats his friends, and even strangers, with kindness. He has rarely been shown to be in a bad mood, and can tolerate all but of the most annoying of people, often disregarding what people say. This has also lead him to be someone who is hard to upset or unnerve. However, regardless of how kind and level headed he is, Midnight never accepts people insulting or harming his friends or those he loves and throughout his life has always stayed an idealist, an adventurer and a risk taker.

When in battle alone he uses his strength, great stamina and reserves to better those he is fighting. Studying bojutsu to it's limits he mixed close ranged fighting with his staff with what few close to mid ranged offensive spells he has. He had to learn to develop his body and fighting skills to compete due to the fact his magic is generally supportive and has very few offensives spells. His naturally strong and durable physical body grants Midnight a natural ability to ignore most pain inflicted against him and provides him a great amount of strength to push himself to his furthest limits, even if he is severely injured. About the only downside to Midnight is he will start to pull punches if he feels the one he is fighting can't survive. He doesn't wish to kill, it is something he greatly dislikes and can hamper him in combat at times. Only when his friends, guild and loved ones are in direct threat or danger will he toss this and fight to his fullest ability, never pulling punches.

When fighting in a group he tends to keep to the back, aiding the ones with more aggressive magic than his own, almost always playing the support role and only engaging when he has too. IF there are those weaker or long ranged compared to him he will stay in the middle, acting as a shield. As such when in a team sometimes one has to be a leader. Rarely liking to take up the role of leadership, Midnight focuses on the safety of the team before the mission. His goal to both complete the mission and bring back everyone safe and sound to the best of his ability. However, he will sacrifice the mission for the safety of the team.

Because of his size and strength he is self-confident. However, he never lets this confidence grow past a certain point due to his self awareness. He knows in combat that there is always someone better or someone with a magic that works well against their own. In the end, Midnight uses his durable body, strength and martial skill to the best of his ability in all situations. No matter if it's one vs one or as a team he keeps his composure, trying never letting his emotions run rampant so he can always have a clear head and use the knowledge he has gained through observation and what he can remember from the magical tomes he has read.

Growth- Although he is a late starter in the world of wizards he enjoys anything that can help him grow such as quests, jobs, fighting and training. If he can't be doing any of those he has his head buried in some tome of magic.
Reading- He has a fondess for ancient tomes, books on magic and lore. Often taking jobs that offer a rare book over jewels.
Honesty- Normally the way to a man's heart is through his stomach but with Midnight it's honesty. Often showing mercy and greater kindness to those that are.

Killing- Even though he is a wizard, he doesn't like killing.
Dark guilds- For obvious reasons. They tend to lie and kill.
Lying- He dislikes lies, Plain and simple.
*Motivations*

Strength- To become the great wizard ever known with his particular type of magic.
Growth- To grow to a skill so that he can always be of use to his guild and loved ones. Always reliable when in need of protection.
Love- His greatest motivation...to be loved by both magic and those he loves.

Lost Lore- A growing fear of Midnights is the loss of rare books. Books that hold old magic, history and more. This has lead him to become a seeker of books to place under his protection.
Death- He fears the death of the friend or loved one. He does not want to see anyone die on his watch.
Magic- He doesn't fear magic but he fears losing it or having it sealed in some manner. It has made him who he is today and doesn't want to lose it. Those who have the ability to restrict magic are the ones he fears the most.

Ages ago a demon visited Fiore and corrupted the spirits of a selected few. These elite dark mages gained the ability to seal magic. The gift was passed down over the generations and grew weaker. Some heirs of this lineage still have the ability to seal a spell for a limited amount of time.
Usage: Can only be used once per thread. It can prevent a spell from being activated and the spell is sealed for 4 posts

As a White Mage, the magic infused in all the world around them natural absorbs into him, always filling the user with this life energy. Because of this he has
greatly enhanced magical reserves and recovery rate.

Name: Cure
Rank: D
Type: Support-Healing
Description: Raising a hand forward within several meters of someone or placing their hand on someone, the hand begins to glow a soft blueish-white aura as the body's wounds are healed.
Strengths: Heals up to D rank wounds.
Weaknesses: Short range. 1 post cool down.

Name: Antidote
Rank: D
Type: Support-Healing
Description: Raising a hand forward the White Mage places their hand on someone as the hand begins to glow a soft greenish-white aura. The body's poisons are healed as the poison is removed.
Strengths: Heals up to D rank poisons.
Weaknesses: Short range. 1 post cooldown.

Name: Libra
Rank: D
Type: Support-Tracking
Description: The caster simple concentrates for a moment and can feel the life source of anything living within 60' and how strong of a life force they have. This is great for knowing who needs healing the most, even if the White Mage can't see them.
Strengths: Great for locating people and creatures
Weaknesses: Lasts 3 posts. 6 post cooldown.

Name: Dia
Rank: D
Type: Offensive-Buff
Description: The caster simple concentrates for a moment and touches a weapon. The weapon gains a faint swirling blueish-white aura to it. When the weapon strikes anything it gains some magical force behind it.
Strengths: Adds D rank harm effect to a weapon.
Weaknesses: Lasts 3 posts. Only works on weapons or something considered a weapon(example a dragons claws). Requires touch. 6 post cooldown.