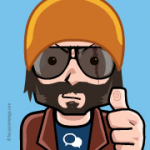 Small particles of sand travels in the sky, slowly gathering on top of one of the roofs in Hargeon Town. Sand slowly gathers together and shape shift into a body, adjusting its details and solidifying what we now see as Kondo standing on the rooftop. Kondo checks his body, checking if he forgotten any part of his body that didn’t make it all the way from his desert home to Hargeon Town. Looking around, Kondo sees the blue sky and inhale the fresh air of the city, “nothing like fresh air near the ocean.” Kondo hears and senses a huge abundance of movement down below on the streets. He looked over the ledge and notices a crowd of people who seems looks to be excited. He noticed some well dressed officials addressing the people to stand in line and to be patient. Kondo thought to himself, “this must be it, Old woman Nora gotten a message about some passport and told me to go retrieve it.” With one foot on the ledge, Kondo smiles and thought about just stealing the passports for the Old woman back home. Unfortunately those thieving days are long over and he have to decide to either to be a model citizen and wait in line like everyone else or send a message to the old woman back home on how dire the situation is. “The Old woman won’t allow any failures...” Kondo sighed from the thought of disappointing the Old woman and sat down on the roof top. Pondering what he could do, he seriously hates lines and hates having to deal with a lot of people.

After a while, Kondo realized it has been about an hour or so of thinking on the situation on rather to do good or be mischievous. Being a guildless mage was hard for him, because he never really had anyone to follow instructions from until Old woman Nora.

Suddenly he hears a female scream down below in the ally. Transformed his body into sand and reshaped back into his solid form after he guided his sand like body down below. He found the woman down on the ground scared as though she seen or demon, “hm maybe she thinks I am some sort of demon...heh she won’t be far from the truth,” Kondo thought to himself, “might as well clear the air before she screams bloody murder.” Kondo bows and introduces himself, “Hello ma’am, my name is Kondo and I am a Sand Mage,” he speaks with excellent care and modesty, “I heard a young woman screamed and I was wondering if that may have been you?”

The woman looked calm compared to what she looked like a few minutes ago. Then she explains hurriedly, “I was robbed! My passport!” The woman explained in short sentences, “I waited so long to get the passport and now it’s stolen from me.” Kondo listens to the sad woman’s tale on how long she had to wait in line to finally see the love of her life on the other side of the border. She looked at Kondo and plead, “please help me! I need that passport, or else I won’t be able to get a chance like this again.” the woman continues to plead onto Kondo for his help, and just like that. Kondo agrees to retrieve the passport which was lost from her.

After a moment of pleading, Kondo agreed, and gotten a descriptions of the man who stole her passport. Kondo sensing any strange pattern on running through his sonar ability, looked for behavior similar to a thief’s movement. Kondo focuses and as time passes he found one unusual foot pattern and the person stopped not too far from here. “So ma’am, it seems like I found our thief and I will be on my way to retrieve your passport. I will return to this location within the next 2 hours with your passport.” And he was off and ready left the woman..
Kondo traveled in his sand form and arrived at the location where he believes the thief to be located. Just his luck, it is a beach house near the ocean. Kondo admires the beach and the cool breeze from the ocean. He look around and found a shack a few pace away from where he landed on the beach.

The shack was made out of wood and is not well maintained for a sea shack, but not maintained enough to be a lifeguard shack. Luckily there are windows Kondo can peek through the stained glass to see if the man or woman he sensed was the similar to the man the woman described Kondo as the thief. Luckily he was correct, the man was described as someone who was around this late thirties and had a scar on his right cheek. The main entrance to the shack was elevated, similar to a western bar door. The interior the shack seems as though a place you would stop by to sleep. There is one bed, a dresser, and a tiny barbecue pit. The man seems to be distracted on cooking his meal, “Oh this might be the last time he will have to see this shack...”

Kondo felt this was a job for his clone magic, he called upon the sand on the beach to form another body and soldify as another body of sand. Appearance wise, this sand man wears a sungalsses with a big mustache. The sandman’s fashion sense is similar to a tour tourist guide who lost his crowd and might lose his job. Kondo thought to himself, “I am going to name you...Jacob Sanchez,” Kondo named his body double as a part of who he is.

Jacob woke up from his birth and moved as if he already knew his mission and plans of action if things were to go south. Kondo sat and watched Jacob starts to move towards the western bar door and knocked. Jacob asks, “HELLOOOO...” he had a rough man’s voice, “is anyone home?” Jacob tied to his mission continued to harass the owner of the shack house.

After Jacob mentioned a lady, the man raise a brow and was shaken, “My name is Fox, and I am busy at the moment...” Trying to part ways from Jacob was doing things, Jacob continues to be persistent and kept on asking “Fox” more questions regarding his day. For a while, Jacob finally parted ways from Fox and bid him farewell.

Jacob made walked away from the door after Fox closed it shut, gathered that he has been living alone in the shack after he moved here from a nearby town. “Did you like my little interaction with Fox?” Jacob asks Kondo, “He seems to be the timid type who doesn’t want to get invovle with anyone.”

Kondo sigh and replies, “He has the passport you know?” annoyed that Jacob did nothing to move forward from getting the passport. “I am going to go get it,” Kondo stood up retrieving Jacob back to his body, “thanks Jacob...” Kondo closes his eye and counted to three, “1...2...3” then he opens his eye and ran towards the main entrance keeping his palm open forward and conjuring the sand to follow him. Kondo’s speed increases and dived forward like a swimmer starting his race, a wave of sand travels with Kondo and he infused himself turning himself into sand. The wave came close to the shack and over flood the shack with sand. Fox was surprised by the sudden sea of sand entering his shack, with all the commotion Kondo grabs the sand and Fox and moved outside of the shack. Buried Jacob, but his head in sand, so pass byers will question what he is doing and possibly can break free from the sand. With Kondo’s wind manipulation and still in his sand form he carrying the passport, he made it back to the lady in one piece. The lady looks surprise as huge amount of sand lands near her and mold a body which became Kondo. “Here you go ma’am.” Kondo handed the passport to the lady...unfortunately the lady grown tire on waiting for Kondo and waited in line the second time. She gotten an additional passport and told me I could go to the official to get one for myself...she appreciates what I did, gave Kondo a small kiss on the cheek and left. Kondo sigh and got ahold of the passport just by waiting in line...because dealing with official to change the name on the passport would be too much of a hassle.
« View previous topic · View next topic »