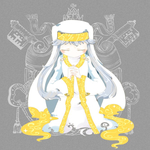 @FairyTail
The day began for her like a simple one before that as the sun dipped over the horizon giving the world a taste of its beauty the sky hung with gold and orange decorations. As she slowly put her clothing on slowly tapping her hands together as she knelt before her bed slowly praying in grace for a solid five minutes before she rose from her position a smile on her face as she sighed with relief as in her mind the day would be most excellent for her. With a slow and happy jaunt in each step she took almost like a child from any other family who had just been given something they had always wanted she skipped through the train station only a small backpack which contained a simple transport lacrima to cut down on space within it apart from a few jewels and even a map of magnolia her goal of travel. Sarah herself had received word from her priests of the pedigree that the guild Fairy Tail had even going so far as to tell her it was where most great mages began. In her mind she finished her checklist from her leave of the hotel in Clover to the station itself a soft smile quickly grew to a wide one as she could not help but feel accomplished in her journey so far, “Ah excuse me mister~” She spoke up quickly to a taller man who within moments knelt down to talk to her, “Yes little miss? How may I help you?” She spoke with grace and kindness in her voice as she giggled, “Can you perhaps tell me where I can get to the train leading to Magnolia?” With a simple smile the man pointed her out and she was on her way. Yet on the inside she could feel something welling and she knew it well as this feeling was not happiness nor accomplishment, no this feeling was something she knew all too well, rage.

Almost like a dial on a clock which were to go crazy from magic that affected time Sarahs own mind was welling with more anger the longer she had to spend around people. For to her she knew one simple fact and that was they were all lambs to the slaughter a simple race of insects her god would smite using her as a vassal. Yet it was because of her age and even lack of power that she learned to hide her truth. Hide who she was to the point she became something else for as disgusted she could be with those around her she also knew it would be a fool's errand to try anything at her level. So with great temperance and biting of her tongue Sarah would act and lie to be who she is not until eventually the curtain fell and behind it was not only the truth of her self but also the end of all her god despised. With a simple brush of her fingers through her hair she handed her ticket to one of the trains employees and she was off to Magnolia.

With the train ending its travel in magnolia the sun could be seen high above them the heat would have been great had there not been a gentle and graceful breeze. Looking at her map she plotted her course and made her way to the Fairy Tail guild her clothing caught in the breeze slowly swaying behind her as the golden ends would occasionally catch the sun shining on the buildings around her. As she reached the doors of her goal a soft and deep breath was held as she calmed her mind and slowly walking in he hands together as the sleeves covered them and her head hung low hiding her face till the doors closed behind her and she raised her head slightly speaking in a soft and almost weak voice, “H-Hello? M-My name is Sarah McCloud. . . And I would like to join Fairy Tail.” With that she waited to see who would greet her and even if the guildmaster himself would show.
Let the grace of light purify you.
► kaigra ◄
Haru-senpai

Heero walked into the Guild and as it was busy as usual, people greeted him as he returned. Rose was at his side, walking and reading a magazine about the Magic Council elections. Slapping the paper with a paw in irritation.

"People don't vote I swear!" swishing her tail, as she kept up with politics, she walked back into the lively Guild, that was filled with magic and wonder. Regular humans mingled in with wizards as people conversed all over the place.

Heero walked just past Sarah, as he heard her. As he turned and made eye contact with her, she looked afraid, or perhaps not afraid just having been through a lot. He looked around and assessed the situation, having just returned to the Guild, he would look at Sarah; as the noise, laughter, magic, stopped the moment he spoke.

"Silence." as everyone looked toward him, food, drinks, and games in hand. He would turn towards Sarah. Hundreds of people looked at her, as he knelt and looked at her. "Hm. You're from the Church then...." Heero would smile at her as he knelt. "It's been awhile since this place has been blessed....between you and I, two angels who are Earthbound joined this Guild recently. If you wouldn't mind saying a prayer or two us...in your spare time of course?" he would stand and smile at her. People around the crowd looked shocked, as Heero stood up, nodding to the crowd that they could resume their normal goings, as noise and laughter filled the air again.

"So, you say you wanted to join?" Rose said without looking at Sarah. "Follow me..." Rose walked with her toward the grand stairs the only stairwell down on the first floor of the Guild. As they entered the hallway, it was quiet. Heero followed the red Exceed and Sarah down to the Library. "Well...if you ever want to get away from all the noise, you can come here." she swished her tail and blushed as she performed this nice gesture, thinking Sarah to be adorable.

A gigantic green portal spun in between some of the shelves. The way to Tenroujima Island. Only Fairy Tail wizards could pass through the portal. A few wizards, girls and boys sat quietly reading in the library.

"So......if you'd like to join...there's the matter of your Guild Crest. You're dressed from head to toe, so....I'll just let Rose do it." Heero got a sweatdrop over his head as he blushed and handed Rose a black box. Inside was a Fairy Tail stamp, the tattoo would be permanent, and the ink would only accept wizards who were destined to be members of the Guild.

Heero would turn his back, blushing as Rose would put Sarah's guildmark where she asked, one way or another. She was a cat and didn't mind climbing into peoples clothes. Eventually, the light would sizzle, and the emblem of Fairy Tail would stay upon Sarah, signaling that she was a true member of the Guild.

"All done." Rose would say as she closed the stamp box. With a sigh Heero turned around and raised his eyebrows. Smiling at Sarah. As he thought that he should renew his own faith. He knew higher powers existed, as a well traveled wizard he'd met a few to say the least across dimensions.