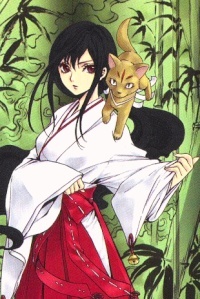 Fairy Tail. It was time.

The early sun bathed the whole town of Magnolia in its warm light as morning arrived. Saya stood in front of the large building that was the guild of Fairy Tail. She was amazed by its appearance and momentarily hypnotized by the guild's flag bearing that famous emblem. The time had come to become a recognized mage and she was excited, yet anxious at what awaited her behind those front doors.

Fairy Tail had always been the go-to guild for many mages, there was no real requirement to join aside from having a heart and believing in one another. This guild was admired by many, even despite their more destructive nature and incidents with the Magic Council. She held a great interest in them since childhood and now grown up, she would like to follow in their footsteps and learn their ways. This place as an eternal mystery... A never ending adventure that she wanted to experience herself.

The young woman placed her hand on the wooden door, and gently pushed it open.
Haru-senpai

Re: Humble beginning [Saya's Introduction, Open to all]

On this morning, apparently. Heero decided to come to the Guild early for a change. It seemed like everyone was still at their homes in Magnolia, or wherever they lived when not at work as wizards of Fairy Tail.

Normally, the great hall would be packed with people, but it was 6AM, and torches burning on the walls, the great stage, and bar empty was all that could be seen. Except for one man and his cat.

A Red Exceed, wearing a white and blue dress sat half sleep over a half eaten bagel donut, with a stack of paperwork in front of her. A blue haired young man in Slayer like attire with a purple scarf was shown staring out of a window, a cup of hot coffee ignored.

"I wonder how far away Acnologia is from here....now." he mused to himself as he continued to stare out of the window.

"You could help me with this you know........" without bothering to say anything back, that was all the response Rose needed from him, she knew how much Heero despised guild paperwork.

Suddenly, the doors were pushed open as a young lady stepped inside bright and early. He could feel Magic, sense it from her so he knew she was a wizard. Blinking at her a few times, Heero wondered why she was up so early. Although he was a morning person himself. Maybe she was here to join the guild? Or to request a job of them? It was smart to beat all of the traffic that would come later on in the day by coming early if she was here to request a job. Plus the odds of the Guildmaster being here alone at this time were 1/10.

"Hello." Rose said, waving a paw at them and swishing her tail. "Welcome to Fairy Tail, the Guild isn't even open for the day yet...but we could probably take on your Job and send a wizard out later...unless you're here for something else?" Rose said politely, swishing her tail but leaning on an elbow and a paw as she remained seated, her tail going back and forth. Rose thought this young woman was very attractive, but for once, Heero seemed distracted by his own thoughts, staring out the window.

Re: Humble beginning [Saya's Introduction, Open to all]

Saya entered the guild with some uncertainty. It was almost completely empty, not surprising considering that it the morning was still young and everyone else were most likely home. The girl curiously observed her surroundings, finding herself in some bar-esque cafeteria that covered the entire open area of the first floor. But, the place wasn't completely isolated. Occupying the far end of the bar was a young man with his cat, both whom took notice when the doors were slowly opened and Saya entered.

The young man had unique blue hair coupled with matching eyes. He had a defined look given his distinctive attire and chiseled appearance, and Saya immediately recognized him as the guildmaster in person. There were talks throughout Magnolia of the handsome guildmaster, but she had never gotten to see him up close until now. She felt honored.

Next to him was his pet/partner, a very cute talking cat. It had feminine appearance and was red in color, and it quickly caught the young lady's attention. Saya always took notice of anything colored red and was very fond of cute animals and had to hold back the urge to cuddle the little exceed in her arms.

Funny enough, it was the cat that spoke to her first, as it seemed that the guildmaster seemed focused on something else. Saya nodded and smiled to the exceed who introduced herself as Rose. "Um..hi there, Rose. I'm Saya - Saya Tadeyoshi. I'm here early to join Fairy Tail, is it okay?"

Saya looked at the guildmaster, still despondent and unmoved while staring out the windoe almost as if he was under a trance. She was a little concerned, but the exceed assured that everything was fine and not to mind him zoning out. Saya nervously nodded and listened to the exceed's next question before answering. "Magic?...Well..."

She was better of showing it than saying it. Saya lightly bit the tip of her index finger, making a small cut for her blood to flow out. She then lifted her hand and slowly manipulated the droplets to form a shape resembling a ribbon. She twirled it slowly around her  before allowing the blood to return to her finger and heal her small wound. She sheepishly stared at the exceed, anxious for her opinion of her Blood Magic.
« View previous topic · View next topic »