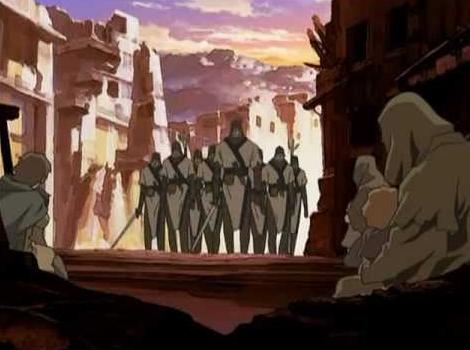 Narrator
(Voiced by Morgan Freeman)
And so we move on with Vanessa's tale...

Days pass since that fateful night in Magnolia Town, where we found our hero pitted in battle against the nefarious little turd known as Roger. Not knowing where to move on to next, she set off in a random direction. Her journey took her west, and ever so slightly south, to Era; home of the Magic Council Fiore branch. Word had not spread of what had happened in Magnolia Town, and our plucky young hero doubted it even would. After all, the couple would have to explain how their child came in possession of a mechanical suit...

So Vanessa had a brief respite; one that she enjoyed, at least for a time. Before long, she grew bored, and agitated, and edgy and frustrated. Her funds were near depleted once more and she soon found herself looking for work once more.

It soon came to her attention that trouble was brewing just south of Era, in the Ancient Ruins. A small village by the name of Quanny is besieged by a small army of bandits. Being the peaceful, quiet village types, the villagers are ill equipped to deal with this new danger.

And so Vanessa decided to go to this village, knowing that where there is danger, there is opportunity...

A frail old man stepped forward. “We have no hierarchy in this community,” he said shakily. “However, I am the town's spokesman. What is it you seek from us?”

A sly smile played across Vanessa's lips as she looked at the old man, her eyes flashing dangerously. “Old man, I hear your town has a bandit problem,” she said. “I'm here to negotiate my fee for helping you out.”

Several excited murmurs broke out from a midst the crowd. A couple of the villagers even looked hopeful. The old man nodded solemnly. “It's true,” he said. “They have been coming into town and taking our food, our possessions, and harassing us.”

“We'll give you all the money we have if you get rid of them!” someone called out.

“That's more like it,” Vanessa thought, struggling to keep herself composed. She was going to get rich off these people! At that moment, the crack of a gunshot rang out. Vanessa turned around and her expression darkened as she saw the army of bandits approaching. There was over twenty of them gathered at the far end of the road, and one could only imagine there were probably more hiding, waiting in ambush. At the head stood an especially dangerous looking individual, probably their leader. His red hair was wild and unkempt, hanging in a tangled mess that reached his waist. He wore nothing more than a pair of white, loose fitting trousers tucked into boots and a bandanna that prevented his hair from obscuring his vision. Vanessa found herself staring a bit longer than necessary, finding this rough and dangerous, manly looking man to be quite attractive. Then she pulled herself together and glanced sideways at the old man questioningly. “His name is Scourge,” the old man explained. “He can use fire magic, so be careful around him.”

“Oh yeah?” Vanessa scoffed as she cracked her knuckles. “Well I'm about to become his scourge.”

She turned to face the rest of the villagers. “Can anyone here even fight?” she asked.

A few people nodded reluctantly. Vanessa noted that they were armed with wooden poles. “Take out as many of Scourge's followers as you can, but stay the hell away from him,” she ordered. “The rest of you, go back to your homes and barricade yourselves in... or stay and watch, I don't really care.”

With that, she turned and stormed up to the bandits. “Scourge!” she roared in defiant challenge. “You've picked the wrong day to bully these people! Prepare to have your arse handed to you!”

She followed the remark by forming a tiny fireball and throwing it at the bandit leader, managing to strike him right in the face with it. He staggered back, more out of surprise than anything, caught completely off guard by the cheap shot. “So it's a fight you want, you little bitch?!” he roared in reply. “I am going to make you suffer!”

He gestured at his army. “Lay waste to this place,” he growled. “Kill everyone, take everything. I'm done with these pathetic weaklings!”

The bandits roared their approval and charged forth, brandishing a collection of daggers and knuckle dusters.

Vanessa gritted her teeth and bashed her fists together, waiting for the bandits to get in close. “Let's do this!” she yelled at the villagers who stuck by to fight.

There were five of them, and they looked like they regretted their decision to stay and fight. When the first bandit reached them, Vanessa met him with a punch to the face, laying him out flat on his back with a scattering of teeth and blood around his head. Then the actual battle commenced...