Bank of the Hell Queen

Bank of the Hell Queen

Fenrir 'Fluffy' Lycaon:
Species: Demon
Type: Legendary Combat pet
Description:
Fluffy has finally reached his full adult form, which is that of a giant white wolf capable of running at 200mph (Top speed) which takes him about a minute to achieve and can be maintained for long periods of time. At close range he is able to move quite fast to dodge strikes and strike at an opponent.  His claws and fangs are equal to legendary weapons. He is about 8m tall and about twice that in length. His claws are slashing weapons and his fangs are piercing. He is able to break through legendary rank weapons and armor in one hit and legendary(+) in a few. Cannot break through artifact grade weapons. Can break through A rank and below barriers and cannot break through S or H rank barriers. 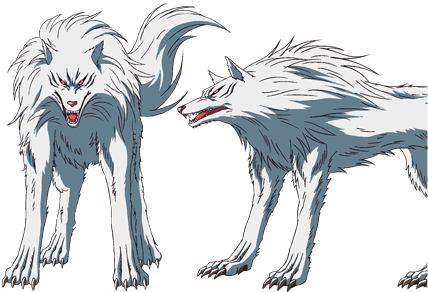 Big Stomach:
Rank: A
Description: Big stomach is the ability of Fluffy's species. It allows objects to be stored within them regardless of their size. As Naraku does not need this for storing weapons he has used this to store younger versions of his race, which are special as when killed they respawn within his storage. When this ability is activated ten smaller clones of him  emerge and attack the opponent. These will remain for four posts. If he is in his smaller form he can only send out a single  clone.

There is one variation on this technique, but it takes a lot of time and is quite painful for Fenrir. It can only be done once per thread, and prevents him using Big Stomach at all for the remainder of the thread. After one post of focusing he is able to generate a clone that is an exact replica of himself in that it is as big as he is, can move as fast as he does and strike as strong as he does. However, this clone will only remain for two posts and cannot use abilities. It is a major gamble and Fenrir will only use it in dire circumstances. He is unable to use this in his smaller form.
Strengths:

Transform:
Rank: B
Description: This ability allows him to change from his full size form to a much smaller form and back again.
In his small form he appears to the be about 1.5ft high and 3ft long. He is most commonly in this smaller form.

Whilst able to transform between these forms at will, whilst in his small state he does not have the super speed and strength of his larger form. In this smaller form he can't run more then 30mph and his claws and fangs are only equal to weak rank weapons. He is able to use his big stomach ability in this form, but it is far weaker, only able to send out a single clone.
Strengths:

Robe of the Hell Queen:
Type: Legendary(+) Armor
Description: Recently after the heavy damage she has received from missions Naraku requested that Fluffy returned to Hell in order to recover an item that had once belonged to her, but she had left behind. This item is a blood red haori with black markings on the sleeves. On the back is the Japanese symbols for Hell .

This haori is made of a special material that resizes to fit the user and is immensely strong making it able to not only resist spells, but physical weapons as well whilst appearing to be cloth.
Strengths:

Envy:
Rank: A
Description: One of her mother's most useful abilities and one she imbued into this object for Naraku. This allows the user to change their appearance entirely to match that of another. Naraku must of seen the person in order to allow for this to work and she can only change into the attire she saw them in. This transformation is perfect and includes changing the voice, accent and walking method.  The user is able to transform back at any time, but assuming another disguise takes time. This now also mimicks the scent and magic aura of the person making the disguise flawless.

Although the haori transforms to match that of another person's the area protected is still only that of the haori.
Strengths:

Hoard:
Rank: A
Description: The cloak contains a dimensional rift to an external dimension only accessible via the haori.  Due to the magical powers being dependant on the user the cloak is only able to store ten items inside it and these have to be marked with a special magic seal in order to be stored. This seal is Naraku's personal seal. She can reach into the cloak and pull out objects as if from nowhere. Nara is the only one able to pull items out. She is able to put into the cloak an object that is less than 12ftx12ftx12ft including living organisms.

Choker of the Hell Queen:
Type: Armor
Rank: Strong
Description:
A grey choker worn around the neck that is set with a strange gem, called a demon stone, that is carved into the shape of a skull. It protects the neck from harm. The choker itself is carved from the fangs of the elder demon of envy when she is in her true form and not her human shape.
Strengths:

Mimic:
Rank: C
Description: If an opponent hit her with spell on her that is C rank or lower Naraku is able to use this ability to create a Hell Demon Slayer replica of it. e.g. if someone through a fireball at her she'd be able to launch back a ball of fire, but it would be composed of darkness(despite looking exactly like the spell).  It mimics the last spell she was hit with so if she planned to use a fireball, but was hit with a lightning bolt before she did then she'd use the lightning bolt.
Strengths:

Ripper:
Type: Scythe
Rank: Legendary(+)
Description:
A large scythe with a black blade with crimson trim. This scythe is as tall as Nara, so  5ft7, with a two ft blade. It has a handle about 1/6 of the way down the handle (starting at the top) for extra control. The handle is also black with crimson markings.

Hell Demon's Slash:
Rank: A
Description: A swing of the blade that generates a slash of dark energy that cuts with slightly more power than the scythe itself. It has a range of 50ft. As the blade swings dark energy builds up on it before being launched off at the culmination of the swing. It travels its full distance in about 2 seconds. The slash is about 5ft in width.
Strengths:

Demon's Saw:
Rank:A
Description: The user spins the scythe around whilst charging the edge with dark energy. This basically turns the spinning scythe into a saw blade of dark energy with high cutting power. The user is able to have the edge charged without the spinning process. The charge lasts four posts.
Strengths:

Sin:
Type: Sword
Rank: Artifact
Description:
Sin is a demonic sword with a demonic eye set into the hilt, that actually moves and can see. The hilt also features ornamentation of a strange face. The blade length is about 4ft, and is sharp on both edges and the point. It is a hand and a half sword meaning it can be wielded either with a single hand or both hands.  This sword is actually sentient and capable of speech often warning Naraku of potential attacks as it can see through its one eye. Naraku favours her scythe over this mostly due to its versatility, but also due to the fact the sword can be quite irritating. The sword itself is supposed to only be wielded by the one to master the seven sins, but Naraku stole it and now wields its power. Unfortunately, because she didn't claim it the right way she only has access to part of its power, those of Lust and Wrath. Wrath because it often drives her and Lust because she was influenced by the demon of Lust. She was surprised it didn't give her the power of Envy, the demon she was raised by, but the sword said she already had plenty of that in her robe and choker. 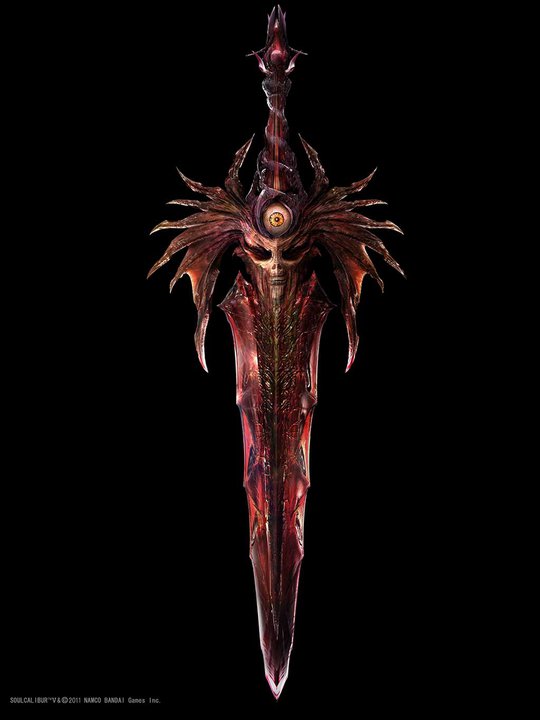 Wrath:
Rank: S
Description: This spell is interesting. It starts off by giving the blade a thin coating of shadow, that is only equal to D rank. However, with each successive hit the power of the coating increases by one rank until it reaches S rank, but if the user misses the power drops by a rank until it reaches D rank. When it reaches S rank it surges with power and can launch off two S rank crescent shaped slash that is 6ft in diameter and travels at 120mph for 150ft. The duration of wrath is five posts.
Strengths:

Lust:
Rank:S
Description: Lust is an ability of attraction, but in this case it is an ability of attraction to both a target and an opponent. Essentially, for three posts a large eyeball of dark energy is formed, approximately 3ft across. This travels at about 80mph and must remain within 350ft of the sword or it immediately dissapears and the spell goes on cooldown . Once Naraku targets someone with this it will aim to strike them, but should an attack be launched against Naraku it will attempt to move back and block it. So it is an offensive and defensive technique.
Strengths:

Breaker:
Type: Hammer
Rank: Weak
Description:
A large double handed, spiked war hammer with a head almost as big as her torso. It is black in colour except for the spikes which are crimson.
Strengths:

Hell Demon's Quake:
Description: The user charges the head of the hammer with dark energy and strikes an object with improved force. The area hit is subject to a shockwave that extends 3ft in every direction from the hammer's impact. This is merely enough to upset balance.
Rank: D
Strengths:

Biter:
Type: Axe
Rank: Weak
Description:
A large battle axe with a blade about as big as her torso. The blade is mostly black except for the edge which is crimson and there is a 0.5ft long spike at each end of the blade.
Strengths:

Hell Demon's Bite:
Description: The user charges the head of the axe with dark energy and strikes an object with improved force.
Rank: D
Strengths:

Stabber:
Type: Kyoketsu Shoge
Rank: Strong(+)
Description:
The stabber is a wrist mounted blade hidden up Nara's sleeve. This can be fired off by specific movements and then it is revealed it is connected to a long, thin, metal razor wire. This metal wire is 60ft long. The blade itself is only five inches long and about three inches wide. When it pierces an object a second blade, two inches long, comes out of the side effectively making it difficult to pull out. This can be retracted by another movement. The user is able to freely manipulate this weapon's trajectory with little movements.
Strengths:

Shocker:
Rank: B
Description: Naraku ,as the Hell Demon Slayer, sends dark energy down the length of the capable which causes an effect similar to an electric shock. This is not actual electricity, but the effect is similar to touching a plug socket.
Strengths: